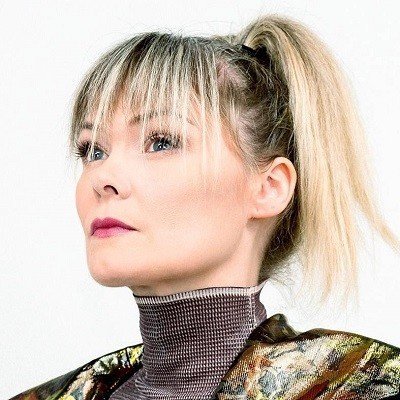 From the album “The Road Is Just A Surface”:

…to be predictable. It’s that combination of the instantly accessible and what she calls ‘the strange stuff’ that has made Anja one of the most exciting voices to emerge from the vibrant Scandinavian music scene.

Born in 1970, Anja Garbarek grew up around Oslo, the only child of composer/ saxophonist Jan Garbarek, one of the acknowledged geniuses of contemporary European jazz. As a child she was surrounded by musicians, but although she always loved music, she never learnt to play an instrument.

Instead, at 16 she went to drama college and imagined a life in theatre and film. But music was clearly in her blood. At college she sang in a stage musical which brought her to the attention of the Norwegian record industry, and she was offered a deal. The result was her debut album, 1992’s Velkommen Inn’ (Come On In). A concert tour followed, and it became obvious she was a natural performer with a unique talent.

Her second album, Balloon Mood, appeared in 1996, a more ambitious work recorded with Massive Attack/ Bjork/ Madonna producer Marius DeVries. One year later she moved to London – “something I had to do to grow-up” she says – and signed to Virgin Records. Her debut for the label, Smiling & Waving, was released in 2001 with contributions from Talk Talk’s Mark Hollis and Robert Wyatt amongst others. The album garnered rave reviews for its bold combination of electronic samples and acoustic instruments and her ethereal, other-worldly voice.

…came the much-anticipated follow-up, Briefly Shaking. Such gaps between records are standard for Garbarek. “Think of a painter having an exhibition. It can’t be rushed. Making an album is like that for me.”
Yet if four years is the average time Garbarek takes between records, the period since Smiling & Waving has been a particularly intense one for her. She became a mother and in 2003, the family moved back to Norway, experiences that have had a powerful influence on Briefly Shaking.

“Having a child was wonderful, but it changes your life,” she explains. “You can’t be so self-centered anymore and as an artist that affects your creative core. I felt my creativity was being suppressed. You lose yourself when you give birth. It turns your life upside down and it’s fantastic, but it’s frightening at the same time.”

Eventually, Garbarek began to write a set of lyrics that reflected her feelings. “I was reading a lot of books about crime and horror and that seemed to give me the dark language I needed to express myself.”

For her, songwriting has always begun with the lyrics. “Words have their own sound and rhythm and create an atmosphere,” she explains. “So, I started using these words and sentences and metaphors to create a set of stories. To me, the music is the soundtrack to the stories I’m trying to tell, and they become part of the story.”

As soon as she…

…began to write, she immediately felt better about her circumstances. “I felt like I was coming back to life,” she says. Anja Garbarek’s songs have always walked on the dark side. But the stories she tells on Briefly Shaking are surely the darkest yet.

Sleep is based on the true story of a woman who was kidnapped and imprisoned in an underground bunker. When Anja had written the song, she realized it was also a metaphor for her own predicament. “It’s me in that bunker,” she says. “It’s about will I be able to get out and be born again.”

Can I Keep Him? was inspired by reading a book about the mass murderer Dennis Nielsen, while The Last Trick was written at a particularly dark moment. “I thought it was going to be my last ever song. Literally my last trick,” she says. The song also contains the line that gave the album its title.

Once she had her stories, she had to construct what she calls the ‘soundtrack’ to them. Because she doesn’t play an instrument, Anja believes she approaches music in an unusually open-minded way. “I don’t really know what’s possible and what isn’t, so I’ll try things that you’re not meant to do.”

Key to realizing her vision was Gisli, a multi-talented Icelandic-Norwegian artist whose debut album was released on EMI in 2004. “I met him by accident when I was checking out some studios,” Anja Garbarek recalls. “But he was my rescuer and I knew from the first note I heard of his music that I had to work with him.”

…was Anja’s father. “When it comes to the big stuff like strings and saxophones, I’ve always worked with him. That’s my favorite part of making a record. Through that I’ve come to know him as a person, not only as my dad.”

One of the most striking elements of Briefly Shaking is the way Anja Garbarek uses her voice as another instrument within the music to create what she calls “sound pictures with words.” In the past, her voice has been compared to the likes of Bjork and Stina Nordenstam. But she says the female voices which have really inspired her are those of Kate Bush, Laurie Anderson and Billie Holiday.

In Norway, Briefly Shaking has been hailed as her most commercial release to date. “I know people have said that, and I certainly think this album has more grandeur and a bigger sound,” she admits. “I didn’t use drums on my last album. This time the mood is so dark, so I wanted the drums to hold the listener’s hand. But take the grooves away, and there’s still some very strange stuff going on there!”

Anja was approached by Luc Besson in early 2005 to write the music for his latest, and possibly last, directorial release “Angel-A”. A beautiful film shot in black and white and staring Jamel Debouze (Amélie) with Paris as a backdrop. Music from Anja’s last 3 albums features heavily as well as a number of new pieces written specially for the film. Luc picked Anja to write the music as he had been listening to her early CDs when he initially wrote the script and gained inspiration from “Smiling and Waving”.

In August 2019 Anja Garbarek returns with her first album in 13 years: The Road Is Just A Surface; an album that is a captivating blend of light and shadow, melody and drama. It is a story about the longing to move on.

All links to Anja Garbarek´s media