Elemental Tangents is a project of Tracey Swain & Steve Paine and was featured in episode #90, broadcast on 26 May 2017 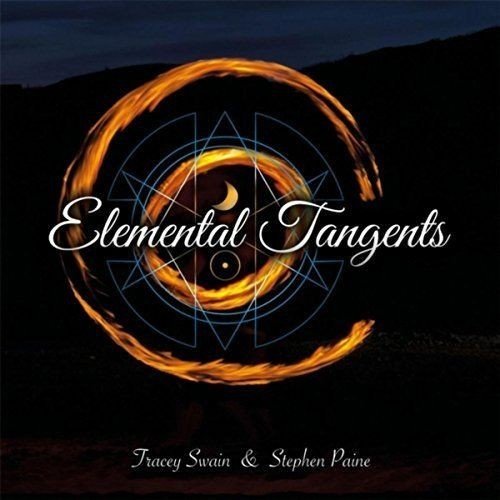 From the album “Elemental Tangents”:

Many Moons ago doing my…

…photographic degree I said to a very talented artist friend of mine that I wished I could draw/paint like him. His reply was “But you do, you paint with light”! The name has stuck ever since, along with the nickname “Tangent”, given to me by a friend’s son. On listening to my conversation in the car one day, whilst I was showing them around Shropshire, he stated very loudly and firmly “I’m going to call you Tangent, cos you’re always going off on one. Where are we going now?”…

I guess my life has been a series of tangents. In the darkrooms of London’s West End I started off as a darkroom technician at the tender age of 20 and, after retraining at the London College of Print and Design on a Photolithography degree, I ended up running a digital reprographics bureau, out-putting litho-plates for a large, direct mail web printers in Kent for many years in my mid 30’s. I then moved on to packaging and the printing of boxes and cartons. My entire life has been involved in either photography, painting with light or ink. Whether in advertising, media, promotional marketing, record labels, model portfolios, printed magazines, brochures or pack shots, it has never been dull!

…went off on another tangent, one totally out of control and not one I was expecting under any circumstances. I separated from a guy I had spent 21 years of my life with. The following year I had a rather nasty accident at work rendering me unable to work, I suddenly found myself with a whole new tangent to deal with. In February 2007 I discovered Shropshire. I utterly fell in love with the landscape, wide open skies, hills and rolling valleys enshrouded in mists; my very own ‘Brigadoon’. After only two days I decided that here was somewhere I could relearn to live my life, heal and slow down as the doctor had ordered. So three weeks later I moved here (yes, I do spur of the moment) and have never really looked back.

I run a small reprographics design company, TnT-Photoart, and have designed and created the concept of ‘Visual Verse’ books through ‘Briar Ridge Books’, which I run with a local poet, to produce books that fuse images of the surrounding landscape with poetic verse, with a little bit of mystery and magic rolled in.

However I have always had a huge love of music, and it has been part of my working life all my life! It helps me heal, soothes my soul and is normally playing in the car when I am out and about searching for a landscape to inspire me. So it was only natural for me to want to weave these two passions together in a project somehow at some point in my life.

I guess that point is now here, for here we have “Elemental Tangents”.

Steve Paine is a composer, musician, producer and sound engineer. His principal output has been through the auspices of his long time band LEGEND. A band that has existed for over 25 years and has evolved from a Folky Progressive Rock band into a major player on the Symphonic Metal scene.

He is also a hard working Sound Engineer working in both concert and studio environments and everything from Punk to West End Shows or recitals of Early Music in tiny village churches. Steve does them all. He is also recognised as a Producer, not just for his work with LEGEND but with various other artists including Inkubus Sukkubus, Mr So&So, The Magic Mushroom Band and The Rattlers.

Steve is a multi-instrumentalist though he normally focuses on Keyboards or Bass. However for Elemental Tangents he has allowed himself to expand his range and approach to create an audibly stunning aural setting to some of the most vibrant and atmospheric landscape pictures you are likely to see anywhere.