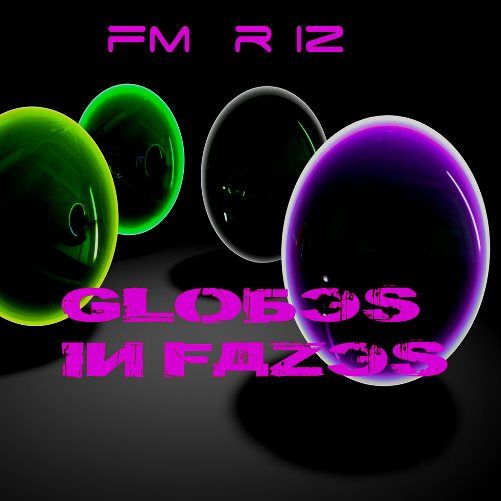 From the album “Globes in Fazes”:

FM R IZ (Ephemeris) is the brainchild of Craig Caudill, an artist and dabbler of all things creative. He is a former installation artist who turned author and electronic recording artist. He is most at home, concocting sounds to inspire his literary endeavors. His latest release is “Green Neon Nights”. To stay creative he quickly shifts from music to writing dark fantasy noir to avoid the creative blocks and pitfalls that stifle a creative person’s momentum.

Recently he was made his radio playlist debut on Dice Radio on March 24th. This was a 90-minute’s playlist which was played four times in a row.

In the early ’90’s Craig Caudill has been behind the scenes of art and literature. His first garage band was “Thought Lords” which finally grew into “Slughead”, which was an expanding project. In this project many members joined in when necessary, depending what instrument they were playing. But mainly the core band was Craig Caudill and Greg Willhelm-Olsen.

1995-1999: He wrote screenplays and poetry unsuccessfully, nailed any film projects but he honed his chops to gear up for the next wave of serious creative work that was more concrete. After a failed attempt of making a short film, he later filmed large amounts of experimental video. These videos were to be mixed with music from electronic artists from all over the world, eventually giving him awards and gallery work.

2001-2005: Craig Caudill worked and toiled on making video installation pieces in rustic galleries and upscale electronic media festivals, both locally and in Germany and France.

2013-2014: Craig Caudill as a home recording artist has created music on a simple app which he called the project “Red Wave” which slowly became “Stone Broxxa”. The latter was inspired by a hospital nightmare where he was being pecked from a ceramic tiled opening in his abdomen by a black bird. Briefly he was recording under the name “Cloned” in Brazil. After releasing five albums under his own name, “FM R IZ” was born.