John Luttrell was featured in episode #62, broadcast on 11 November 2016 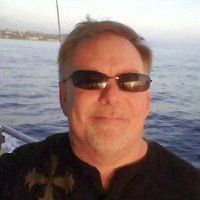 From the album “The Corridors Of Time”:

From the album “Flying Lessons”:

John Luttrell is a composer and producer of electronic and acoustic music. His works include solo guitar and piano, ambient and progressive rock, as well as scores for films and multimedia.

A “citizen of the world” John was born in Venezuela in 1957. Growing up he lived in the US, Libya, Nigeria, and Switzerland. In the early 70s, John became immersed in the music of groups such as Yes, ELP, Pink Floyd, Genesis, The Moody Blues, Tangerine Dream, and Mike Oldfield.

At the height of the 70s British rock explosion John was in London and joined the band Chillum, playing both guitar and organ. Luttrell went from London to Phoenix, Arizona where he studied electronics engineering, to explore his interest in synthesizers and electronic music.

With the release of Underwater Flying Lessons in 2000, John embarked on a journey into Atmospheric Music, followed up by A Sense of Impending Levitation (2004), The Corridors of Time (2007), and The Dream Exchange (2014).

All links to John Luttrell’s media