Kuutana was featured with his projects Sequential Dreams and Luna Firma in episode #62, broadcast on 11 November 2016 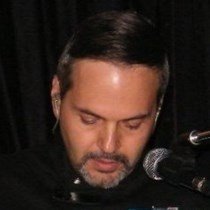 Sequential Dreams – from the album “Theory Of Love”:

Luna Firma – from the album “Theory Of Love”:

´Kuutana´ is the artist name of Canadian multi-instrumentalist, composer and producer Ron Charron. He has released more than twenty albums in the ambient, new age, chill, EM and psychedelic progressive rock genres.

He is a member of the part-time faculty and also teaches music and digital media interest students at Algonquin College in Ottawa, Canada, where he was previously schooled in digital music production.

Kuutana has released music under the project names Sequential Dreams and Luna Firma.

The Sequential Dreams project, launched in 2011, has evolved through the sequences and spirals of berlin-school influenced electronic music, at times bordering on instrumental electronic rock. The project has featured an international cast of guest artists with similar influences over the years.

Also to feature in the upcoming album set to release early 2017 is Arend Westra, known for his work under the ‘Eagle’ project name.

The Luna Firma project was launched in early 2016 with a debut release called ‘Falling Towards Atlantis’.

In its latest release the ‘New Horizons’ album, themed after the NASA space mission to the outer reaches of the solar system, also features co-founders Kuutana and Eric ‘the’ Taylor, both known for their previous ambient music solo and project work. The latest album projects sounds and ambiences which at times reminds of Vangelis and others of ambient composer Brian Eno.

All links to Kuutana’s media