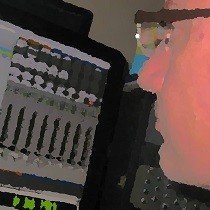 In pursuit of science, technology, and music from an early age, Ladd Allen Doane endeavored to create something from nothing so to speak. With inspirations such as Ascendant, Michael Stearns, Edgar Froese, Pete Namlook, and many others, LAD began writing, arranging, and recording independently in the late ’90s .

At the turn of the century, Opcode ceased its development and Apple released its Power MAC G4. This provided an opportunity to work with Avid’s ProTools LE until its discontinuation in 2011. A few years later Logic Pro X became available in 2013.

LAD continued to stay on track producing, writing, and composing. Building and merging into realms of sound and mathematics. Advances in computer-aided composition and distribution provided more and more opportunities to create a presence within the Internet of Things.

If artists, in part, are born not created, then Ladd’s life and art demonstrate this axiom. Music has been Ladd’s passion as far back as his memories stretch. Both classically trained and self-taught, Ladd combines the two to create a unique sound born of his mind and soul. His music entices and invites the mind into worlds yet to be fully explored, and spaces where the soul, heart, and eternal energy of existence are at once, joined together, and separate. This auditory combination gives life to itself in his music, allowing the sensory experience to be had in endless facets, as the sound of his compositions and the intricacy of arpeggios and voices serve as a vehicle for transcendent auditory discovery.

In a world where electronic music sometimes becomes homogenized, Ladd’s sound is unique not only for its individuality, but the energy of which it takes ahold and wraps around the listener. In other words, one doesn’t just hear his music, one LISTENS and is made part of the sound, surrounded by the notes, swirling and drifting in spacetime, seeing things the eyes cannot detect, hearing with the soul, and feeling the corporeal self-release into the energy that flashes in and out around the listener. His music incorporates the senses so that the notes and sounds are no longer a different entity, but a part of one’s mind, opening the emotions and breaking through barriers to higher spaces of experience, and sensory awareness.

All links to LAD´s media