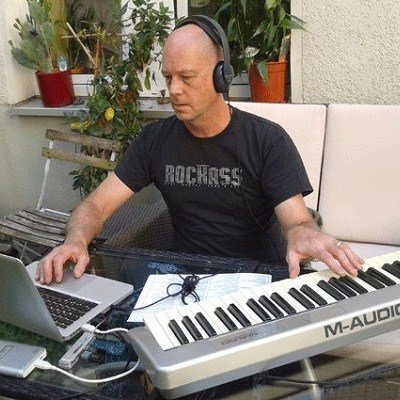 From the album “Flying Over Shanghai”:

Chris Lastelle is a multi-instrumentalist and the powerhouse behind production at Pebble Music, a renowned music production studio in Berlin, Germany. Artistically Chris Lastelle goes by Lastelle.

The good old Synth and a Tascam cassette recorder were the beginning of my first studio back in Sydney many years ago! My recording studio was my passion and I poured (almost) every cent I earned into constantly improving it while still carving out a solo career. In early 2000 I was selling my music overseas, going on tour, and generally misbehaving. Then I made a plan to re-locate.

Chris Lastelle moved from Sydney to Berlin and now has a fabulous recording studio in the historic, retro DDR era Funkhaus. Also, in 2011 he partnered with Melissa to combine all their work and services under Pebble Music.

It’s considered a tough time to start a traditional music label but Pebble is about the artists and the music and we put that above all else.

I’ve got my passion right here, sitting right next to my coffee, I’ve got heaps of knowledge on the shelf, and I’ve got a growing list of truly individual and sensational music to produce I am living (in) my dream.

The album “Flying Over Shanghai”

The album and concept came from combining Chris’ 2 favorite things: music and travel. Chris Lastelle had a 4 day stopover in Shanghai, travelling back from Australia to Berlin. The experience filled him with musical ideas and visual stimuli.

The music was directed by a number of travel experiences:

All links to Lastelle’s media