Lehel Vandor is an ethnic Transylvanian Hungarian author who grew up in Romania under the communist regime of Ceausescu. Lehel Vandor was a high schooler in 1989 when the Revolution happened.

It changed his world from one that was absurd and limited, but stable, to a chaotic one in which everything had changed overnight.

“Ears” is the memoir of Lehel Vandor. It is a personal journey of a Transylvanian Hungarian ethnic child of Ceausescu’s dark ’70s. He was a teenager during the suffocating Romanian ’80s, a student during the surreal ’90s and an emigrant of recent years.

“Electronic escapism in dictatorships” is perhaps not the most accurate title. After all it is about one specific former communist dictatorship and how people could access music that escaped the censors’ net.

Reproduced with permission, an interesting chapter from Lehel Vandor’s autobiographical “Ears”. This memoir is based on experiences of his growing up as a kid during Ceausescu’s infamous regime in Romania. It gives an insight into how one could listen and obtain certain music, especially ideologically approved electronic music, in Romania during that regime.

In a world where we access just about any music from any era at a click of a button, the concept of spending 3-4 years chasing an album and then acquiring it via a fourth-hand tape to tape copy, well, is an alien one. It is hard to relate to what music fans went through back then.

So here it is, a chapter from Lehel Vandor, dedicated to more imaginative music. Music that served as means for escapism in a world that we can imagine with difficulty nowadays. 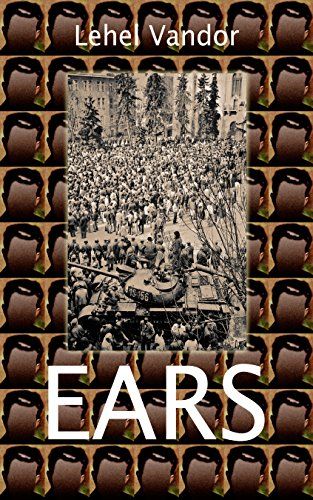 …the official attempts to restrict the importing of contemporary Western pop & rock albums, we could get them from the so-called copying studios. These would have been chronic insomnia-causing horror visions for any copyright lawyer in the Western world. We used to go to these studios-cum-shops with a few cassettes in our pockets, and ordered from a huge catalogue of recordings; then, a few days later, we walked away with 60 or 90 minutes of music copied onto those cassettes.

That is how we got our hands on pop and rock albums for our weekend school bashes or house parties; but, more importantly, that is how many of us got hold of entire catalogues of jazz, progressive rock and electronic/space music.

The owner of the copying shop on the Kossuth street, located very close to my home, was extremely passionate about his music. He had immense amounts of LPs and reel-to-reel tapes. His wife used to sit at the tiny counter of the tiny shop, and I could see bits of the larger recording area behind her, with many blinking lights on the tape recorders.

I got hooked on…

…“odd” music at an early age and I was a regular customer at the copying shop. I was ordering a lot of electronic music and progressive rock; the large, bearded shop owner was like a musical wizard for me. After all, he could charm magnetic particles into a secret order, so that they could bring to life glorious, and so hard to find, music in my room.

Usually, the process of discovering such music was tedious, but extremely rewarding. I used to stay up late on Sunday evenings, so that I could listen to Florian Pittis on the radio. He was one of the very few people in the country who owned a huge collection of rock and jazz albums. I am not sure, how he acquired it, how he managed to become the only person allowed to have a radio show like that.

In his weekly hour-long program, he used to talk about some album. Then he played it in its entirety, ending the show just before midnight. No wonder that many progressive rock and ambient music albums were seriously augmented by one’s experience of hearing them on the radio, in the dark, whilst one was floating right on the boundary between reality and dreams. To this day, whenever I can, I listen to such records in the dark. Mostly due to those late Sunday evenings of musical wonder.

…something on the radio that I really liked, I used to beg my parents for some pocket money. I used to put together enough to buy a cassette and pay for the copying – then I ran to the bearded wizard and his less magical-looking wife.

If I was lucky, he had the album in his catalogue. There were albums, though that I only acquired many years later. Some were rare so I had to hunt for them via friends in other towns. I hunted for them until I managed to obtain a third-hand cassette copy of the music. The sound quality was not exactly awesome.

Quality did not matter so much after such a long quest. It was music that used to hover above a gentle, wavy jungle of hissing and popping. It were the results of vinyl-to-tape copying followed by many tape-to-tape copies. Rilke wonderfully put it as: “Music – the breathing of statues”.

Music – so mesmerising, that a kid could spend years trying to get his hands on it. Years! An entire underground network of music fanatics existed back then, and we used to help each other with tapes. The luckier ones possessed LPs produced in much more liberal communist countries like Hungary and Yugoslavia.

One interesting side effect…

…of all this was that we really only ever acquired the music itself. In other words, we were often completely disconnected from the visuals and the paraphernalia that used to accompany the creators of, for example, progressive rock albums. While their showmanship had risen to by now proverbial excesses, we only had their music. Music without the hype and the decadent imagery. Therefore, I still firmly believe that we had a unique chance to connect with the music without the influence by the persona or media image of a certain artist. This, in today’s world, is inconceivable.

Another place of musical treasures was the so-called listening room of the city library’s music archive. Latter contained tens of thousands of mostly classical albums. As a magical coincidence, a bearded fan of electronic music and progressive rock ran this department of the library.

I was about eleven years old when I discovered those dusty rooms, which had a dozen or so desks. Each desk had a turntable and a pair of headphones. I used to spend hours and hours there, browsing through the catalogue of small, alphabetically ordered cards. I asked the staff to bring the vinyl, and then giving it a spin. By the time I got to high school, the bugs of electronic and prog-rock music had terminally infected me.

The opening of a…

…listening room in an old building, which has been hosting the huge library assembled by the late count Teleki, was pure joy for us. On Sundays, the room was always empty in the morning. So, without disturbing anyone, the administrator could play us one of his favourite tapes or LPs. He played them on the huge speakers of the listening room. He used to enchant us, musical pilgrims. And he did so with a sound quality that I could only dream about when I listened to my portable cassette player.

Thus, many Sunday mornings became strange, but wonderful musical journeys through space and time. Space, because the music always took me to worlds, which I was inventing in my head as the sounds unfolded around me. Time, because it was a wondrous transition from a walk through the old corridors of the building. A walk through up on the loudly creaking wooden stairs, to the futuristic electronic soundscapes that emanated from the speakers.

There, I had the opportunity to listen to some minor, but passionate sonic experiments, too. The administrator took Jean-Michel Jarre’s mesmerisingly fluid, otherworldly Oxygène LP. He patched the turntable to four bulky speakers via a quasi-quadraphonic setup. I could sit in the middle of the room. He walked out, and left me there with sounds that turned my mind and soul inside out in ways I could not imagine before. It was music that sounded as if it had not been played by a person. Instead, that music was simply happening, it was floating in the air between the thick, old walls, without human intervention. Yet it was deeply human and vibrant.

…was the space where I managed to travel to the Himalayas, helped by Vangelis; to the thinking ocean on the planet Solaris, helped by the Japanese magician of sounds, Isao Tomita and to countless hypnotic planetary landscapes, helped by Klaus Schulze and Jean-Michel Jarre.

If I think back to the various “tribes” of kids in school and later high school, to the groups of heavy metal, prog-rock, and electronic music fans, it is clear to me now that we were not self-consciously choosing to consume western pop tracks only as party music. It was something subconscious I believe: music that expressed something and works that had been created based on elaborate concepts were vehicles that could take us away from our often-nasty everyday reality.

Without any inhibitions we used to discuss what we had been imagining during our listening to such records. We used to get together. We play some record, turn off the lights and switch to some other reality – without any chemical aids. Thus, without any snobbery, and via genuinely drug-free escapism, by our late teens we built up a quite deep knowledge of rock, jazz, classical music, and opera.

…while I am clicking through some music mail order website, I still cringe if I think back how I had spent many months, sometimes even years, with the quest for some music that I had heard on radio.

How could some sounds get one on the verge of a sweet obsession? It is probably not an accident that we had chosen music, which was always far removed from the world of everyday trivia. In my case, it was usually space music or progressive rock. Genres both highly addictive in their ability to depict some fascinating and very different world.

I loved to be made to feel tiny by such music; however, that sense of insignificance was not the nasty one, which the regime had wanted to create. It was, well, some kind of cosmic insignificance, which made us, the teenagers-turned-space-romantics, realise that none of the grand propaganda speeches meant anything.