Michael Brückner was featured in episode #65, broadcast on 2 December 2016 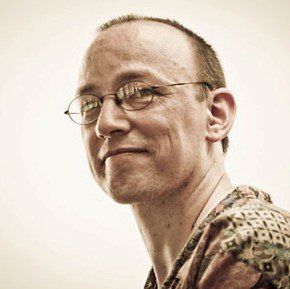 From the album “100 Million Miles Under The Stars – The Supplementary Volume”:

Michael Brückner is an ambient and electronica artist from Germany. He was born in the university city of Heidelberg in 1969 and grew up in a small nearby town. In the 1990s he moved to Mainz, where he earns a living for his little family as a graphical designer and pre-print expert. These are the two professions that he has studied between 1991 and 2003. Before engaging in music, Michael was also active as a painter, illustrator and writer. As such he was active (but not exclusively) in the field of science fiction, fantasy and related genres.

Michael Brückner started producing music rather late, in 1992, first working with 4-track tape recorders. In 1997 he switched to hard disc recording. His music reflects influences from the Berlin School and other “classical” electronica, classic ambient music like Brian Eno or Steve Roach. But Michael’s music also reflects the work of younger bands and artists like Future Sound of London, Underworld or Mouse on Mars.

Very prolific and highly creative, he has accomplished more than 110 full length albums so far. All of them were self-distributed until 2012 (and most of them still are). His first official label release was “100 Million Miles Under The Stars” on SynGate. It was his 100th album!

However, in 2006 Michael Brückner started to present parts of his work on different social network profiles. Some of his albums have been reviewed for both print and online music magazines. A number of radio stations all over the world continue to air some of his music.

Due to the necessity of his day time job and family situation, he is rarely able to do live performances. Nonetheless, he performed on different European EM festivals from 2012 on (Raumzeit Festival, Cosmic Nights, E-Live and others).

All links to Michael Brückner’s media

‹ Dance film “A Touch of Oblivion”