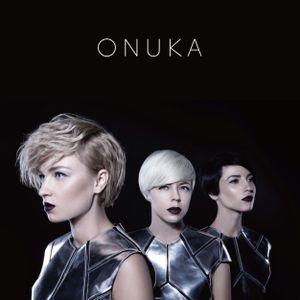 From the album “ONUKA”:

ONUKA is a joint project of the famous Ukrainian sound producer and musician Eugene Filatov (The Maneken) and Nata Zhyzhchenko (former vocalist of Tomato Jaws and Kooqla). The first single of ONUKA was released in 2013. In the fall of 2014 Nata and Eugene presented the debut album ‘ONUKA’. It includes the hits-songs ‘Look’, ‘When I Met You’, ‘Time’ and ‘Misto’. In the winter of 2016 ONUKA announced the launch of their own label Vidlik. The first release of the label became same-name titled 5-track EP.

The signature sound of ONUKA is an organic mix of electronica, modern pop music and Ukrainian folk instruments.

ONUKA performed with the NAONI folk orchestra as the interval act at the 2017 Eurovision Song Contest in Kiev, capital of Ukraine, on 13 May 2017. Their performance was seen by the immense number of over 180 million viewers.

The interval act at the Eurovision Song Contest 2017

Nothing is accidental. A series of events goes hand in hand with ideas and thoughts, which in the right moment form amazing combinations. That’s how something unique is born ¬– worlds and concepts, width and depth of which grows and multiplies. The story of ONUKA is a striking example of that kind of combination. Two talented musicians – Eugene Filatov and Nata Zhyzhchenko – came to creation of joint musical project already having a ponderous creative baggage behind.

Eugene is an experienced sound-producer, creator and a frontman of The Maneken. Nata is an ex-vocalist of deep-house three-piece Tomato Jaws and a band Kooqla. Together they are strong creative tandem in which Eugene is responsible for innovative modern sound production, meanwhile Nata is the face and the soul of ONUKA. The name of the project (‘onuka’ means ‘granddaughter’ in Ukrainian) refers us to Nata’s grandfather, who was a famous craftsman of traditional Ukrainian musical instruments. His most precious gift – handmade sopilka – is a kind of a symbol and an essential element of many ONUKA’s songs.

ONUKA’s music is the bridge between the past and the future. The rich heritage of Ukrainian ethnic culture in the context of modern electronic sound acquires the weight, status аnd nobility, that has always been inherent to Ukrainian musical tradition. ONUKA is the first who managed to convey this to a wider audience, convincingly and with the taste.

The debut album ‘ONUKA’ became one of the most important releases of 2014 on Ukrainian scene. It topped the albums chart on iTunes and got a lot of good reviews from music journalists and positive feedback from other musicians. With the release of the album (it’s also available on vinyl), it became clear that ONUKA has set a new benchmark for Ukrainian music.

ONUKA’s frontwoman Nata Zhyzhchenko and sound-producer Evgene Filatov (The Maneken), having achieved significant success (each in their own projects) in the field of composing deep house, disco house and electro-funk, decided to do everything differently within ONUKA. Their territory is the crossroads of many genres. The beautiful scenery of the dreamy electronica, cold nordic melodies and sophisticated digital disco. And, of course, the chemistry. It occurs here it the junction of all things innovative, futuristic, deep and root. It is in the blend of trendy arrangements and elements of Ukrainian folk music, of which Nata is impregnated since the very childhood.

This album is the benchmark in the hypothetical genre folktronica. Deep and mystical ‘Time’, the dedication to native city Kiev ‘Misto’, stylish and vibrant ‘When I Met You’ and ‘Look’ – the album ‘ONUKA’ is to the top full of hits. This is an album without weak songs. It can hold many ties and parallels – from the XX and Haelos to Ten Walls or SBTRKT. It’s gratifying that these parallels are not convex, to the casual glance they are not visible. ‘ONUKA’, with all its sonic diversity, is not an amusement for the music lover, not a celebration of eclecticism. Rather, it’s the monolithic alloy. It is the album, which claims to be the birth of an entirely new musical aesthetics.

‘Vidlik’ is a kind of sequel to the successful debut album ‘ONUKA’. A 5-track EP, released in winter of 2016, develops and supplements the ideas, embodied by Nata Zhyzhchenko and Evgene Filatov on their debut long-play. The single ‘Other’ immediately makes it clear – the symbiosis of electronica and live folk instruments, with which ONUKA surprised everyone two years ago, is already brought to the absolute here. There’s more sensuality and depth in Nata’s voice. Eugene’s arrangements are on the level of the experience of Henrik Schwarz or, for example, Damian Lazarus. His method itself and the quality of the sound fit perfectly into the overall European trend – innovative electronica actively absorbs the ethnic music of different countries.

The single ‘Svitanok’ is the life-affirming pop hit, every note of which is full of winter freshness and sun rays. It is noteworthy that the fragment of the poem of Kiev street-art artist Jerzy Сonopie is used in the lyrics of the song.

Monumental ‘1986’ is poignant and tragic. This is a story about the tragedy at the Chernobyl Nuclear Power Plant. Intimate ballad put on a trip-hop beat. Over the music we can hear an archive recording – the voices of the operators who worked during the explosion of a nuclear reactor. One of the liquidators of the consequences of the accident was Nata’s father.

The most unexpected, bold, experimental track of the EP is ‘Vidlik’, which ironically has become its hallmark. Bouncy, energetic house beat, beating in the forehead bass hook and animal energy, delivered to each listener by exotic folk instrument ‘bugay’. Music video of this track impresses with quantity of images and visual ideas, which was embodied by talented Ukrainian designer and decorator Lesya Patoka.

ONUKA live show is a carefully thought-out program with its own internal dramatic composition and special atmosphere. It’s an intimate experience in which each listener is left alone with the artist’s music. At the same time, it’s a powerful pressure of energy that can cover bigger venues like a wave.

The concert cast of ONUKA is eight musicians: vocals, keyboards, rhythm section and folk instruments – two trombones, French horn, bandura and bugay.
The audience will find many surprises at almost every ONUKA show. Nata plays some parts on the Theremin, uses unique MIDI-Controller – the Tornado glove; overall concept complements the visuals. And finally, Evgeny Filatov (The Maneken) appears on stage to perform some of the tracks.

All links to ONUKA’s media