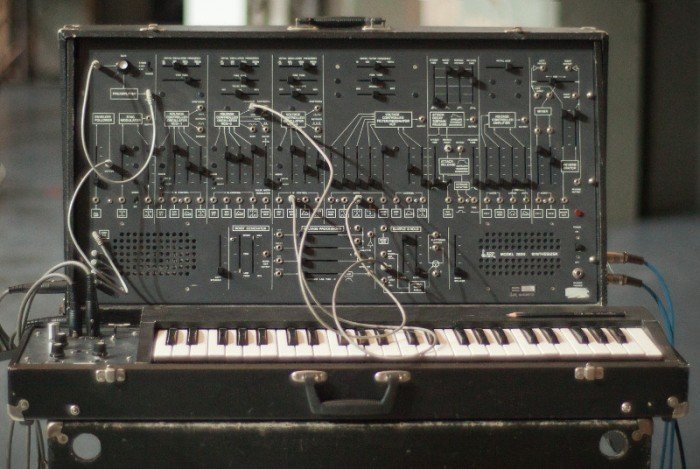 As to a retro synth revival…

…Behringer has recently announced then materialised their plans to make affordable “clones” of legendary instruments like the Minimoog, ARP 2600 and the like… One might feel we are landing in the world of the great philosophical sci-fi writer Philip K. Dick‘s seminal novel, Ubik.

In Ubik, reality regresses such that even the most advanced objects inexorably metamorphosize into earlier, vintage, versions of themselves.

Combine this with a superlatively postmodern situation, where not only the most technologically innovative manufacturers constantly obsess about their legacy and release endless variations of their legends of yesteryear, but… also other manufacturers start to see cheaper imitations of these retrospective gems as central to their product roadmap and their related marketing strategy.

Hopefully nobody is denying the fact that the Minimoog Model D, the ARP 2600 and Odyssey, the OSCar, and various other instrument creations were and are gems, era-defining legends, et cetera, et cetera.

Their sound is truly unique, and plugins, digital models and recreations can get close but never quite equal the personality of these vintage greats. It is akin to buying a superb hackbrett or theorbo from centuries ago, for their exquisite and unmistakable sonic personality.

Making affordable versions of them, even if not quite exactly identically sonically and quality-wise, is commendable – let’s face it, even remakes of the originals are often vastly overpriced, contradicting the realities of their manufacturing costs that have plummeted. People can get their hands on these vintage greats, if they cannot bring themselves to dish out vast extras for the name or the “legend”.

The painful reality for the great fans of great vintage gear is that in recent years the only true innovation has occurred in the world of the (in many ways understandably despised by analogue purists) software plugins and virtual modelling gear.

This, in itself, shows a macro trend that should not be neglected for its symbolic significance and betrays a very deep problem in what was the most innovative musical field.

While there were huge leaps in the processing power and the mathematics that can create, modify, shape and bend sounds in never before thought to be possible ways, these leaps have been turned into musician-usable realities by mostly software engineers churning out plugins and standalone software synths.

We had Camel Alchemy and Spectrasonics Omnisphere, Monark and Reaktor, even the truly deep expansion packs for Ableton Live, unleashing and making practically usable the deepest and most abstract signal processing concepts (think granular synthesis or physical modeling of impossible in reality acoustic processes)…

While we had all these inundating our Macs and PCs, with unprecedented creative possibilities… the big names and not so big names were obsessing mostly about re-iterated retro legends they produced many years ago.

Let’s face it, they have inherent limitations in sound palette and, no matter what yours truly or any analogue fan may wish to say, they represent a tiny, absolutely tiny, portion of the state-of-the-art sonic landscapes at our fingertips in the studio.

When the big names and smaller names were not embarking on time travel (backwards), they were, at most, adding more FM operators and bigger RAM and ROM to their machines, more disk or SSD space, more sound libraries and more pre-existing synth engines under the bonnet.

…all hugely overpriced for what they are (as shown by price trends and frequency of occurrences on second-hand markets), but essentially have they added anything new to previous mighty synth workstations? They are more powerful, but the deja-vu feeling is of Dickian proportions.

In a synth enthusiast group recently someone asked, when and what can we expect as the “next big thing” in terms of sonic innovation.

Indeed. Musicians and technologically apt sound sculptors alike may not be able to predict what the next thing could be, they may have a number of suggestions in terms of what the gear could improve on to be more real musical instrument.

Also, if we then focus on the sonic possibilities, and forget the unfortunate and unmarketable cases like the (otherwise absolute genius) Neuron, then we do not have to get a mental hernia trying to fathom what next technical innovation could be.

We could just ask the big and not so big names, who absolutely have the know-how and capability for this, to provide many of the landmark and novel synthesis and processing methods we have in not often very spontaneously controllable plugins as, at least, parts of physical synths.

Even if they caught up with where plugins have managed to go in terms of sonic possibilities, that would already be evolution.

However, while we are…

…NAMM after NAMM and MusikMesse after MusikMesse treated to more and more variants of retro(spective) gear variants, with superficial additions and numbers games (how many synth engines, how many gigs of sample space)… we can only dream.

The generation that can now easily afford the retro gear that shaped the sounds of their youths are buying in vast numbers the sometimes truly bland variations of retro gear, then flood eBay with them after few months of “fun”. It is the same phenomenon that happened to motorcycles… a whole generation that could only dream about them could suddenly afford them later in their lives, and it became a social trend driving whole segments of the market for a while.

The resulting electronic music is hopelessly backward looking, (mostly) hopelessly and relentlessly rooted in the past. There is nothing more tiring than looking at and listening to 1970s arpeggios and step sequencing dressed up in 21st century robes by the extra technological oomph that modern gear can create, but in a desperately and hopelessly retrospective manner.

There is entire “new” genre, synthwave, with…

Recent demos of otherwise very capable and imaginative new analogue instruments like Arturia MatrixBrute were “fascinating” according to some media, whilst they sounded (intentionally) exactly like sequencer runs from Tangerine Dream‘s classic Ricochet album… released a whopping 42 years ago… It is symptomatic of how some perceive “progress” in a hopelessly retrospective and nostalgic manner.

It is deeply worrying, or it should be for those “innovators”, that musicians who come from vastly different background (think of classical minimalists and piano visionaries like Olafur Arnalds or Niels Frahm) can use a vintage Juno vastly more imaginatively than the through-and-through electronic wizards of today. Painful, or at least it should be, as pain might wake one up.

All this, while the instruments we have, emphasis on instruments, can bridge seamlessly centuries and thousands of miles of musical tradition and project us into sound worlds that are in need of imagination. As an astute and finally objective X-Ray of the vintage synth market postulated in Reverb, it may be heading for a downturn… however, same was predicted back in 2014 by others.

It may hurt or even upset to state this absolute and for too many years too obvious fact, but unless there is a paradigm shift and we start to focus on the true capabilities of these astounding instruments, and make truly imaginative music that exploits the vast capabilities, nothing can really change.

Money is money, and laws of supply and demand…

…states that while we are gobbling up echoes of our past, there is zero incentive for true innovation. The R&D effort not spent on innovation (not just synthesis-wise but also in making these newer incredibly complex instruments into more and more usable instruments from musician’s viewpoint) is actively holding progress back in favour of endless regurgitations of golden or not so golden oldies.

Vintage analog has become an automatic qualitative term, and it is driving quantity… to the point where even the big names release some of their resurrected classics in different colours. It just cannot be more evident how things completely lost their way, but while the market gobbles up these “new” products, why spend effort and funds on new R&D?

Now, since the aforementioned Behringer announcement, we are not even gobbling up echoes of our own past. We shall be making and buying others’ past.

The time travel has come full circle, the loop has closed in most postmodern fashion.

This is truly the world of Ubik, but in a way that the late and great Philip K. Dick has never imagined it to affect also our sonic reality.

(Initial version published on Notes from a Nebula)