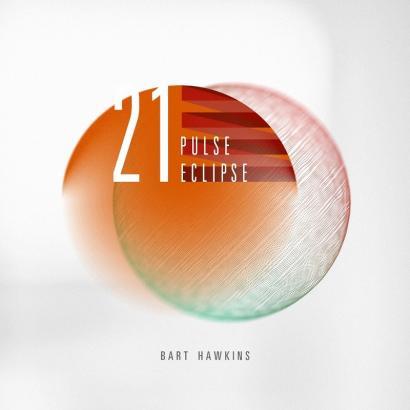 This debut album 21 Pulse Eclipse by Bart Hawkins is best described by the artist himself. “I think what I am musically and sonically creating right now is a meditative process, both in creating it and listening to it. The music I am producing is meant to be experienced with your eyes closed, sitting in the ‘sweet spot’ between your speakers or with your headphones on, with no distractions. This is active listening, meant to engage your mind’s ability to visualize what you are hearing and using your imagination to create your own listening experience. It’s art for your ears and inner eyes.”

21 Pulse Eclipse is the…

…debut album of Spotted Peccary Music composer Bart Hawkins, electronic music made using modular synthesizers and spiced with some field recordings from the composer’s world travel adventures. With the modular synthesizer there is an option to create sounds entirely without the use of a keyboard, and Bart has chosen that path. What you will hear is the meditative sound of electrical energy, textures and sustained or gently sequenced layers of tones, with little hints of field recordings deep in the mix, such as a distant marketplace, or the sounds of birds and human voices speaking languages foreign to my ears.

This collection of 8 tracks is in the Berlin School of traditional Electronic Music, and here it is made with no words anywhere on this album, besides those written in the liner notes and otherwise on the cover packaging, of course. Sequencers are most often used in Electronic Dance Music; however, this is entirely a meditative approach. Working with a modular synth, there is much to know about the science behind electricity — waveforms, voltage control, modulation, envelopes, filters, etc…

There is always a journey…

…to this process, and such sound sculpting will take the listener (and the composer) into uncharted places that might be thought of like rabbit holes or falling through looking glasses, leading to the discovery of new musical ideas that previously did not exist. There are plenty of ‘happy mistakes’ to be uncovered and collected when going down such unpredictable rabbit holes. Combining these newly discovered or invented elements together in the mix, the songs come to life. A composer working with modular synthesizers first creates the elements of the sounds, like a painter that makes her or his own paint. Then these elements are arranged and somehow come together in new ways, taking on forms that eventually emerge as complete compositions.

I had the opportunity to discuss 21 Pulse Eclipse with Bart, and he had some interesting things to say. “This whole album is about energy and my exploratory world into modular synthesis. I do like to think that the modular synthesizer is like a control panel at a Tesla lab and its operator is the mad scientist, creating new and exciting sonic experiences out of harsh electronic sound waves. The title track, 21 Pulse Eclipse, is based on the fundamentals of energy currents. I wanted to capture the powerful, raw, undulating currents that create the life and breath of electronic music. I wanted to learn from and know these currents as I would know a human being. To listen to each voice, to know their own unique life cycles as they come into being one moment and dissolve into the next.”

After many years working…

…professionally as an electronic media artist primarily in visual realms with cameras, Bart’s current phase of his artistic odyssey has led to his recent emergence as a sound composer. He began in the early 80’s when his practice of Zen Meditation and love of the Berlin School style of electronic music drew him into a world of musical landscapes. Landscapes full of sonic textures, and silence, sparking a spiritual awakening into the power of sound. He has been a professional film & video producer and cinematographer but all of that was predicted by a deeper background in the fine arts. He started off as a sculptor, working with metal. You can hear the sounds of electrified metal all throughout the album.

The album opens with “Dream Meditation Part 1” (12:20) the sound fades in, glowing and sparking, emerging layers take form, I can hear birds and strange machines in there. And the process continues, growing, taking new forms from the ether. This must be what it feels like to be canoeing out of an inky dark cave into the dreamy dim jungle on a dark river, continuing on and on through the strange wilderness until the sound fades out.

The second track is the title cut “21 Pulse Eclipse” (17:13), with powerful electronic buzzing energy. Increasing ringing sounds emerge. I hear metal resonating and fluttering, I imagine machines because of the sounds of the sequencer, intricate patterns and throbbing layers, an electric motor, power sweeping overhead and all that progresses continues along to a more organic cicada sound, towards the last part and then it fades.

Bart provides some deeper insight: “The title track was composed on August 21, 2017 during the full solar eclipse in Oregon. I wanted to sit down in front of the modular synth the day of the eclipse to, as I would like to think, pull down the energy of that special astrological event and let it evolve through the modular synth, as the eclipse evolves through its cycle. It’s as if I am just a conduit and the modular synth is just a medium to give this energy a voice.”

Your Breath Is Electric

Humming and buzzing grows into the third track, “Your Breath Is Electric” (07:15), featuring a new approach to the power of electricity. Initially gentle it continues to strengthen and brings fire, there are repeating cycles, rotation and the sound of growing energy. It certainly sounds like electricity, the rotation pattern fits with the breath in and out, rising and falling. Towards the end I hear crickets or night frogs breathing in the cool wet darkness.

There is a combination of textures heard on “Torus Energy Currents” (04:48), fading in, buzzing power, a bit busier than the track “Energy Currents.” A “torus” is ring shaped and represents how a circle in three-dimensional space would rotate about an axis coplanar with the circle, I think it looks like a donut or inner tube for a motor vehicle’s tire. This track has an intermittent percussive marching machine pattern in the layers of the later half.

A more sparkling feeling of motion is heard on the track “Bell Curve Blips” (06:40), gentle layers of glowing rising ringing repeating patterns with some transient beeps folding past doppler style, the blips emerge from the glowing throbbing base of the construction.

Traditional Electronic Music is usually a serious undertaking. “Crazy 8 Frobogs Throuping Through The Seven Forests” (08:28) changes all that. This is what makes the arts so interesting, breaking with its own traditions. I hear in the continuing electronic sounds maybe some new creatures in a soup of glowing light, buzzing electronic energy, in places like cartoon voices, chattering to each other. They are followed by yet more voices that are fragmented, glimpsed through the sparkling energy, funny or just strange, and not specific.

The word Frobog sounds to me like a frog in a bog. Throuping sounds like more than one of them traveling together, as in a troup, trouping through, so maybe this is a group of small moist creatures traveling together in a forested place, or maybe it is an entire bog filled with frogs. It is possible the frobog has nothing to do with frogs or bogs, but they sound to me like they are creatures moving in some kind of terrain.

So, what is a Frobog? There is only one way to find out: asking the artist himself. “The word “Frobog” came to me while I was creating the music. Frobogs are mischievous little creatures who inhabit a planet much like Earth. Like a cross between a Fairy and a Troll, Frobogs act like a small wind gust creating a bit of momentary chaos without doing harm. On this imaginary planet there are 7 different magical forests that mimic the 7 energy centers of a human body and the Frobogs play an important part by playfully skipping and chasing each other creating much needed chaos in such a pristine and peaceful place. We all need some crazy Frobogs in our lives, to shake things up a bit.”

The album closes with “Dream Meditation Part 2” (08:16) forming what might be taken as bookends with the first track, rippling power, infinite glowing energy morphing slowly along. From the artist: “I even pulled audio off of my old video tape of a Tibetan dance I recorded when I traveled to India in 1994. I recorded sounds of a small local music festival, so that I could weave it into the tracks, “Dream Meditation” Parts 1 and 2. Also, I wanted to embrace not only electrical energy from the modular, but also electrical energy found in nature and elsewhere. I believe this gives 21 Pulse Eclipse more of an organic experience.”

Now we are left to reflect on what just happened, and to synthesize the thoughts of the artist with my own observations. 21 Pulse Eclipse is all about the sounds of electricity and energy, lingering in the mind. When certain tones and sounds are combined, they can produce harmonic or inharmonic values. This becomes the core of creating tension and release within all music. With the right combination of sounds, you can levitate the human experience to a very high level or down to its lowest depth in the unconscious mind. Sound can transform, not only mental states of being but can transform physical states as well. Also, sound can physically heal cells in the body and also destroy cells. Sound can levitate objects, create geometrical patterns (cymatics), travel between universes, can be expressed in mathematical and astronomical equations. Finally, sound can be personal and universal at the same time.