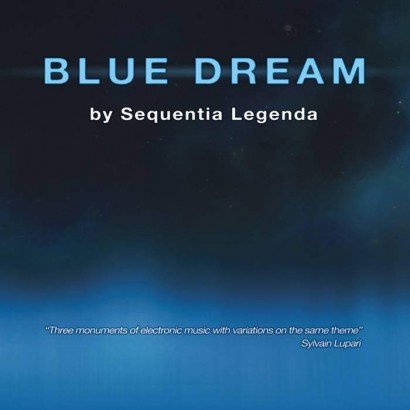 Three monuments of EM with variations on the same theme, “Blue Dream” is to the 2010’s what “Mirage” of Klaus Schulze was in the 1970’s.

Finally! Nearly two months after the release of the E.P. “Fly Over Me”, Sequentia Legenda presents his very first album entitled “Blue Dream”. A wait which was worth it, friends and fans of an EM decorated with these repetitive loops of rhythms, because Sequentia Legenda surfs on the beginnings of his wonderful E.P. which gave me back this taste to plunge myself back into the unconditional charms of this kind of minimalist New Berlin School, such as proposed by Klaus Schulze with his timeless Mirage. And if we have adored “Fly Over Me” we are going to devour its crumbs. As for me, I’m in a conflict of passion. I had simply fall for this beautiful E.P., and yet I have downright felt again under the so many charms of “Blue Dream”.

A long metallic whoosh sweeps the horizons, freeing particles of prism which sparkle in a rush of whoosh and of whiish among which synth lines and synth waves criss-cross their sibylline perfumes. The first bass pulsations are wriggling in the background, bickering with metallic jingles which clink in this mesmerizing fusion of those multiple aromatic lines of “The Approach”. Sequentia Legenda spreads gradually his minimalist structure. The rhythm skips and pounds with a light gap between its parallel lines, creating a fascinating troop of jumping keys which harmonize their cabrioles under the subtle gradations of synth lines, both in colors and tones.

Very familiar with the essences of “Fly Over Me”, the structure of “The Approach” is however more lively and more fluid. This is the minimalist art in its most musical shape here. The electronic percussions, which always remain very present, redirect the swiftness and the shape of the rhythm a little after the 9th minute, producing the plans of a subtle crescendo. Their strikes and their rollings put in the background this rhythm embroidered around jerks of sequences, but also accentuate these pads of voices which, unified with other pads to the iridescent brilliances and other pads wrapped of cosmic mist, spread a delicious perfume of hypnosis. This is as much beautiful as “Fly Over Me”, even if quite similar. With a clear propensity for the approaches of those movements of crystal clear and minimalist sequences from Klaus Schulze in Mirage, it’s just obvious that Sequentia Legenda would eventually by encroach with more accuracy in the paths of the great master. We remember these delicate arpeggios which rang at Crystal Lake’s opening? We remember this second draft of Mirage in Big in Japan?

The introduction of “Vibrations” plunges us right in the heart of these two universes. We could downright speak about plagiarism if the track didn’t sneak between both variations of “Fly Over Me” and “The Approach”. The execution is the same, only the ambiences differ. Here the synth pads always caress so warmly this delicate electronic staccato which amplifies its measure with as much subtlety as delicacy, whilst electronic chirpings of the beautiful Schulze’s analog years come to peck at our ears and to awake soft memories of a time that will always stay in the firmament of the unconditional charms of EM. The proof? This wonderful obsession which surrounds the Sequentia Legenda phenomenon who, with an approach so candid, manages to put between our ears a thing for which we would never have hoped.

Three monuments of EM with variations on the same theme, “Blue Dream” is to the 2010’s what Mirage was in the 1970’s. If several people are going to talk about plagiarism, me I see an audacious extension of the work from Schulze here, in the same way that Redshift, Node, Arc and so many other artists have doing it for the music of Tangerine Dream. It’s obvious that these crystal clear sequences which sparkle, skip and crisscross in order to unwind an ambitious minimalist pattern is an object of passion for all those who worship this musical genre. But beyond this similarity with the work of Klaus Schulze, Sequentia Legenda raises himself as in a very good architect of his structures by decorating them with thousand subtleties which invade ears with a merciless taste to start again after each listening. It’s intrusive and subjugating. And, there is no harm done to indulge ourselves. So have fun, because this “Blue Dream” will obsess you relentlessly. This is more than good. And I’m pretty sure that it will be on the top of my list of the best albums of 2015.