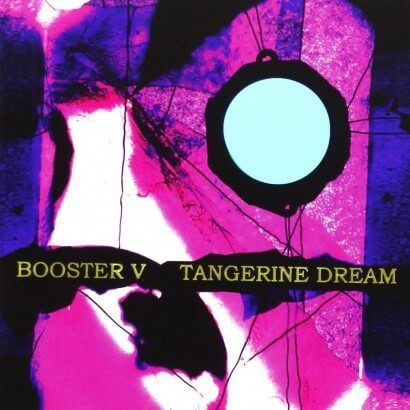 You missed albums such as The Island of the Fay, The Angel of the West Window and Finnegans Wake? Well here is a beautiful opportunity to buy back this mistake. Because not to possess one of these albums deprives you of all rights of bitching against the recent artistic motivations of Tangerine Dream. But beyond this very partisan entrance on the subject, “Booster V” is not a best of the Sonic Poem Series, but it is a great way of tasting the last works of the Dream which are getting more and more interesting. Besides the 9 titles of the Sonic Poem Series, “Booster V” offers the most beautiful title of Zeitgeist (Rubycon 2010), two from Mona da Vinci (“Morpheus’ Light” and “Calumet”), two from The Endless Season (“Escape” and “Wild Ocean of Blue Fate”), as well as two remixes and 4 new compositions among which 2 which are particularly very interesting.

“Calymba Caly (Figaro’s Fine Cut)” starts this new Booster with a remix of one of the most estimated titles from the 80-81 tour. If the rhythmic structure is intact the harmonious envelope misses a little of vitamin. Without being a musician, it seems to me that I would have made something more incisive in studio. It’s good, but no more than that! “Beauty of Magic Antagonism” is the first one of both The Island of the Fay’s titles, the other one being “Fay Bewitching the Moon”. If I fully agree with this last title, which is a pure jewel of the Dream crown, I am a little less for “Beauty of Magic Antagonism”, which is a beautiful ballad. I would rather have opted for Marmontel Riding on a Clef or Darkness Veiling the Night, but I’m just a fan…

“Rubycon 2010” and “The Silver Boots of Bartlett Green” (What a track!) are in their places on this compilation. They precede the first two novelties on “Booster V” ; “Shining Ray” and “Twilight Dance”. I like “Shining Ray” which espouses quite well the rhythms and ambiences of the Sonic Poem Series, while the psychotic rhythm and the celestial harmonies of “Twilight Dance” leave me cold and this in spite of the heavy pulsatory rhythm and the lines of sequences which crisscross in a spiral dance. Afterward it’s the round of hits with “Morpheus’ Light”, “Escape”, the very beautiful “The Invisible Seal of the Holy Tribe” which, with the striking “The Silver Boots of Bartlett Green”, “Hoël Dhat the Alchemist” and “The Mysterious Gift of Mankind” comfort marvellously our need to re-hear The Angel of the West Window. “Hermaphrodite”, “Resurrection by the Spirit” and “Mother of all Sources” are also great titles which represent quite well Finnegans Wake. Only The Sensational Fall of the Master Builder is missing. One of the key elements of “Booster V” is the way that the titles are placed and follow each other. Edgar diversifies the rhythms and the softer moods, adding to the fluidity of the harmonies which cover the works of the Dream since the end of the Virgin years.

At this level I think of “Hoël Dhat the Alchemist” and “Mother of all Sources”, two title which without having the same rhythmic structure offer harmonies which juxtapose with an immense melancholic approach. “Sailing through the Night” is a novelty which brings nothing very new to Tangerine Dreamrepertoire. The voices of plastic remind me the very cold universe of Winter in Hiroshima, but the solo of guitar is good and very driller of souls. “Booster Battery” is the last newness of the Froese/Quaeschning duet, and it’s rather good. The rhythm is slow and progresses with sequences à la Flashpoint which crisscross on the fly beneath the slow singings of a lyrical synth before landing on a heavier tempo fed by weighty percussions. “View from a Distant Star (Milky Way Mix)” was an unreleased track which appeared on the live album from the Moogfest held in North Carolina; Knights of Asheville. It’s a soft electronic ballad which finds its beauty in its orchestral arrangements of which the slow strata are all in contrast with the rhythm of percussions. After a light title taken out of The Endless Season (“Wild Ocean of Blue Fate”, me I would have preferred Devotion or The Seven Barriers), “Fay Bewitching the Moon” concretizes the magnificent musical year that Tangerine Dream offered to his fans in 2011.

I’m a fan and I’m also an honest one! When it’s not good I say it and when it’s good I say it loud and clear. Sometimes I’m carried away because Edgar always knows how to light on, as to put out, my passion towards his works. And it’s this passion which urges me to say to you that “Booster V” is an essential in the universe of excessive multiplicity that is the production of Tangerine Dream compilations. Not that the offered novelties are incredible, that not. But rather because of the origin of albums aimed by this compilation. The 2011 year in the EM planet belongs to Tangerine Dream. Albums such as The Island of the Fay, The Angel of the West Window and Finnegans Wake are inescapable works where the rhythms, melodies and ambiences espouse marvellously the premise of their inspirations. If “Booster V” is not a compilation of this series, it looks like it. That also gives you the chance to obtain the best of the CupDisc, exception made of The Gate of Saturn and its boiling Vernal Rapture, released during the same period as well as some unpublished titles which add to the necessity of obtaining Booster V.