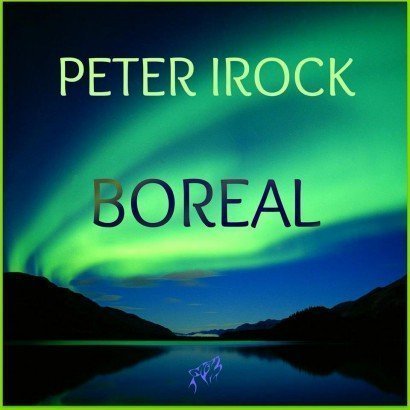 In 2010 Peter Irock released the album ‘The Return’, on which he presented his electronic arrangements of the music of Mr. Fiamm, a musician from Locarno. In 2013 he recorded the album ‘The Schaffhausen Boat’, presented at Schaffhausen. Peter Irock has collaborated with musicians and recording studios, in particular in Ticino, as a composer and arranger. He created music ‘on demand’ for numerous events, thanks to his skills and extensive knowledge of his instruments.

And now we have BOREAL, his third album which he released in September 2014.

BOREAL starts off with flowing pads and an underlying bass drone. It’s easy to float away on these fields of sounds. Then a sweet and smooth synth melody enters and takes me by my hand. I like this. Suddenly this melody gets support from a short pulsating sequencer loop that repeatedly comes, drifts away and comes back again. The percussion starts in and then we have a very well-orchestrated harmonic track. A female voice draws the attention and she sings her aria along with flute-like sounds, supported by the pulsating sequencer. Then we slide into a short transition full of layers of pad sounds. We arrive at a new part by getting attracted by a guitar and an Asian-like female singing voice. She lures me into a well-composed and beautiful part of BOREAL. This part reminds me of the music of Tangerine Dream, one of the bands by which Peter got influenced. BOREAL is a very good track on which you can float away from daily life very easily.

The Saurus opens with a desert ambient-like intro, known from the music of Steve Roach. Whispering voices are trying to get my attention. I’m getting curious. After a short while a heavenly sounding sequencer starts in. Its sweet melody melts together with accompanying sequences and percussion. It’s like I’m getting pulled into a magical world. This track soothes my mind. This second track of BOREAL reminds me of Tangerine Dream too, but in the first part to a lesser extent than in the latter. I hear a more personal touch of Peter here. Peter’s skills as composer and performer are very obvious. The Saurus is more uplifting in this part than BOREAL in my opinion. The track’s third and last part is very smooth and full of soft sounds; I like the flute-like synth in particular. Nice track!

Speed Sequence begins with various sound effects, including a trumpet-like synth that paves the way for a choir and a female voice snippet. This complex opening is absolutely beautiful and impressive. All the elements blend very well together. Then a male voice starts counting down. What follows then is a superb melting together of percussion, voice snippets, sequencers and melody. Fast and furious, bombastic even. Fabulous! This part could have been a film score.  All of a sudden everything collapses. A kind of screaming voice emerges, along with various effects. I’m being led through a world of surprising images and colors. After a while a fat sounding sequencer emerges and things are speeding up again. Wonderful. Massive percussion loops are supporting the sequencers and they are pulling me into a sonic adventure. A great solo accompanies the track final to its very last second. What a track! Peter Irock is a true master in combining various moods into an amazingly good sonic spectacle! Everything fits very well together.

Orion333 starts off with eerie sound effects mixed with vocal snippets of whispering children and a whispering female voice. A hypnotic sequencer starts in and gets accompanied by a flute sound. The underlying pads provide a dreamy ambient mood. A rapid kick drum starts off and together with the synth strings an attractive mood is getting established. I hear some Tangerine Dream here. Orion333 sounds mystical and makes me feels like I’m in a fairytale. Percussion and sequencers along with various melody-lines are alternating and keep this track very vividly. The female voice starts to sing her enticing aria again; she is leading me to the end of my journey. This is really very good!

BOREAL is a beautiful album. It’s filled with four very good tracks that are highly accessible. Although I can hear Tangerine Dream every now and then very clearly, I have to say that Peter Irock has his own personal touch to his compositions. The four compositions do never sound boring, they are a fine mixture of various moods. BOREA is a strong album when you want to withdraw from daily life for a bit. It provides a sonic adventure that after its last notes have sounded, will leave you behind with just one deep desire: another ride!

BOREAL is available as digital album on Bandcamp.