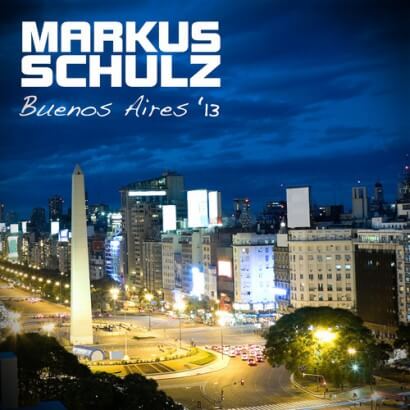 It’s that time of year again when Markus Schulz releases his newest compilation in his city series and the 2013 version is dedicated to Buenos Aires, the capital city of Argentina. The two CD set Buenos Aires ’13 features 38 songs, will be released on October 4, 2013 and you’ll likely be in a loop of listening to over and over. We live in a world full of throwaway music that is often listened to a couple of times and often forgotten but the tracks picked for this mix will have the staying power. The two discs of Buenos Aires ’13 do exactly what a dance music compilation should do, take you on a ride. There’s two vocal tracks on the mix, one of those being “Nothing Without Me” and the voice of Ana Diaz has never sounded better in this shadows of Coldharbour remix by Markus.

The first CD of Buenos Aires ’13 opens with “Momento de Gloria” by Marscela and there’s no time wasted as “We Evolve” by Sequ3l starts with a steady beat and builds into a melody that sets the tone for the rest of the way. The drum roll into the melodies of “Sin City” by Sensetive5 has the elements of a track that could be played at any time during a set. Crystal Design’s “Scarface” is has a smooth rolling beat followed perfectly by Rodg & Ruben de Ronde’s “Remain Different” that will likely be a regular in many sets with its big room sound. Tucandeo’s “To an End” has a dark progressive sound with an added piano element that takes us right into KhoMha’s “Cyclone” that has been a hit in sets all summer. The snare drum build up of Rex Mundi’s “Aureolo” carries over into “Progressive Dreams” by Ruffault that plays out as one of the longer tracks at almost five minutes. Grube & Hovsepian take some time in “Palermo” to just let the piano do the talking without the need for any type of drum underneath it. Danilo Ercole’s “Point of View” builds up into a breakdown that should make you start dancing. Markus makes his first appearance on the mix as he presents a new Dakota track titled “Barracas”. Wellenrausch & Basil O’Glue collaboration on “Wickaninnish” is a track that I can imagine listening to late at night in a set and before you know it you’ll be singing along with Ana Diaz. The Shadows of Coldharbour remix by Markus of “Nothing Without Me” gives the track a fresh new progressive sound. The newest member of the Schulz Music Group, M.I.K.E. (also known as Push), takes us out of stalker mode with the upbeat “Before Dawn”. The next track of this first CD of Buenos Aires ’13, “Remember This”, hits the point of putting your arms in the air to the memorable melody that has been a staple in sets for Markus Schulz throughout the summer of 2013. The last three tracks by Mr. Pit, Aaron Camz and Rex Mundi close out the first CD with tracks that will be timeless for years to come.

The second CD of Buenos Aires ’13 wastes no time starting off with Protoculture’s “Talisman” and builds into “Towards the Sun” by Markus Schulz and Rex Mundi which is the second of two vocal tracks on the two CDs. The vocals are effective while being simple with only seven different words letting you know to keep on walking, keep on moving and to walk towards the sun. KhoMha’s “Dimensional” has more piano than we’ve been used to in his productions and you almost wouldn’t be able to identify it as one his own except for two minor breaks with his signature kick drum sound. The build and progression of “Stratosphere” by Digital X gives the track a quality where it could be played at any time of the night. “Praia da Adraga” by Purple Stories appears to be named after a beach in Portugal and the track has the melodies to make you want to be on a beach. As you think about a beach get up and head towards the club for Danilo Ercole’s “Freezing Rain” which takes you into ”The Battle” by Fisherman & Hawkins vs. Nifra, a peak time track that can be imagined playing on any festival stage. The same can be said about “Fair Winds” by Elevation vs. Grube & Hovsepian. Vassilakis & Tarr’s “Galea” slows things down just a little bit away from the big room sound before the massive “Trickster” takes control to lead into the second half of the CD. Basil O’Glue’s “Gilgamesh” and “Scrambled” by Solid Stone keep the pace moving leading into “Mardi Gras” by Markus Schulz, a track that was only known as an ID early in 2013. “Royal Flush” by Harry Square has an excellent build that’ll have you running on the dance floor. “Phantom” by Digital X and “The Other Side” by Skytech are two familiar tunes if you’re a diehard listening to live sets and they’re familiar in a good way as they are great tracks. Elevation’s “Stadium Control” could’ve gone anywhere in the mix but is fitting towards the end leading into the Markus Schulz Coldharbour remix of the classic Solarstone track “Solarcoaster”. The track is trance perfection and leads into “Viaje Completo” by Marscela who had also been given intro duty for the first disc of this Buenos Aires ’13.

The city series is out later in the year than usual but Markus Schulz delivers another memorable compilation that should please fans of years gone by to anyone just discovering Markus. Whether you want some music to listen to at work, in the car, before going out or for the after party, Buenos Aires ’13 can fit well in any scenario.