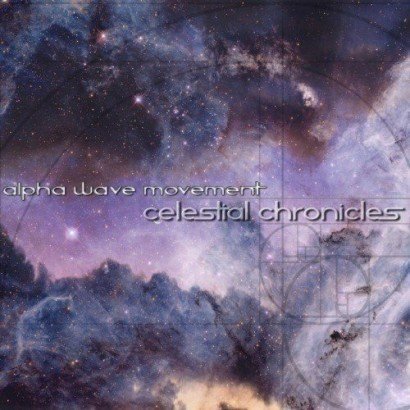 Celestial Chronicles is another great album from Alpha Wave Movement, a musical project from Gregory Kyryluk who frankly deserves one day to be known to his true value.

Hollow winds awaken an organic fauna as well as some delicate tom-toms which pound on the discreet circular rhythm of Ancestral Star Chart. Lonely chords are roaming there. They form a shy melody which dances in dense and morphic cosmic veils while other chords hammered in a false xylophone decorate an ambient rhythm which coils up comfortably in the hollow of the ear. Wrapped up in an intense sonic dryad and embroidered into structures of rhythms of which the discretion feed the ambiguities and where we just cannot ignore Steve Roach’s influences, Ancestral Star Chart breathes all the contrasts of an EM which tries as much to seduce than to introduce a musical quest out of the ordinary. Discreet rhythms, but always very present, in ambiences sculptured in the esotericism are the privilege of Alpha Wave Movement’s last work. Celestial Chronicles inhales all the serenity of its name. Behind every piece of music, of which the last seconds leave an imprint of amazement, Gregory Kyryluk weaves ambient rhythms which are submerged by an intense cosmic painting where the stars burst of their twinkling singings, spreading musical tears which melt themselves into spiritual approaches to make cry the winds. And Ancestral Star Chart is a soft introduction to this fragility of the contrasts which lie down on an impressive pallet of musical landscapes where the eclecticism and the esotericism sing on the same harmonies.

The discovery of this other pleasant surprise of Alpha Wave Movement, Celestial Chronicles, continues with the very ethereal intro of When We Roamed the Stars. There where cries a very musical synth within a symphony of stars dusts. A rhythm arises from this sonic abundance under a shape of a spiral of which the ascending curves tie up their jumping keys to some sober percussion. The metronomic beatings, soft as harmonious pulsations, accelerate a rhythmic which always remains a prisoner of a dense electronic pattern where the tears of synths abound in the iridescent mists and those fragments of stars and their twinkling dawn serenades. The winds of Orion smother the final, like they blow on the very ambiospherical introduction of The Tender Sea of Space. The ambient music expires the melancholic sighs of Vangelis in his futuristic visions while that the soft movement of sequences reminds the one that Richard Pinhas exploited in his wonderful East/West (Ruitor). The fusion of these two genres in this interstellar sonic palette irradiated by thousand tones is rather crunchy. Radiosonic Temple of Harmonic Sound is the most impressive and lively track of Celestial Chronicles. And yet, its slow contemplative introduction, where the sitar and the Steiner EVI of Mark Steiner tune their sound prayers, calls up to the meditation. Sinuous synth curves draw the intriguing drones which liven up a superb hypnotic rhythm where our ears have difficulty in kissing all the subtleties of sequences and percussions. The rhythm is clinic, with Middle East fragrances, and embraces a kind of soft ambient down-tempo with a structure which hiccups smoothly in the Arabian breezes of the Steiner Electronic Valve Instrument. It’s very good and the ear hooks on the very first listening.

Genesis of a Super Nova offers a somber lunar lullaby with a fine movement of sequences on Celestial Chronicles, of which the ritornello of the chords from a kind of cosmic harp floats in astral choruses, rivers of harmonious prisms and in breezes of ether. Still there, it’s very beautiful, magnetizing. I would say even very striking with those slow floating synth layers which cry and kiss these muffled knockings which divide carefully the morphic rhythms from the cosmic moods of Celestial Chronicles. How beautiful it is! Stellar Mantra is closer of the Hindus divinities with a slow rhythm, very transic, where the sitar scatters its weeping notes on the back of fine tribal percussions of which the delicate tom-toms calm our torments as much as the fascinating monasterial choir. And as for each of the tracks on Celestial Chronicles, the rhythm evolves with a subtle velocity in the pace without ever overflow beyond its hypnotic Mantric shroud. Final Transmission is the last connection between cosmos and our spirit of Celestial Chronicles. It’s a track which is as much ambient than somber. And it is very dark with its long movements of drones which cross a very abstract soundscape where prisms shine and gradually form a chain of rhythm of which the keys hop and hiccup finely in thick synth clouds and their electronic radio activities to be cut out to the chisel. Fine arpeggios emerge from nowhere, so decorating a finale which reminds fortunately that we can take back our lost senses in the floating harmonies of Ancestral Star Chart.

The more I dig into Gregory Kyryluk’s universe, the more I discover an artist among whom the value and the talent remain still too much underestimated in the very big sphere of EM. A little as Steve Roach, Robert Rich and Jeffrey Koepper, the American synthesist does his small affair without making too much noise. Remaining very discreet in his native Massachusetts, he has created his own label (Harmonic Resonances) and produces a delicious EM which passes too often under the radar. I just hope that Celestial Chronicles doesn’t undergo the same path. As beautiful as good, Celestial Chronicles is an album to be discovered. Moreover if there is an artist whom you should discover in 2014, I strongly recommend Alpha Wave Movement.