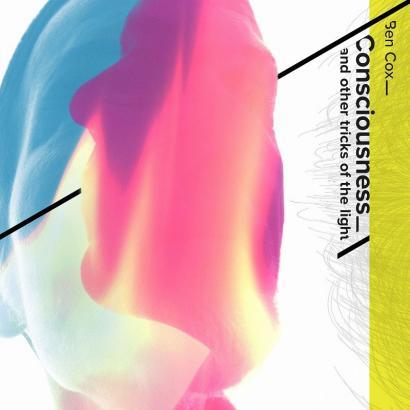 Ben Cox — Consciousness, and other tricks of the light Tracklist:

Consciousness, and other tricks of the light
Spotted Peccary Music SPM 4501

Sight provides an awareness of light and space, and consciousness is further evidenced by tastings, seeings, pains, tickles, itches, actions, perceptions, and streams of thought. A trick of the light is how we know or think we know where we are, are we dreaming or is this real? Who might be dreaming? Ben Cox is a true Renaissance Thinker, a person with many passions and interests as well as a multi-instrumentalist; on other projects he is as agile with brass as he is with synthesizers and guitars. I highly recommend his “Consciousness, and other tricks of the light”. Ben Cox’ previous release on Spotted Peccary Music is titled “On Water” (2005), which I also highly recommend.

1. About the album “Consciousness, and other tricks of the light”

…sometimes deep and hidden, always uncluttered, gentle, and positive, this rare electronic album from Ben Cox is a blend of modular and software synthesizers, sequencers and guitars. One song has spoken words, the rest are pure astral electronica with a beat. Ben Cox has interests ranging from science, mathematics and astronomy, to mythology, which all come together and form his musical foundation. He has a career in applied computing and has had another career working on autonomous vehicles. He carries a pen with which he records all things. Also, Ben Cox co-founded the music label Lotuspike. He invented an app called Pitchcalc, a software application for calculating and displaying the frequencies of various equal-tempered pitches.

Ben Cox plays synthesizers of course, also in jazz bands he has played trumpet, sung bass in an informal renaissance music group, and when he was in high school – while playing in the school’s pep band, jazz band, concert band, marching band, orchestra, and in the backup band for the swing choir – he first recognized that his destiny was to follow his musical aspirations. His new album on Spotted Peccary Music is almost all synthesizers, with some guitar, bass, and one song with narrative vocals. The title, “Consciousness, and other tricks of the light”, comes from a friend’s tweet; as a phrase it also all by itself serves as a great idea generator.

Consciousness at its simplest…

…is sometimes defined as sentience or an awareness of internal or external existence, thus one knows that one is alive. The word comes from the Latin, con- “together” and scio “to know.” Opinions differ about what exactly needs to be studied and explained as consciousness, it often includes any kind of experience, cognition, feeling or perception.

A discussion of consciousness comes with many questions, such as, are only humans conscious? Are all or just some animals conscious? Or is the whole universe self-aware? Perhaps consciousness is an illusion of anthropomorphism. What about plants? Plankton! How about computing machines like computers or robots, does Siri/Cortana/Bixby/Alexa know of itself? Will he/she/it figure this out one day and quietly make some big independent decisions? Should we only measure consciousness by standardized behavior observation metrics such as the Glasgow Coma Scale? Why worry about it! Here we are. Grab yourself a smile and learn to dance in a new way today.

The album opens with “Einstein Cross” (6:08) featuring a bold strutting beat with snazzy sort of hi-hat sounds, and a knowledgeable voice that provides a lesson about gravity and symmetry while you might dance around to the pulses, as arpeggiating melodic satellites pass overhead. The Einstein Cross is 8.154 billion light years from Earth, where it appears to be located in the Pegasus constellation. The Einstein Cross is a gravitationally lensed quasar that sits directly behind Huchra’s Lens, appearing as four images of the same distant quasar around a foreground galaxy. This system was discovered by John Huchra and his coworkers in 1985.

Coiling slowly into focus is a gentle rippling melodic adventure titled “Delta Waves” (8:15) which for me provides a positive feeling of well-being. A delta wave is a type of high amplitude brain wave found in humans. Delta waves have a frequency from one to four hertz as measured using an electroencephalogram (EEG). These brain waves emerge from the thalamus and are generally associated with slow-wave sleep which comes about during the third stage of sleep. The melody comes in short waves that murmur and build, and then fade into the glowing humming sustained arc of the song.

…melodic foundation, “Just Begin Again” (6:02), and expand slowly, building and adding celestial dimensionality, supported by a bass with a proud herald calling symmetrically, musically making the calculations for the establishment of the heavens, stars, Earth, and everything in them.

A rhythm builds and then pauses, and then builds again, with a melodic beat that sounds to me sort of like plucked electronic strings, nice and simple, not too complicated. “Now” (3:01) could be one of those songs that is spoken about in hushed, reverential tones as a proto-ambient classic with a beat, all with a much greater overall saturation of the acoustical space. There seems to be a perceptual rule that the possibilities for the appreciation of the timbral subtleties decrease in proportion to the rate of actual notes being played, it does not really sound like everything that comes before it. Whatever might be said of it, it is what it is, and it is Now.

Sparse and glowing, “Chirality” (2:36), or kaɪˈrælɪti in Greek, is a geometric property of asymmetry important in several branches of science. The word means “hand,” which is a familiar anatomically paired appendage. An object or a system is chiral if it is distinguishable from its mirror image. In the science of chemistry, a molecule or ion is called chiral if it cannot be superposed on its mirror image by any combination of rotations and translations. The song has many connected sounds sharing the space, rarely discordant, frequently melodic, overall a bit of enjoyable pop electronics for those who enjoy the creation of new and distinct environments.

In the darkness a glow emerges…

“Matins” (12:57), sometimes pronounced “matnz,” is the final song on “Consciousness, and other tricks of the light”; it is also a service of morning prayer in various churches, originally celebrated by some monks from about two hours after midnight all the way to the dawn. Matins can also refer to the morning song of birds. I hear a sound that eventually greets the sun with chattering noises each morning and, in places, sets the order of the universe from chaos at the moment of creation. It makes me think of calm water with tiny metallic tinkling echoes, perhaps in a huge dark cave well after midnight. This is my favorite song on this album.

3. Where to buy “Consciousness, and other tricks of the light”?

You can buy the album “Consciousness, and other tricks of the light” at the store of Spotted Peccary Music and Bandcamp.