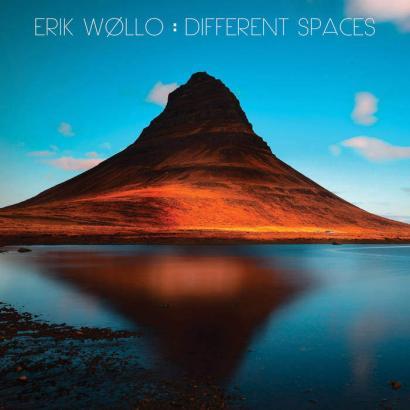 “Different Spaces” is a splendid lyrical opus! The best of Erik Wøllo and so far the best of this year.

…jar of charms, dusts of prism decorate a celestial breeze which is used as bed to a sad seraphic melody which moans with neurasthenic sighs. While our soul drifts towards these inner corridors that we forbid ourselves the entrance, a delicate movement of sequences makes its keys sparkle which shape a spheroidal walking towards a dense storm of cabalistic breezes. “Low Winter Sun (Introduction 1)” is the front door of Erik Wøllo’s wonderful double album which will bolt you to your armchair and in your earphones, so much the lyrical approach of the Scandinavian bard will mark you ears of tenderness and of bewitchment.

As much at ease in the vast soundscapes tied to the magnificence of his Norway than to the sequenced rhythms which invite in astral dances, Erik Wøllo has accustomed us during the last years to realizations which separate both genres while letting drag a delicate link between them. “Different Spaces” is a mixture of both genres which seduce so much, but in an imposing double album which flirts with nearly 2:30 hours and which nevertheless flows like a musical tale of 30 minutes.

“Points in Time” gives a very…

…beautiful overview of what waits for your ears for the next 21 titles on “Different Spaces” to come. The intro is sculpted of dark layers where murmurs, black winds and dark breezes color a soundscape which reaches the dimension of our imagination. These openings, sometimes short or sometimes long, and several times without outcomes, are the departures of structures of rhythms forged on the Berlin School approach, like here, or in ambient phases, like in “Low Winter Sun (Introduction 1)”. Here, the beat gets out of limbos with a line of spasmodic riffs which pierces this wall of rather harmonious winds.

A bass pulsation doesn’t care of these winds, entailing “Points in Time” in a jerky structure which awakens in us, especially with the arrival of harmonious layers and percussions, this feeling to hear a good electronic rock of the Tangerine Dream style. The sound decoration is perfectly balanced, nothing of excess and nothing is lacking, in this electronic rock which is quite a surprise coming from Erik Wøllo. Each title is different and proposes a range of varied rhythms which leaves all the same the necessary space so that Wøllo draws all the splendor of his sound landscapes.

…lively structure braided by a good line of bass and some rather sober percussions of which the metallic jingles buzz as in a birth of Electronica. The melody flows by sequenced oscillating loops which go and come in a choir of seraphic voices. There are titles which are alike in this collection of 22 tracks? Not really! Each has an identity and it’s doubtless the pinnacle, that and this constant rush of emotion which comes as each title passes by, in the universe of “Different Spaces”. “High Plains” offers a delicious Berlin School approach with its stream of sequences which breaks its loops in vapors of ether and in nice layers in tones weaved between the synth and the magical six-string from the Norwegian poet of tones.

I have the feeling to be in a soundtrack of Tangerine Dream here. Another strength of this album is this capacity of his author to enliven his structures of rhythm with constant additions which adorn aptly the numerous minimalist hymns in this Erik Wøllo’s 21th album “Different Spaces”. “Church Mountain” brings us in a landscape of vibes with beautiful ethereal layers which feed the vitality of a structure of rhythm slumbering with its loops which stuff themselves of great percussive effects. The waves which encircle its finale smother another minimalist structure which would have carried us even farther in our reverie. “Similar World” takes over with a steady circular structure and its jerky riffs which roll like a steam train under the acid colors of its burned coal black offerings.

“Past Theme” is another title of…

…atmospheres which are weaved by loops of which the echoes eventually forge a structure of rhythm as much vaporous as the nebulosity of the atmospheres. That reminds me of Peter Seiler, the time of Flying Frames, and Richard Pinhas in the time of L’Éthique. In any event, the flow of the movement is charmingly mesmerizing. “Hydra” comforts our ears with a fascinating rhythmic meshing between sequences, many sequences in contrasting tones and flows, and percussions which skip beneath a sonic sky stuffed by tears of synths and by texture of guitars of which the symbiosis weaves a huge cabalistic canvas.

Between Berlin School and a morphic techno, the music remains as intense than deeply moving with a rhythmic skeleton which loosens its electronic spasms in a fluidity which espouses marvelously the flow of the harmonies stolen from a mourner six-strings. A very good title!

“Kaleidoscope” is unarguably the most…

…beautiful title on the 1st CD of “Different Spaces”. It is entitled Low Winter Sun. The movement is as much magnetizing as the one of a carousel of notes which flutter in a slightly holed spheroidal movement. The guitar is also intense with tears and mislaid dreams which merge with a veil of esoteric airs while the rhythm, always peaceful, shows a swiftness more emotional than the rhythm. Even better than “Hydra”! We speak of intensity? Just as much wonderful and clearly more dramatic, “Evening Island” is going to give you the shivers in the soul with a very striking guitar which slides its tears and its ethereal loops on a hypnotic rhythmic pattern, like in beautiful old Berlin School livened up by a revival in the color of the tones.

Always in sound panoramas of which the reliefs are perfumed by shadows, by sighs and by tears, coming as much the guitar as the synth, Low Winter Sun’s rhythms are parading in different forms, here it’s the spasmodic impulses, and in tints which stick to the sadness and to the temporary nostalgia. Like here, where the loops of guitar shed tears on a structure which, like those huge vertical spirals, are soaring constantly without ever reaching heavens. The regulars of the genre name these structures; Californian School in homage to his sculptor, Steve Roach. “Memory Space” ends the first 75 minutes of “Different Spaces” by a beautiful phase of ambiences where the dark shadows and the sibylline harmonies drag us slowly towards a more translucent phase.

There is some more music in…

…this last Erik Wøllo’s album. “Mystical Sun (Introduction 2)” leads us towards the other side of the Scandinavian panoramas of Wøllo with an approach always so very attractive in rhythms but with more luminosity in the vibes and in the harmonious lines. If “Mystical Sun (Introduction 2)” completes the moods of “Low Winter Sun (Introduction 1)”, they are quite alike, “Chroma” differs from the energetic rock of “Points in Time”. Erik Wøllo flirts with a more Electronica approach, although the repetitive rhythms of the Berlin model remain very omnipresent. The harmonies and the atmospheres are lighter and more cheerful, putting a lot of emphasize on the contrasts of the sound panoramas between both CD. As in the structure of “Motion Blue”, splendid by the way, with its effects of percussions and its motoric approach. Mysterious, “The Morph” collapses under a heavy mood in tints of melting metal.

“Rundreise” is a superb Berlin School which rolls like a bluish steam train. We notice straight out these contrasts! “Circle Dream” is ideal for meditation, just like the very ambient and floating “Afterglow”. After an introduction filled of the hubbubs of a crowd, “Pilgrim Way” brings us where no other title in “Different Spaces” brought us; towards the airs of a magnificent ballad extirpated by a guitar as dreamy as these banks of mist haloed of anonymous voices. A morphic ballad, a wonderful slow dance tempo with images of embraces which fill the eyes. The arrangements and the voices give an incredible depth to this slow ballad of solitary cowboy.

One of the key points, there is…

…a lot, of “Different Spaces”! After this small moment of musing, “Cascade Falls” assails our ears with an electronic rock very attracted by the IDM. A fiery title and sparkling of freshness and just as much amazing in the repertoire of our friend Erik. If we were unable to resist “Pilgrim Way”, we are going to melt in front of the tenderness shown in this sonic pearl which is “Mirror Lake”. There is a dance, like a magic ballet, which flows throughout the 6 minutes of this title with arpeggios glittering on an invisible ice and of which the charms sparkle with a guitar as effective as a Mike Oldfield at his top of his composer skill. Simply magical!

“Elysium” concludes this wonderful 2 CD opus with an approach as supernatural as this dance in “Mirror Lake”. Except that here, Erik Wøllo adds a little of cloudiness, even if the voices fight against this savor, in order to weave this admirable link which will return us to “Low Winter Sun (Introduction 1)”. Yes, my friends…, this is quite an album. The best of Erik Wøllo and the best album of 2017 so far!

You will find this album on the Projekt Bandcamp page here.