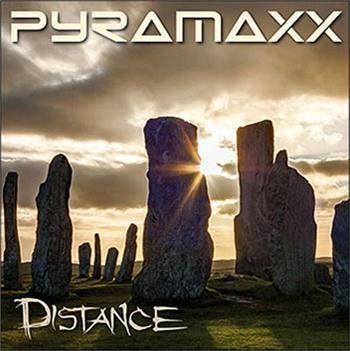 Axess, Maxxess, Pyramid Peak! Whatever your wants and your moods, this “Distance” is a solid album of New E-Rock with a strong claw of Maxxess all over it.

A dark whoosh coming from the abyss opens the first seconds of the first track “Wide Open Range” of “Distance”. Keyboard chords stroll in background there, weaving the strands of a ghost melody which will faint as “Wide Open Range” sells its 11 minutes. A line of sequences invites itself. Its circular movement make clink its keys which skip in an ascending movement, while the waves of synth are painting a sinister atmosphere. It’s the dance of the sequences. Frivolous and undisciplined, they flutter in jerks by tying its fragile ethereal pace onto the strikings of percussions. Gradually the music gets intensified. The rhythm becomes heavy but stays slow. The percussions are equal to a skillful drummer in a progressive rock band. The guitar riffs bury the dance of the sequences of which the delicately spasmodic ballet is dancing lightly in solo in the banks of silvered mist at around the 4th minute. The structure of “Wide Open Range” sees again then its introduction and makes adjustment with another line of bass sequences which gallops with more vigor, trying to avoid the bites of the elytrons of metal from the cymbals. The rhythm becomes then very electronic with these lines of sequences which mix their charms with lines of synth delicately perfumed by psychedelism. But no solos! The percussions become heavier. The riffs get more present. And “Wide Open Range” explodes for a big progressive electronic rock at around the 6th minute. A short moment of fury where the synths swap their effects for guitar riffs and where Max Schiefele takes the lead with loud solos. The chaos becomes harmony with two layers of guitar, one acoustic and the other one electric, where bluesy solos cry over on acoustic notes. Little by little the sequences are taking their rights on a more electronic mood, entailing the finale of “Wide Open Range” towards a lunar electronic setting.

“Distance” goes on with nervous and hopping sequences, cosmic banks of mist, electronic effects on good structures of rhythms sometimes short-lived and sometimes sustained, catchy melodies; “Distance” is not an album of Pyramid Peak and nor an album of Axess. Certainly the name and the approaches are rather similar, in particular at the level of the structures of rhythms, but the synths here are discreet and leave all the room to Max Schiefele’s six-strings, so giving more the illusion than this first opus of Pyramaxx is an album of Maxxess which is solidly supported by a very effective Pyramid Peak but amputated of Uwe Denzer. Max Schiefele (Maxxess) and Axel Stupplich! It’s a long story which goes back up in 2004 with the solo album of Axess (Axel Stupplich), Contact. Since then both friends worked together on many times, Max Schiefele accompanying even Pyramid Peak for several concerts during the last years. It was inevitable that sooner or later this collaboration was going to find its reason on an album. And “Distance” is a good album of EM where the signatures of Pyramid Peak and Axess dilutes their boldness in the shadow of Maxxess and in an album which hides nice pearls. Pearls of tones, of rhythms and of ambiences, with per moments a P.Peak claw, which seem to me to be sacrificed for the benefit of a six-strings very omnipresent for an album of electronic rock. But not for a Maxxess album.

The rhythm slightly technoïd, “Nighttrain” offers a good electronic structure perfumed of the Genesis influences, period Invisible Touch. The keyboard makes fly melodious chords and the movement of sequences weave a spiral vertical movement which is mistreat by electronoïd percussions. The approach is interesting until the riffs of guitar shapes again the whole thing into a kind of electronic rock ballad. It’s lively and solidly driving with nice electronic effects and of percussions borrowed to the Jarre repertoire as well as some floating orchestrations. The introduction of “Magellanic Clouds” is charmingly electronic with a line of sequences which unstitches its rhythm in a very lunar decoration. That my friends, it is good Peak with an ambient rhythm knotted in spasms. The percussions knock out these ambiences with a rhythm heavier than the ambient velocity of the sequences. The guitar lives very well here with layers which use perfume of these effects of synth. And as in “Wide Open Range” the rhythm is exploding for short moment, so giving the pretext to bring the six-strings of Maxxess to roar instead of the synths which would be capable of sculpturing here good solos, as audacious than ethereal. Fewer pretexts for the guitar and more synth solos of; the perfect marriage would have been completed. Because this cohabitation is possible as shows it the slow introduction of the title-track and its movement of sequences which hiccup in loops in cosmos and also in these waves of percussions which are rolling like a sea on the edge to overflow. The riffs of the guitar adopt marvelously the threat of the sequences, while its sighs decorate the lunar landscape of the same effects of a synth. This track of “Distance” displays a very good crescendo which the guitar distorts not at all, even with its nice solos. And here, as all over “Distance”, the moods reach a heavy and slow explosion in order to justify the presence of Maxxess within Pyramid Peak.

After the very technoïd rock of “Runaway”, a great driving track by the way, “Thangka” hangs onto our ears with a wonderful and very Pyramid Peak structure. Weaved in nebulous ambiences and eaten away by a movement of sequences worthy of the Peak repertoire, the music evolves all in subtlety with an ambient structure of rhythm which will end with this kind of cosmic ballad innate to the electronic structures of P.P. and of which the heaviness suits very well to the atmospheres. And the guitar is just in the tone by multiplying ambient vampiric loops that we can easily confuse to those of a synth. This is a great track… with its guitar solos! A guitar very presents in “Circle of Enlightenment” whose introduction is weaved in the vestiges of Pink Floyd in Wish You Were Here. The movement of the sequences which wave in the halfway, as well as these throbbing pulsations so dear to the Pyramid Peak repertoire hijack these atmospheres towards a structure where the rhythm always stays in suspension in very beautiful effects of synth before closing the book of “Distance” with another heavy and slow tempo. A slow dance tempo where the six-strings buries little by little this signature of Pyramid Peak. But what solos my friends! Definitely, Max Schiefele is a superb guitarist.

Except that “Distance”, and I am convinced that the fans of Pyramid Peak are going to adore, is not an album of this very good Berlin trio to whom we owe real jewels of EM of style New Berlin School since almost 10 years. It’s a strong album of Pyramaxx-ess where the guitar, so beautiful and so good it is, will never manage to compete with the creativity of the synths from Pyramid Peak. The only dark shadow of this “Distance”!