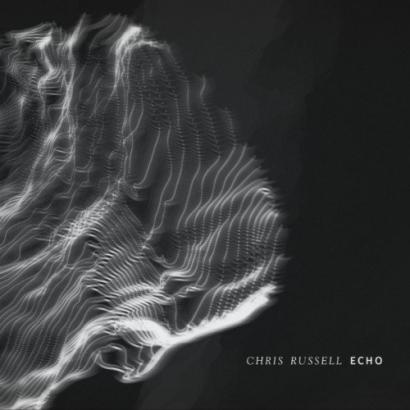 This whole album is like a strange and wonderful journey through a series of caves, hence the name Echo. Overall this is a great listen if you like mysterious textures, only one song has some very sparse repetitive musical percussion, nothing on this album has any insistent instrumental razzle-dazzle. Echo is something to listen to without being pulled away from your chosen thoughts, odd things to hear in your headphones, which is what I am always looking for.

Chris Russell works with various natural (and otherwise) recordings he makes of interesting sounds which he collects and then he processes them for us to enjoy, adding his unique effects and treatments. He has some recordings on the Spotted Peccary Music label and on the Earth Mantra (Relaxed Machinery) label. On Bandcamp there are currently 40 albums that he has created himself, or created in collaboration with other artists, or in some way contributed to compilations, all in the deep listening/atmospheric/cinematic and ambient electronic music genres. He has been doing this for well over ten years.

On this album, Echo, sometimes there are melodic accents, usually there are strange buzzings, whistling things swirling about in the air above, all sorts of unusual but pleasant noises, and always nothing shocking or difficult to listen to or otherwise upset the sleepy neighborhood. There are no beats and no drums, just wide-open magic ear adventures. Imagine a dream where you are travelling with some new friends in a UFO and you are showing them around your planet.

…starts with a low buzz and rumble that roars into mystery, maybe we are in a cave or subterranean parking lot, a really big one. There is a jet passing by overhead, here it comes again, now it sounds like there is in the distance a creaky squeaky train but there is a cosmic sound too. You know what cosmic sounds like, or you will if you listen to this.

“Radium” sounds like rattling and more cosmic of that cosmic thing, almost melodic, like when you rub your wet finger on a crystal bowl. About halfway through an m’bira like sound dances past, but that is followed by the more somber cosmic sound again. It ends in a deep vibrating tone like a ship’s horn, but wait, here comes the m’bira again, dancing to the end.

“Orix” a new sound emerges like an orchestra tuning up, sort of a sustained cosmic buzzing that develops into a weaving of cicadas and night creatures. An Orix is some kind of financial body that has a vision exceeding the here and now.

“Varuna” is the Hindu god of oceans…

…part fish and part land creature, holding a noose and guarding the west. He makes a whistling sound like the wind and has a meditation bell that he dings. He is a subtle presence, so far, I find him to be always welcome. There is a rushing water sound emerging, with the sound of whistling wind. When you get closer the whistling diminishes and you find that you are in a huge cave with a subterranean ocean below you that echoes a bit. The whistling wind sound plays against the rushing water, punctuated by that meditation bell. A pleasant way to spend six minutes and forty seconds.

“Nilium” a new cave, also very big, the biggest one so far but not so busy as the earlier ones we have been visiting during our Echo journey with our new friends in their UFO. Nilium is a cure for odorous water, because this is only sound we have no worries. Do we? Whatever is in this huge cave it is far away, we can hear some echoey buzzing and more cosmic tones, very subtle.

“Sparse” if you like subtle easy melodies this one is what you have been seeking. The sound is a repeating cycle played on what could be a synthetic xylophone, a gentle and simple repeating tune, surrounded by cosmic buzzing and trilling, all very subdued and pleasant. As the easy melody progresses it gets closer and now it seems to have a snare drum in the mixture, with the cosmic glow and whistling things swirling about up there above us. We are still in a big echoey cave but this one has more twinkling colors.

“Odjek” is the Serbo-Croatian noun…

…for reverberation, or echo. This cave seems to have some industrial activity, buzzing and clanking hidden in the darkness. They sound like they are working with metal objects, you can hear them chiming and clattering, sometimes something gets dropped and rolls around a bit. It’s really dark in this cave so the distance is hard to judge but the activity is moderate, probably only a few miles away. Sometimes the clanking diminishes and there are water sounds, probably elsewhere in this cave. The duration of this event is eight minutes and thirty-one seconds.

“Transverter” has a sound like huge wires being energized in a cyclic way, almost a pattern but not quite. A transverter is used in radios to consolidate up and down conversions, but I think this song-like event is more about long distance signaling. So, perhaps in this dark cave there are long wires containing signals and messages suspended somewhere very far above us and there is a breeze making them sigh.

“Abandoned”. This is the end. The fog is lifting and there are strange birds, but it is impossible to see clearly. The dawn is here, and you are alone. There are sounds of life and activity in the distance. Also, the UFO has left you in the subterranean wilderness, but you are still on Earth so there is hope for survival as you make your way towards the light ahead and the new day begins.

You can buy Echo at the store of Spotted Peccary Music and Bandcamp.