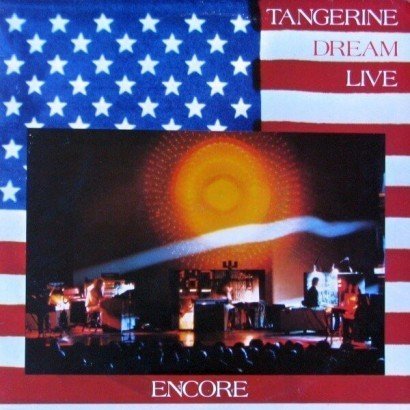 During the 70’s, Tangerine Dream concerts were unique. Because of the delicacy of the analog equipments, the German trio improvised every evening a new show. Certainly, certain lines got closer, but The Mandarin Dream espoused on the spot the main lines of long concerts where the sequential fury supported the ferocity of synths, keyboards and mellotron, as well as the rather rock approach Froese’s guitar. Encore is the archive and the sound witness of this almighty North American tour in 77, of which I was lucky to be in Montreal, which demonstrated that EM was more than an indentifying floating music.

A strange metallic and spectral wind raises sound particles of a lugubrious placid atmosphere. The intro of Cherokee Lane on Encore dives into a syncretic sound universe where lines of old dark organs float and are criss-crossing in a waltz for wandering souls. They are getting lost in the waddling rhythm of a soft sequence, perfumed by soft layers of Baumann’s oniric mellotron. Erratic and staggering, sequencer chords embrace a fine fluty and a warm bass wave, guiding Cherokee Lane towards a violent heavy rhythm, expected quite well and hardly appreciated by an audience which remembers the first sequential heaviness’s of Cherokee Lane. A strong rhythm on a striking bass line, Cherokee Lane lets hear a skilful fusion of previous albums Rubycon and Phaedra. Synths and mellotrons boil on swirling and exhilarating rhythms, freeing furious synth and mellotron solos, harpooned by the sequential tenacity of Franke which strums the movement with violent chords. The synth roars and hems its solos in a perfect symbiosis with the mellotron, while Cherokee Lane becomes more and heavier before quieting very slowly beneath the reflectors of twilights. Monolight begins with a flighty piano which gets astray on airs of Rubycon. A soft piano, a little bit melancholic, joins by a brief passage mellotron before it gets vanished in a hell filled of metallic squeaking and rumblings as well as roaring of terrified synths. We would believe to be in the psychedelic Pink Floyd era on Ummagumma. A light percussion rolling is getting out of there, accompanying keyboard keys and synth breaths which shape a splendid melody. A tender melody which hangs a sigh on the soul and which fades out in these metallic sonorities which collide in a heavy din, the same melody that will be the only single out of Encore and is propel Monolight towards a powerful sequential movement, bitten by a heavy bass and encircled by magnificent howling synth solos. Monolight forks off for a monumental synths trio which sings a superb melody with fat and symphonic solos which move in the sky and fill the air while crossing of Stratosfear. Monolight continues its melodious road towards rumblings of sulfur and ends its fury towards a wonderful piano that musical hells clutch of their synth shadows.

Cold and resonant keys fall as last drops of an icy autumnal rain to open Coldwater Canyon on Encore. Very heavy and psychedelic, Coldwater Canyon is Edgar track title. On a musical structure in constant declension, and which looks like a slow and jerky movement of Stratosfear, Edgar releases his electric madness that leads in a pure improvisation, such as a rock star accompanied by its docile stooges. Twisted solos, bitten by heavy riffs and spiral loops, glance through a movement minimalism which gradually is getting out of breath. It’s a cutting-edge track which distances itself from TD’s repertory, although keyboards pads, sequences and hatched percussions don’t lie about their origins. There are melting in boiling atmospheres as electronic, progressive and heterogeneous. I quite liked it, but I do prefer a more equal sharing between synths and guitars. Desert Dream on Encore encloses this live double album with a long atmospheric track which is stretching in a thick cloud of floating and ambiguous tones. It is the pure electronic magic of analog years that goes into our ears with a very ambient intro with heterogeneous sounds which float in a dreamlike universe. The whole thing ends by a beautiful mixture of electric piano, symphonic synth and foggy mellotron, recalling the steams of Invisible Limits on Stratosfear.

Encore reflects, in a condensed way, the unique magic of Tangerine Dream concerts in this era. Every evening was a different musical happening which delighted the fans. It was pure improvisations on sound effects and surprising laser plays that gave unique moments, engraved in our contemplative memoirs, of which mine.

‹ From Here We Go Sublime