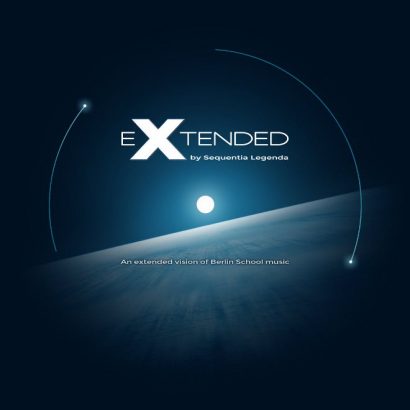 “Extended” is a small jewel of minimalist music where the loops of rhythms and ambiences are parading with as many nuances as subtleties which avoid the many traps of redundancy.

If Laurent Schieber had been the manager of the Beatles, the fame of the famous British quartet would have knocked down the borders of Mars. And there I do not compare the music of Sequentia Legenda to that of The Beatles (oh that not!). But the relentless work of the likeable French synthesist to promote his music on the Internet and the various social networks is a real lesson on the art of marketing. “Extended” is truly a powerful object of advertising as aggressive as a thick cloud of bees on a wedding cake since that Sequentia Legenda has announced that this next album was going to be made in association with P’Cock’s drummer, and other renowned bands, Tommy Betzler. I believe that it was in spring 2016. And maybe even before!

If there is a saying which says that any aggressive advertising can hide rubbish, a thing difficult to sell, it’s definitely not the case of “Extended”. And it’s necessary to take the title for what it is! Either extended versions of 3 titles which have appeared on the albums Blue Dream and Amira, and 3 other tracks that Sequentia Legenda has extended to the maximum with the aim to offer a double album of this subliminal music, which draws its sources from the long hypnotic and repetitive movements of the master Klaus Schulze, to his fans.

After a version prolonged of 7 minutes of “The Approach”, released on the 2015 of the Blue Dream edition, “Into the Sequences” begins its journey between our ears smoothly. A small digression here! Why I don’t write anything more about “The Approach”? That will be the same reason for “Somewhere” and “Vibrations”! The added minutes bring nothing new except that an even deeper implanting in our state of intellectual hypnosis. It’s a track that I also reviewed and which always remains very pleasant to listen to, even in a prolonged version. That extends the pleasure, as would say my Lise! Thus, a distant wave extricates itself from the oblivion in order to float lazily with jingles. We are in familiar territory, because the synth layers and these jingles which peck at them are wearing the seal of Sequentia Legenda.

These layers move hardly, revealing their influences with fine nuances in a movement which remains rather sedentary. But we sense some small loops taking shape at the same time as the percussions sparkle in the background. Little by little, the ambient rhythm of “Into the Sequence” is getting on foot with delicate jumps which stretch their effects like the undulations of a flame shaken by quiet breezes. The movement abounds of voices hidden in these layers while the pace progresses like the march of a penguin in search of its last den. Beautiful and quiet, as all the minimalist EM stemming from this generation, “Into the Sequence” rests in its sedative sequence even with its deceptive effect of velocity.

“Solitudes Lunaires” will have on you the same effect as the magnificent “Fly Over Me”! With these layers which are perfumed of ether and of voices, the introduction does very Klaus Schulze in his Body Love years. And contrary to “Into the Sequence”, the intensity makes feel its presence from the first seconds. Some small steps are travelling through the lunar decoration of this introduction, whereas Laurent Schieber forges the indefatigable loops which are extract from the blue vapors of the layers of ether. Carillons are leading the charge around the 8 minutes, entailing “Solitudes Lunaires” towards its rush of adrenalin with successive beatings and of which the effect of saccade draw a strange cosmic rodeo.

The rhythm gets rid of the Body Love influence in order to stretch its jerky spasms which vivify the percussions of which the strikes will lose of their shininess with an avalanche of voices which comes down at around the 14th minute. It’s the art of the simplified minimalist music that Sequentia Legenda installs with his armada of small sequenced paces which fidget in a spirit of wandering amplified by these stratums of seraphic voices. “Solitudes Lunaires” is split into 4 rather different blocks and these last minutes respect this pinnacle of emotionalism with a movement of steadier rhythm and those effects of synth which compensate for the lack of solos which cements this strange relationship of seduction to the music of Sequentia Legenda.

Composed upon a special request from Edgar Froese’s wife Bianca Acquaye for the memory of her late husband, “Au Revoir” is the most intense title of Laurent Schieber’s repertoire. Introduction weaved in the vapors of ether and of floating voices; the music already shows a high level of intensity with these very pronounced layers of voices and these movements of percussive jingle which shake the sleepy moods of the first 4 minutes. The loops of rhythms, embroidered around electronic percussions, repetitive sequences and synth layers skillfully split, are rolling non-stop with the support of effects of synth crumbled in stroboscopic jerks.

Percussions feed the passion at the same time as those stratums of lyrical voices try to cajole it. It’s this very pronounced contrast between the intensity and the serenity which makes the charm of this title, a little as the long love session that two lovers refuse to end, even if the climax, if the nirvana, roams in our most passionate memories. It’s Sequentia Legenda in all his magnificence.

Even flooded with influences of Klaus Schulze, the strength of Sequentia Legenda is his unique sonic signature which distances itself in this immense ceaselessly exponential pond of new artists in the field of the EM of the Berlin School style. A repetitive music which avoids the traps of redundancy with nimble fingers, “Extended” is a small jewel of minimalist music where the loops of rhythms and ambiences parade with as many nuances as subtleties, creating harmonious masses which are never crowned by synth solos. A rather unique fact which describes marvelously the thousand and one wonders of “Extended”. I adored from the first to the last second!