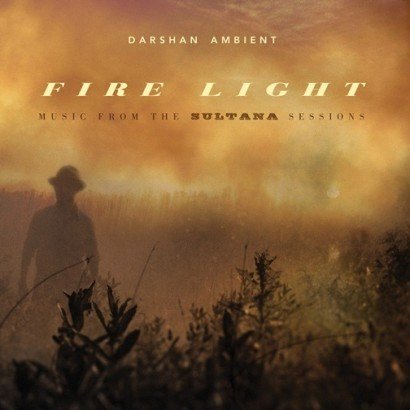 Against all expectations, and it’s always the case with the music of Michael Allison, I devoured each of the notes of this peaceful album “Fire Light” from Darshan Ambient.

I always have a little of difficulty speaking to you about the music of Darshan Ambient. The line is so thin between his approach of New Age bard and these taciturn moods where the bass crawls like that of Patrick O’Hearn and where the lines of synth sigh some sad black murmurs. But in a case as in the other one, his music remains very beautiful and mobilizes these moments of tranquility necessary for any good balance. And as much I have devoured all the albums that I reviewed, as much I fed myself amply with the same greediness with “Fire Light”, an album stemming from the sessions of Remember the Sultana which was composed within the framework of a soundtrack for the documentary of the same name which redraws the sinking of the steamer boat Sultana on the Mississippi on April 27th, 1865. A shipwreck which made more than 1 800 victims. I still haven’t heard the music of this documentary. And if “Fire Light” is some leftovers, I can only imagine the beauty of Remember the Sultana.

It’s with lines, black breezes which sing as those of Brian Eno in The Ascent that “Sunrise on the Mississippi” guides our ears to the discovery of this last opus of Darshan Ambient. Here, the melancholy takes all the faces. As in “Water Lilies and Summer Ghosts” where carillons and notes of piano melt their harmonies as so seraphic as these music boxes of our youths in the slow violins’ sighs, while the warm woosh of “So Close” push its piano tears as far as the horizon can hear. These are two delicate lullabies which lead us to the tearful “Cherry Blossoms for Papa” where the violin cries and its tears languish in notes of piano. The longer title of “Fire Light”, the title-track is of dark ambiences with sibylline lines which drag like these clouds of dust over a battlefield while the notes of piano are as these eyes in search of human beings. These notes get more insistent but their spectral harmonies remain congealed in the elegiac woosh.

In spite of the delicate ringings of carillons, “At Last… Freedom” stays a gloomy title with its lines of synth floating such as clouds of human dust and its harmonies of trumpets in the Mark Isham charms. It’s very beautiful even if very sad. The same goes for “Across the River” and its orchestral arrangements which lay a beautiful movement of staccato. A short title with a full of emotional crescendo. “The Gathering of Waters” is another slow title. A title full of atmospheres where, if the imagination allows it, electronic elements let suggest to some jingles, like the delicate movement of wavelets on a quiet water, whereas the slide guitar draws some spectral whimperings. “Dusk” introduces us in the liveliest portion of “Fire Light” with a tribal rhythm of a kind of voodoo dance from the Bayous. The percussions are good and nervous. The synth throws lines which are perfumed as much by these chants of Isham trumpet style as by the singings of a rather mesmerizing voodoo choir. “Slow Walk to Memphis” is a delicious down-tempo flavored by a lento envelope. The juxtaposition of both contrasts is not however as charming as this piano which scatters its melody nuanced by the sorrow of the slow orchestral caresses. The pulsations of the bass-drum bring shivers to the back. “Sweet Water” concludes this beautiful “Fire Light” of Darshan Ambient with a slow tempo knotted around a slide guitar and around a thick cloud of violins which destroy their strings with movements of jerks or yet with soft tears which cry with the murmurs of angels.

Against all expectations, and it’s always the case with the music of Michael Allison, I devoured each of the notes of this peaceful album, very shadowed by a beautiful melancholic atmosphere, from Darshan Ambient. “Fire Light” is this kind of album to which we listen everywhere and where every title pinches us in a small end of the soul.

You will find this album or a link to order it on the Spotted Peccary web shop here.