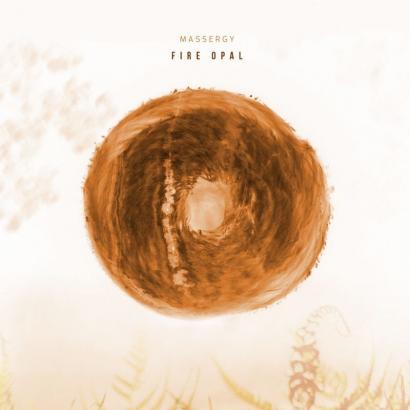 Fire Opal presents mystical contemplative sonic textures, sculpted into forms that begin and end. It has few transitions or conventional song structures beyond fade in and fade out, unfolding as time goes by. I like this music, it’s not trying to push you or tell you something using words, it just does its thing and you can either listen carefully or you can just let it wash over you and discover your own thoughts. Plus, it features lots of different simple guitar sounds without trying to show off or dazzle, and I appreciate that. It is a timeless atmosphere that you can turn on and off whenever you like.

…night sky, you cannot see them, but you can imagine them up there. Textural ambient electronic sounds with almost no melodies, there are rare beats or pulses. Massergy has not used sequencers in the making of this album. Therefore, mostly what you will hear is just timeless sonic textures, with minor instrumental episodes. The whole album takes place at night, I hear a series of mystical adventures in the wilderness.

The liner notes say that this album was captured nocturnally and entirely outdoors at Stillhouse Nature Preserve, created by hand, without the use of software or sequencers. It also says that subtle imperfections in sound have been retained, but I hear nothing that seems imperfect or even just a little flawed. Massergy has two other albums listed on Bandcamp, “A Novel Sense of Calm” and “Mestizo”. Massergy released them both in September of 2015 and both talk about being captured at night in an undisclosed nature preserve. Also, both list “Mellotron” as a tag, which is one of our only clues about the instrumentation employed to create this unique sound. On these first two albums it sounds like all synthesizer work, the guitar is rare.

The info on Fire Opal…

…does not include a list of instruments used in the creation of this album but there are guitars and a bass. Also, it sounds like there is at least one synthesizer which sometimes appears like an old church organ and sometimes like old synth strings/winds. So, some of the gear used to create the sounds here probably includes an old keyboard. Mostly what you will hear on the album Fire Opal are long and sustained tones or sounds, all instrumental with no vocals or words… well, it is possible that there might be ghostly ethereal human intonations hidden in there.

The album begins with an acoustic guitar accompanied by synth glow, finger picking slowly expanding like dawn. “Vinesong” (03:21) is gloriously slow, this sounds almost like a guitar instrumental compared to what is ahead.

More nice simple guitar fingerpicking, repeating patterns with an old church organ sounding long sustained notes in the background. Harmonics dance on steel strings. “The Shepherdess” (10:24) calls together her flock. About half way through the dance turns into a timeless pause and then the electric guitar and bass recover the gathering until there is a pause again and the sparkling synthesizer textures ascend, and along comes the finger picking acoustic guitar moving along at a gently increasing pace until it fades out.

…mind I am sitting in a dark room, a theater of my mind’s eye, and the music starts. “Lunar Cinema” (06:25) features a gentle smoky synthesized horn that creates a mood, on the imaginary screen in the dark there is one pale circle high above, the landscape is hard to see but it’s quiet and soothing. The immense black canyons turn out to be an old ruined city, it is very strange because not one light shows glowing or even flickering on. Perhaps there once was something very wrong that happened here, and now the city has been dead for centuries. The moon barely illuminates this peaceful scene, but the unspoken story is huge.

A sparsely vibrating electric guitar and bass leads the way through a synthesizer fog, with sparkling electronic sounding glockenspiel accents, “Cold White Smoke” (17:57) is a long journey, after the sparkling part things slow down to a mysterious metallic tap and creak, hidden in the fog. Eventually the vibrating electric guitar emerges, gently returning and pausing back and forth, and eventually there is a sound just a little like a sequencer bubbling away in the fog, but it is simply a handmade mallet on wood pulse pattern happily repeating. In the end it’s just the vibrating fog.

With a mystical light…

…through impossible colors a slow mood unfolds, “Fire Opal” (17:17) includes little sparkles that are hidden in darkness, an ethereal old church organ holds slow notes and the mood suspends time, cautious steps in unseen territory, timeless echoes with birds somewhere far overhead. It wanders near what appears to be the seaside, for a few moments you can hear the surf in the darkness. For a few moments time stops as you simply try to comprehend the beautiful miracle.

The traveler “El Viajero” (05:25) is strumming the classical guitar in a very old church, the guitar chord changes are right where they should be in the progression of the music but there appears to be no traditionally repeating song pattern, only wandering ethereal time spent contemplating the journey ahead and behind.

…“La Extraña” (09:25) brings it all together with a lone guitar and that old church organ sounding long single notes, which lead into a sparse bass and lightly tapped symbol tempo, marking the steps in slow dreamtime. The vibrating electric guitar emerges as the mood remains without quickening. It ends coming close to developing a melody, but it remains unbordered and true to the formless space that allows all thoughts to wander freely.

You can buy Fire Opal at the store of Spotted Peccary Music and Bandcamp.