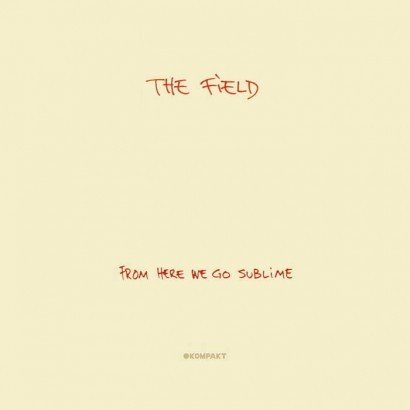 The Field — From Here We Go Sublime Tracklist:

Every track on the debut album From Here We Go Sublime of Axel Willner, the Swedish ambient techno producer behind the Field, feels both buoyant and wholly submerged in something horizon-fat and translucent. Listening to it is like holding your head under heated water with only one iPod earbud attached—vague, blurry, a snub of the eye that makes clarity seem so dull. Look at From Here You Go Sublime’s ten-minute centerpiece, “The Deal.” Placed just after the record goes from its relatively floor-fit starter’s shot —if you can really call anything on From Here ‘floor-fit’— Willner begins to play strange with the moist, hypervisual atmospheres he’s worked up in the album’s first-half. After a stiff bass drum pulse and what sounds like an overworked refrigerator motor whirring, Willner splices in his patented severed vocal loops, and gives it a strangely beatific sense of gravitas. It’s a weightless sound that neglects the retina to the reverb and odd shimmer of senselessness, and it’s just one of ten smothered gems in what is surely a timeless entry in Kompakt’s catalogue.

Of course, not many will be surprised by the Field’s stunning debut record. Hyperbole and instant idolatry have been with him since his debut 2005 single on Kompakt, “Things Keep Fallin’ Down”, the b-side of which saw Willner slicing the Four Tops’ “Reach Out (I’ll Be There)” and other samples into a gorgeous reinterpretation of laser-guided melodies. With his second single “Sun & Ice,” three tracks from which are included here, it became clear that “Things” was no fluke but instead an introduction to a producer capable of the most perplexingly simple fusions—something again struck home by his scene-stealer on Pop Ambient 2007, “Kappsta.” But even with dance music’s oft-stated reshaping for the home listener and expert full-lengths the last few years from Matthew Dear, Alex Smoke, Lindstrom, Ellen Allien, My My, Gui Boratto, Pantha du Prince, etc., techno often still has a difficult time shaping its furious twelve-inch time cycles into the recline of the full-length. This isn’t an issue for the Field. From Here We Go Sublime may not be an evolution for Willner, but it’s a singular distillation of his talents into one album. Mixing gauzy shoegaze, slippery ambient loops, and two-cheeks-on-the-floor bass drum bounce, the Field offers an idyllic work of startling novelty, and perhaps ‘techno’s most widely appreciable offering in years.

Evolving with a sense of cohesion and sly foresight that almost belies the album’s inclusion of past singles, From Here We Go Sublime is a success of temporal shifts and shy, first-morning sidesteps in mood akin to the way a day fills itself without your noticing—like how time often gets misinterpreted as its absence, just yesterday I was. Everything seems hyper-realistic, both its dances and its doldrums. He gently pokes and subdues, allowing you to forget moments just-gone and back now, but clearer the second time. And yet Willner manages to create something so hypnotic out of a seemingly effortless and basic set of ground-rules—something that’s bound to play to critics of From Hereas Willner simply hitting on a good formula and overusing it.

But, more to the point, Willner’s precise reconstruction of old sounds and songs into these new, shimmering forms feels somehow old-hat and startlingly inventive. Both “A Paw in My Face” and “Good Things End” wind their AM gold samples —“Paw”’s coming from Lionel Richie’s “Hello”— around healthy beats in gentle progressions that mount into full-out disco struts, in ways you can’t help but feel Jason Forrest should be studying at short-arm’s length. The samples become rhythmic guitar parts to spell Willner’s exhaust of space, and the songs’ bold, simple beats have to play into their clear atmospheres or give into the expanse. On “The Little Heart Beats So Fast” though, perhaps the album’s most stunning inclusion barring its last, the Field stunts and grunts with his samples in a Perlon sense, adding them into the block of rhythms, hallucinatory, grandiose, and darkly ambiguous. Likewise, “Everyday” makes astral ambient techno out of its referentialism, dissolving just after the 2:30 mark to show you just what you were listening to, RPMs gear-stripped so everything’s clear. But that’s when it really settles into itself, with Willner’s vocal-circles upping the ante on atmospheric glee for the next twelve months.

But looking back at “Kappsta” specifically, it’s clear the Field likes to play the mope sometimes. Opener “Over the Ice” —from last year’s “Sun & Ice” single— chops shards of Kate Bush’s “Under the Ice” into a gale of shoegaze, while “Sun & Ice” puts the same MBV-like touchstones toward creating an elegant, almost sylvan suite of quietude. Near the album’s end, after the slight tidal shift of “The Deal,” “Mobilia” stitches its loops into trim pokes of synthetic strings, powderburst against its peppery drum-patterning —a rarity for Willner— and stretched taut until you hear the clean guitar sheen Willner may have been using all along.

Even given a nine-track familiarity with the Field’s techniques, closer “From Here We Go Sublime” will have you stinking. Starting with a stark tonal reverb like a church organ spilled through dented pipes, Willner’s at his loosest with his samples; his shadow teasing is more overt now, prodding your sense of both collective and personal history, tugging apart one of the more recognizable choruses in music to show you just how much atmospheric bliss he can make of something so naked of novelty. And just after wrinkling them into grandfather clock noises, tock-tock-whoosh, his loops slowly lengthen and uncurl, and at 2:14, Willner opens his hand to the Flamingos and their “sha-bob-sha-bob.” And, if you’re impressed —and you should be— you wonder why you didn’t hear it before. But, with a debut album like From Here We Go Sublime, it’s becoming clear that perhaps the only one intimately concerned with the spatial gospel of these records and sounds we’ve remembered to forget is the Field. And, hell, if he can give us another album so comforting in its creativity every few years, he’s entitled to our amnesia.

‹ I Care Because You Do