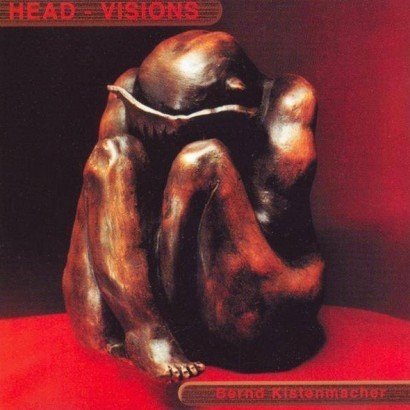 A truly masterpiece, Head-Visions is Bernd Kistenmacher’s album which sounds the most like a Schulze’s one.

This is Bernd Kistenmacher’s first album, after the making of 3 MC’s (Dream Sequence, Music from Outer Space and Romantic Times). Considered by some as his best work yet, Head-Visions is in the continuity of the 70’s cosmic and psychedelectronic musical experiences.

Rücksturz is a long heady track built around a slow and very mesmerizing evolution. It starts with hesitating chords. These dreamy keys, even melancholic, float within a thick cosmic and caustic fog of which the opaque sound waves oscillate between a melodious approach and some psychedelic hazes. This intro to hybrid musical paths is stirring up gently on a bass line with strummed pulsations and a prism of minimalism keys which pierces the secrets of a synth filled out by loud mordant veils and of its slow sinuous denouements, from which the long spectral solos are entangled around a progressive and hypnotic tempo. Percussion of a cowbell kind deepens the rhythmic structure on this track on Head-Visions, whose tempo remains rather slow, heavy and ambiguous, rolling in loop beneath the charms of celestial voices which murmur a lyrical equanimity. Little by little the synth waves which wind indefatigably modify their cadence to shape a steadier phase, thanks to a freer bass line which adds thus warmer approach to a very long and tetanized track. A long track which remains still caustic and metallic on a much hypnotic structure stuffed of long and sinuous synth solos in the purest vintage Berlin School tradition of the Schulze era, more precisely the Timewind and Body Love years.

Fine synth waves on Head-Visions are winding up around themselves and chaining up in the opening of Quitting Time, creating a hypnotic minimalism melody which navigates below a sky streaked by solos of an eerie synth. Cut by an incisive wave, the intro dives into a frenzy movement where chords collide under tones of a wrapping mellotron and a foggy synth. This long minimalist track drops sweet variances which embellish a listening hypnotized by an intense harmonious wealth from where fuses astounding solos of a synth with very Schulzian tones, periods Irrlicht and Blackdance. It’s very good and it’s a classic, as well as Rücksturz, of Kistenmacher’s repertoire.

La Tendresse leads us towards the more abstracted territories of Head-Visions. It’s a long atonal lullaby fed of ochred tones which espouse an oblong and silent wind of metallic frenzy. Finely this eclectic sound cloud is dissipating to let enter a softness of astral tones which soak in the abyssal lairs of a synth full of industrial mists and a Mellotron with wrapping caresses. Head-Visions is truly psychedelicosmic and floating Berlin School!

Recorded at a Berlin concert in1990, Dreamdance is offered as a bonus track on this new re-edition. It’s a little bit like the musical reflection of Quitting Time, but in a more ethereal way and a less tetanized sonority, with synth waves which become entangled and create a soft bed of oscillations which roll in loops on a beautiful and warm bass line. Slowly the tempo is becoming denser without ever overflowing its warm frame, thanks to a magnificent fluty Mellotron which bewitch pleasantly the listening.

There is a lot of people who claims that Head-Visions is the album of Bernd Kistenmacher which sounds the most like a Schulze’s one. So much that an Australian fan once told Bernd that it’s the best Schulze album he heard! We can’t deny the similarity, but Head-Visions has this unique cachet because of its muddle of ochred and tetanized tones which insufflates a caustic touch to an album which blends audacity and melodies with its absolutely divine synths which cross enormously the Schulze’s ones. Head-Visions is an inescapable album, still available by the means of MellowJet Records and lately on a 180 gr vinyl edition. Head-Visions is a must have for fans of vintage analog Berlin School EM forged in the breezes and aromas of Klaus Schulze’s Picture Music to Body Love.