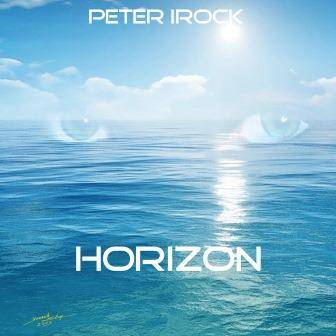 Peter Irock has collaborated with musicians and recording studios, in particular in Ticino, as a composer and arranger. He created music ‘on demand’ for numerous events, thanks to his skills and extensive knowledge of his instruments.

The first track “Horizon” starts off with a majestic opening and enchanting flute sounds, accompanied by a female voice. We hear layers of beautiful cosmic sounds. “Horizon” builds up to a nice smooth rhythmic track. The music reminds me of Tangerine Dream but has the special Irock touch of rapid alternations in patterns. As the track evolves, we hear a groovy clarinet solo. Then horn sounds take over. This is a very good and surprising track that makes it hard not to move your feet.

“Mountains Dream” is the second track of “Horizon”. All kinds of smooth sounds are building up until a very catchy rhythm arises out of it. A euphoric guitar melody emerges and flows gently through the different patterns of rhythms and effects, along with an attractive synth voice. Excellent E-rock! Very well composed and produced. It all fits perfectly together. Irock knows how to tame his gear.

The third track of “Horizon” is “Everest”. A promising start leads to whispering Tuvan voices. It’s like they are calling you to join them. A Vangelis like sequence emerges with accompanying Vangelis like sounds and effects. This is a very smooth track that makes you longing for a world where rest and piece reign. The singing female voice and choir emphasize the attraction of this world. An absolutely lovely track!

“Phenomenal” starts with dark sounds and whispering voices. Then a cosmic sounding melody comes in place and meanders through the soundscapes of the track. Very relaxing. Dark sounding textures come and go just like the melodies that pull us away from our reality. Then a fast sequencer takes over control and a fat kick drum starts off. After a short hypnotic and very rhythmic moment, the smooth textures return, together with a flute sound and whispering voices that are putting us at ease again. A beautiful track.

The last track of “Horizon” is “Moonlight”. This track starts off with eerie sounds and whispering voices. We are waiting for what will evolve from this. Then bombastic Vangelis like outbursts pave the way for rhythms that alternate with more ambient moments. At the end of the track we hear beautiful Vangelis like soundscapes again. A majestic closure of this album “Horizon”!

“Horizon” is a very good album, very well produced. It offers ambient moments as well as very rhythmic trips, accompanied by alternating sequences and bombastic outbursts. The music of Peter Irock reminds us of Tangerine Dream and Vangelis, but Irock adds more than enough of his personal touch in order to make this album unique.

You can buy “Horizon” here.