As an accomplished and highly sought-after composer of music scores for film, David Helpling is continually honing his compositional skills. “Creating music for film and video projects is wonderful and rewarding…but it also has its limitations. I think the emotional writing and technical experience of scoring certainly gets me closer to the core of what is important in my own music.” As a young teen, David Helpling pushed himself to learn guitar – experimenting with various effects and signal processors to create illusions with sound. Together with his passion for synthesizers and percussion, this guitar sound became centric to a complete vision and musical style that expresses sonic moods with a definite soundtrack feel. “Music is always in my head. That is how I write. I am always dreaming.” 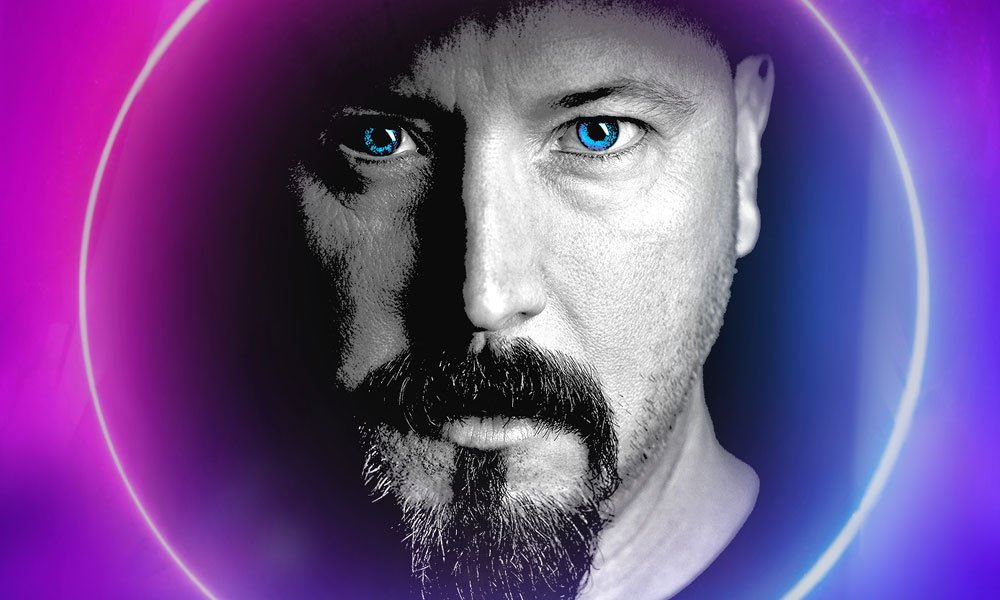 1. About the album IN

Imagine the vast universe as seen through a microscope, represented by symphonic cinematic electronica, through the electric guitar and keyboards, sometimes with transcendent ethereal vocals. This is the sound of unlocking the mysteries of dark waters and revealing things moving across the bright sky, bringing listeners the discovery of unusual and unexpected phenomena. David Helpling brings his unmistakable style and dense sound sculptures to a deeper, more powerful, and cinematic level. Since 1996 he has been creating music for collaborative and solo cultural landscapes.

IN was born from finding wonder in the tiniest of places, nature wrought in new colors; the greens and blues of tree and sky replaced by microbial fuchsia, luminescent folded violet. Your choice, CD or LP, the album design is by Daniel Pipitone and features works of macrophotography by fine art photographer Brandt Campbell. This is notable as an epic effort for Helpling, and Spotted Peccary is supporting this project with as many formats as possible: double vinyl LP, double CD, Mp3, Apple Lossless, Immersive audio, Spatial Audio, all available singly or in a limited-edition bundle.

Composed over ten years, the album features several guest artists, including vocalist Nidhi Bhatmuley, who Helpling first worked with when he created the film score for Trade Offs, which immersed him in the music of India. Vocalist Miriam Stockley has a distinctive solo voice that has graced several film and TV soundtracks such as Lord of the Rings. The electric cello of Matthew Schoening provides a spiritual and illuminating sonic experience. Schoening is a founding member of the internationally acclaimed world fusion ensemble Ancient Future. Multi-instrumentalist Benjy Wertheimer plays the esraj on this album, and is equally accomplished on tabla, congas, percussion, esraj, guitar and keyboards.

We are walking on sand that is…

…fine-grained and smooth, which preserves the impressions left by the waves. Even on the calmest days, Earth’s oceans are constantly on the move. At the surface and beneath, currents, gyres and eddies play a crucial role in physically shaping the coasts and the ocean’s bed; in transporting and mixing legendary creatures, plants, inanimate objects, or forces of nature. “Waves Dream of Breaking” (7:32) brings visions of a vast ocean shore and sky; imagine rapid camera motion over the waves, as if we are a gull soaring, wheeling, and gliding, exploring an extended sacred circle. The center is a vortex of spiritual energy and power which represents a separate and sacred realm, one not of the material realities.

Vocalist Nidhi Bhatmuley has the power to elevate consciousness to the level of the divine, interacting and interlacing with the instrumental modalities which complement one another. “This Burning Sky” (7:20) represents cosmic energies and communication between worlds. Helpling’s nimble fingers dance on guitar and piano, starting with gentle ethereal vocals and percussive sensations, enveloped in flames, only to be reborn anew, then breaks into a dive, soaring freely and then plunging upwards, the sun is bright and high, and the vocals get more energized, new textures visit and vanish. 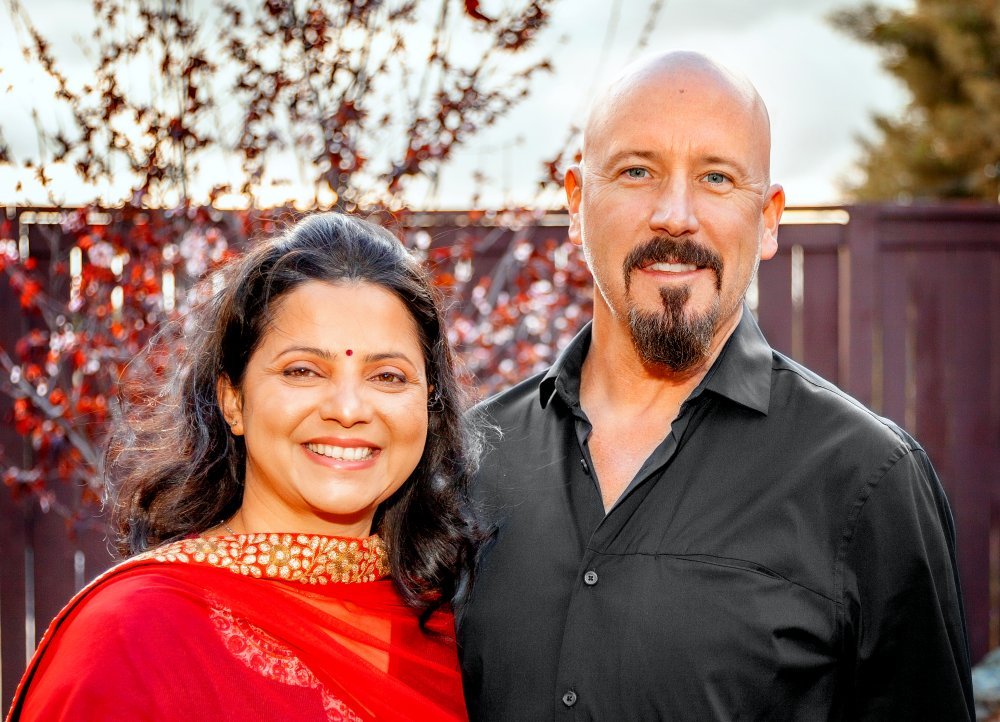 The stunning part is that this…

…surprising beauty is true no matter where you go. A pattern has been established, cycling melodies break open and gain more altitude, sparkling full orchestral strings sweep over us: “Only What’s Been Taken” (6:26), the tiniest sounds are transmitted with a speed to which the ear is unaccustomed; I am always struck by the echo and reverb effects unique to this medium. “Here All Along” (6:24), is denser than the atmosphere on land but almost as transparent, the guitar establishes a pattern, warm electronics build, electric guitar and keyboard scatters on high, the clouds colored in bright, wonderfully shaded hues, and then slowly fades.

“Still As Stone” (6:12) brings spinning melodic small bells or chimes, the guitar joins in, later strings and interesting textures layer until the music hits an open spot where things quiet down. There is no empty stillness, there is constant motion and metamorphosis, there is building density and then release returning to the bells and the patterns build and layer all over again.

Benjy Wertheimer plays the esraj, which belongs to the category of the chordophones, stringed instruments. This bowed sonic vehicle is usually heard only in the eastern and central regions of India. It is played upright like a cello. On “The Bliss You’ve Always Carried” (8:00), the sound of the esraj joins in the melodic patterns weaving around, fingers on electric guitar strings making patterns for a call and response out above the ocean of bliss. Somewhere around midway a percussive shaker establishes itself; planets, moons, stars, nebulae, galaxies, and comets all seem to emerge through this magnificent and glorious universe bringing peace and pleasure to all who hear.

Miriam Stockley has a distinctive…

…wordless vocal style that floats through “Slipping” (8:00), intangible and authentic, carried with perfect distinctness in the midst of the floating electronica, starting from a distant point to cross through a huge open area, embraced by a pattern that comes along. Change happens, the density opens up then returns with the vocal colors.

The outlines of the continents allow the seas to be divided into five major parts: the frozen Arctic and Antarctic oceans, the Indian Ocean, the Atlantic Ocean, and the Pacific Ocean. “The Cold Distance Between” (5:55) to me evokes a frozen sea that opens up a new world of possibilities, now the travelers of time reach a summit of this half-crystal, half-meteor vessel, continuing the open icy studio sound, soaring over oceanscapes, and rolling slowly as the music steps along.

Matthew Schoening’s electric cello in the track “You Already Are” (6:42) provides a warm safe blanket of inspiration and healing, reflective, refractive, and translucent, it saturates the air and gives such rays the appearance of luminous celestial objects and phenomena, all of which give way to vast spaces of deep and mystifying ambience. Tension builds, the vista expands.

…what sounds to me like a mbira pattern and expands into greater depth. At points, the beat stops and leaves us dangling in mid-air, the beat returns and the symphonic patterns build further. A piano seems to replace the mbira sound as the main instrument. “Bending Towards the Night” (8:21) has a shimmering opening, featuring a high-altitude electric guitar in an aerial arcing focus, with bells and keyboards that stop and start, they build and release silver synth zephyr bursts in sequencing lights, the track builds itself out deconstructs and, in the end, lingers as an endless reverberation.

A hierarchical structure of matter begins to form from minute variations in the mass density of space. “In Waves of Fire” (5:49) brings supernova explosions, gamma ray bursts, quasars, blazars, pulsars, and cosmic luminous radiation, a keyboard, a shuffle beat, layers pull in more matter, and organize into groups and clusters of galaxies, then into larger-scale superclusters. There is lots of motion, cymbals splash, and the cycle builds and then explodes and soars into a wider atmosphere.

What is the mind’s ultima Thule? Also, what substance must be regarded as first, and therefore as the seed of the universe? What is the eternal Something, of which the temporal is but a manifestation? I imagine that it is the concept of home. The climax track, “I Too Am Coming Home” (6:44), Miriam Stockley provides refreshing reassurance, strength, affirmation, prayers, supernatural portents, angels, and in the end, the mists are dispersed under the action of the sun’s rays.

You can buy the album IN at the store of Spotted Peccary Music and Bandcamp.