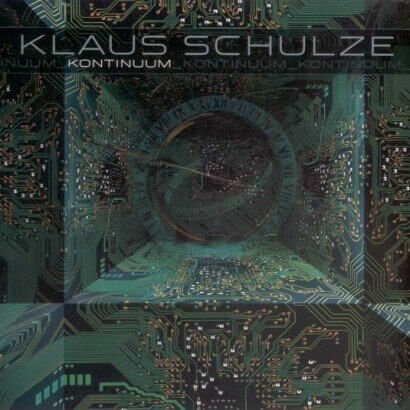 There are 2 ways to approach this last offering Kontinuum from our friend Klaus Schulze: with the ears of the former days and those more critical which are pervaded by a more contemporary state of mind. Navigating between both poles of Klaus Schulze, Kontinuum is an album which kisses the nobilities of his vintage years. The eras of Mirage, Blackdance and even Irrlicht. An album which also crosses thorny digital dimension and which surfs on Moonlake’s forbidden delights while leaving musical doors opened for the musical playwright whom can be Klaus Schulze when he begins to investigate his darkness by with sulphurous cosmic frenzies.

Sequenzer (From 70 to 07) on this album Kontinuum says it all! From the first chords to prismic tones which dance with the winds of space, Sequenzer (From 70 to 07) kisses the phases of a superbly soft sequenced maelstrom which wraps us and makes us glide in a dance of crystal clear chords swirling in the whims of our dreams. These chords fluttering with a contained fervour are forming an element of sequences which spin nervously and whose oval forms cross another line of sequences which flutter indefatigably in a surprising duel which caresses the rhythmic lifelessness. We float in this semi ambient and half cadenced universe deserving of the analog scrapbook from the Mirage era with this ode to the former days where the rhythm, divided by sequencer keys skipping on the spot, is letting itself gradually caressed by fine vocal filets and discreet orchestral arrangements. Dark strata wrap this frivolous tempo which swirls with drunkenness by the soft velocity of the isolated keys of which the asymmetric jumps eventually forge a surprising harmonious homogeneity and which a soft seraphim voice captures to bring it near time. It’s beautiful, it’s serene and it’s going to please undoubtedly the fans of Schulze in his 70’s mood. Sequenzer (From 70 to 07) is dying in the black winds which fail on the quiet opening of Euro Caravan. An anonymous voice pushes its wounds of time on these black and hollow winds, moulding a floating introduction which increases quietly its pace around the 9th minute. The rhythm is taking the shape of a cosmic gallop with a heavy bass line and chords with their tones of organic rubber which pound in the echoes of sober tom-toms.

Binding itself to the windy finale which anaesthetises the rhythm of Euro Caravan, Thor (Thunder) on Kontinuum invades our ears with a long music piece of atmospheres which are not without recalling the cosmic wanderings of Irrlicht. Fluty breaths are singing in the breezes of Orion which by moments are fitting closely to the groans of cosmic choirs. But we are on familiar ground here. These imperfect harmonies are the seal of Schulze who takes an obvious pleasure to fill his plasmatic universe of iconoclastic tones which serenade in a world of confusion. Organic chords emerge and dance in the tones of vaporous tom-toms while that a line of synth spits its nasal harmonies which ooze in cosmic mists. And subtly this ambiospheric intro sacrifices itself for a nervous rhythm, fed by curt chords which pound into a fusion of mists and subdued choirs. And Thor (Thunder), which has thunders only of its naming, continues its minimalist progression in an ascent watered here and there by more melodious soft lines and of ambiospherical contrasts where are squealing the shadows of solos, crying astral lamentations and rustles and stirring a quiet broth of ions, smiths of evasive rhythms, in this musical magma which refuses to explode, preferring the cosy comfort of its abstract approach.

Kontinuum is a wonderful album. Kontinuum is some great Klaus Schulze who puts back his old fragrances to offer us what he had refrained itself for ages; an album in the purest traditions of X and other jewels from that era. It’s thus a pleasant surprise for us who are flooded by all these rereleases from SPV Records and who are seeking for so many artists who are emulators of the Grand Master. I adored as much, if not more, than Moonlake, although that Playmate in Paradise… humm! It’s a journey in time when the magnetism of the analog sweetnesses and its minimalist structures fed our waking dreams and our hallucinations in groups. It flows into our ears and our memories as in la belle époque. An inescapable which is hiding in a wonderful jewel case artwork where we can read an excellent observation from KDM. And for a rare time, I am in total accord with his statements.