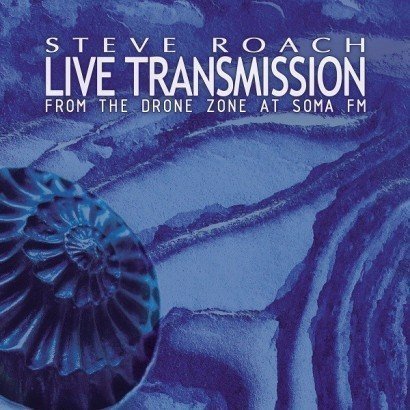 Live Transmission – From the Drone Zone at Soma FM (PRO293)

It may be just ambient music, it remains not less fascinating! Steve Roach does it again and blows out our minds with a stunning live document. Yes, Live Transmission – From the Drone Zone at Soma FM sounds like most of the Californian synth charmer works. But as every time, Steve Roach brings a little something different. Whether it’s a momentary source of inspiration or an idea collected in the air of time, the great master of the long ambient structures is still capable of making sing the wind and to make roar out rocks with a renewed energy.

Recorded live in the Soma FM studios in San Francisco, this last Steve Roach’s sonic adventure offers a fabulous balance between the enveloping ambient spheres and the bewitching shamanic rhythms which seduced so much on Dreamtime Return. Proposed and delivered without any overdubs, Live Transmission – From the Drone Zone at Soma FM offers two long phases, and a magnificent conclusion, which give all the latitude to Steve Roach to exploit completely his concepts of evolutionary structures which present breathtaking sonic landscapes.

The intro of In the Light of Day on Live Transmission is used as pretext for the magician of dunes in order to warm his synths. The atmosphere is of silk with these abstract tones which interlace into iridescent colors between our ears. The headphones well in place, we appreciate this sonic mixture where the shadows of seeping caves are dancing with tears of synths. We hear fine sibylline voices there? Certainly! But also oneiric singings swirling like the winds of a passive cyclone. It’s Steve Roach’s magic. His sound pallet moves the colors of our desires. We let ourselves be caressed by his dreamlike sighs which get lost into groundswell and which soothe the oblivion while that quietly we hear far off the first stammerings of percussions. Byron Metcalf drums a rhythm which stamps like a runner in search of his breath. A finely jerky rhythm where the spasmodic jolts are quivering in a rich sonic texture where breaths of unknown origins, as charming as puzzling, are raging of their spectral harmonies. The magic is instantaneous. You have to hear these percussions thunder in loops. Their echoes shape a fascinating line of ambient rhythm from which the organic tremor is structuring a delicate line which encircle our ears in a sonic landscape where the ghostly hootings sound like some intriguing black incantations.

And quite slowly, In the Light of Day plunges into the ambient spheres of Zone of Drones which, with its atmospheres of sadnesses, its vicious twisted waves, its sibylline breaths and its spectral shouts, wears well its title. Looking for Safety is like the breakthrough of the day further to a dark night of remorse. Its slow translucent flight leads us to a superb ambient tribal rhythm which awakes our souvenirs of Dreamtime Return. It’s like thunders and lightnings right in the sun, where a handful of sonic clouds wraps with a musical tenderness an organic rhythm of which the wet palpitations resound in a fascinating spiritual trance. The rhythm fades out in the morphic sighs of synths and of their idle singings, pouring the vestiges of Looking for Safety into the guttural breaths of Reflecting Chamber.

Although the drones on this Live Transmission draw hostile clouds, the atmospheres are less dark than in Zone of Drones, mainly because of the beautiful lines of the Fujara flute that Dirk Serries caresses with tenderness. And little by little, Byron Metcalf rums a slow and bewitching tribal rhythm where the tom-toms resound like oblong lassoes in search of air in the curves of the harmonies of a black synth and the sneaky hoarse breaths of didgeridoo. And when the howling winds tip over the bridge between Reflecting Chamber and Kairos Portal, Steve Roach’s aboriginal rhythm takes us by short as much that it runs after its percussions in a powerful final where the abstract nature from Roach bursts out with passion between our two ears which have never got wind that the time has passed so quickly.

After such a strong first part of Live Transmission, Vortex Immersion gets between our ears with an impressive ambiospherical pattern filled by gurgling and by deformed sound serpentines. The synth lines pile up and dance with their shadows in a heavy arrhythmic movement where only the soft impulses of the synth strata and the rustles of an organic fauna liven up an abstract debate. The phase shifting is rather slow and Steve Roach uses the first 10 minutes of Vortex Immersion to weave a fascinating sound scenery which takes all of its dimension in a pair of earphones. Quietly, slyly the rhythm appears. Deaf pulsations resound in an industrial hubbub, plundering on their resonances and drawing the plan of a rhythm which takes all its time before hatching. The sonic atmosphere is enveloping and we can hear far off the hand percussions getting out of the imprisoning shadows coming from synths howler.

And after 20 minutes of this part two of Live Transmission, the rhythm goes finally out of its den. It drums in a sonic scenery as much imposing than a still tornado, marrying these frenzied spasms which draw movements of locomotives running away to heavens and landing in the hiccupping convulsions of Westwind, there where the fury of winds knocks down a tremulous structure of rhythm. Caressed by winds which feed on astral voices, they skip energetically and swirl frantically, a little as a helicopter in distress, in a dreamlike and organic sonic pattern which quietly shapes a very ethereal finale. Written for his 58 years on February 16th 2013, Today is a wonderful piece of music which awakens in me memories of Structures from Silence. It’s like if Reflections in Suspension was dressed in the suit of Quiet Friend in a delicious organic pattern. It’s 17 minutes of pure happiness where the alchemist of sounds embroiders a soft structure where the delicate sequences crawl in a sonic pattern a bit ghostly. The concert of locusts and the sweetness of the elegiac singings bring us in another cerebral comfort level which is the privilege of Steve Roach’s works.