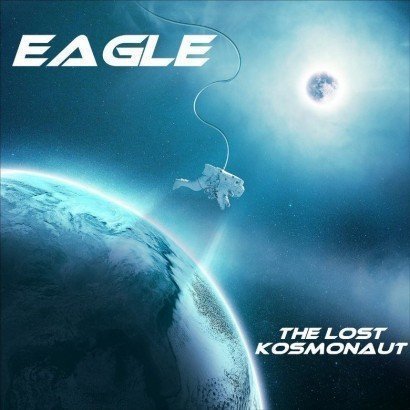 The Lost Kosmonaut is a very nice album. It deserves certainly to be submitted to the fans of Tangerine Dream, Jean-Michel Jarre and Vangelis.

My first and only contact with the music of…

…Arend Westra, the man behind Eagle, goes back to the album “Breaking the Laws of Physics”. That album was a release by the planetary duo Parallaxe at the end of 2015. And if I remember well, I had enjoyed quite much the melodious approach of this duo, which served well the source of influences of both musicians. Parallaxe is Arend Westra, from the Netherlands, and Brian Brylow, an American of Wisconsin. The Lost Kosmonaut is the 3rd solo album of Eagle. I find with pleasure a collection of 11 titles which flow agreeably between the ears. The album has not too much complicated electronic rock and has just what it needs as sound effects and electronic adornments to arouse quite well the lover of sounds in us.

The introduction of “Out of the Blue” is sewn of multiple orchestral layers which waltz weakly. Some tears get loose and moan on this zigzagging bed whereas isolated sequences skip on the spot. They are awaiting other elements of rhythm which will solidify the base some minutes farther. In addition, the tears are switching for songs of specters hooting over this amorphous rhythm. The track divides the rhythm between percussive pulsations and sequences which sing such as glass nuggets. So, shared between these sequences and some keyboard chords strummed by a dreamy pianist, the harmonious portion of “Out of the Blue” is dense and diversified. It has ethereal lassoes which run in circle in the background décor. Easy to like, you have in this title, which however puts down its finale on a too quick fade-out, the main lines at the level of compositions and structures of The Lost Kosmonaut.

The electronic vision of the Dutch musician…

…hits his aim with the ambient rhythm of “The Bookworm” which swirls as an endless spiral and where roam notes of an intergalactic cowboy. The arrangements are quite effective. Also, the attention to details in the very melodious approaches of Arend Westra is the equivalent of a Chris Franke on sequencer. And this, without taking away a thing about his rhythmic structures.

Awakened by a good percussive fauna, “The Superclean Dreammachine” drags us to the borders of cosmos. It has a circular tension of which the stroboscopic outlines imprison a nice fusion of harmonious elements. “The Forgotten” is a beautiful electronic serenade. A serenade living on a fleet of violin layers, which move forward as so slowly as these mislaid prisms which try to shape a harmonious bed. The movement drifts with its soft moving groans which collapse in a rise of intensity created by the ascendency of a bass line a little after the 3 minutes. If we are of a romantic soul, another nice ballad waits for us with “Summerdream”. This ballad is, on the other hand, more enlivened.

Defying the rules of homogeneity…

…Arend Westra strolls our emotions from one style to another with the very good and filmic “Mount Kailash”. The rolling’s of big timpani drums imitate the sound descriptions already established in the domain. I think among others of Mike Oldfield and of Vangelis at the doors of his celebrity. This is a very good piece of music which follows a velocity abundantly watered by some very harmonious synth solos. The title-track is a solid E-Rock with a very allegorical vision of the synthesizers and the beatboxes. It’s a lively track with effects of arcade games who swirl and sing very well. I must admit, these solos are as much harmonious as acrobatic in this universe of The Lost Kosmonaut. I feel an influence of Peter Mergener here, which is kind of very rare and therefore we hook rather fast to this good Berliner rock.

…a sound eagerness with some effects borrowed from the universe of Jean-Michel Jarre. Also, this track has layers which float like those of Vangelis. They float on a structure of rhythm, animated by a good play of the sequencer. It spreads a good energizing dose with keys which fidget as iron balls on a conveyor. “Martian Winter” is another good title. The rhythm moves slowly forward with a meshing of sequenced pulsations which remind me a little of Johannes Schmoelling’s evolutionary rhythm in Wuivend Riet. The synth layers interlace in a cosmic and seraphic approach in what sounds like a kind of communication by drums between distant tribes.

“Deckard’s Dream” is a title filled of…

…intensity with poignant layers which whistle with their dusts of orange rust. Ambient with implosions which propel secret movements. The music scatters phases of rhythms which are driven by a catapult, while they pile up banks of emotionalism. Fragments of harmonies come and go in this monolithic structure. Furthermore, they are adding more charms to a music which the source of origin would have been easily guessed.

“The Last Page of the Book” ends a rather pleasant listening with a very Tangerine Dream-like approach. As a result, this track unifies the fragrances from the vintage years and MIDI. After a rather austere introduction, a nice flute sings on a bed of sequences which sparkle with whipped impulses of the kicking. The hold of a layer of dark voices doesn’t give an inch to the moods while that some thin lines of voices moiré give a sibylline aspect to this choir soaked with the coat of arms of TD of the Exit years. Behind this décor snores a structure of rhythm which will explode with the awakening of the sequencer and with splendid percussive effects a little after 3 minutes. They are giving the best moment of The Lost Kosmonaut. This album deserves certainly to be submitted to the fans of Tangerine Dream, Jean-Michel Jarre and Vangelis.

You will find this album as a direct download (DDL) only at Eagle (Synth.Music) Bandcamp.