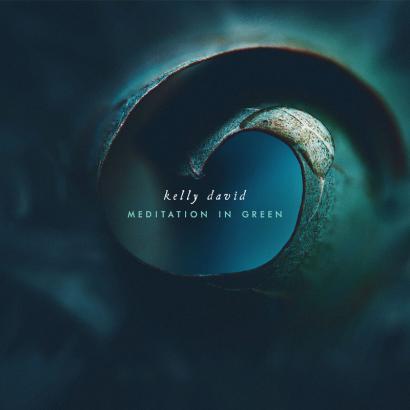 Meditation in Green is an organic ambient electronic soundscape, music that is challenging at times and soothing at other times, where tensions build and release. These are your new ears. Once you hear Meditation in Green, things will never be the same. Even after you hear it, when you listen again there will be some surprises. There is much to listen to, and to listen for. My expectations are constantly confused by the new musical forms displayed here. No worries, I suggest just letting it flow and cautiously listening to what happens. As far as I know, we have not physically lost anyone to the jungle or delta just by listening to this, but some precautions would probably not lessen the thrill of the listening experience. The sounds are varied and change constantly. Meditation in Green makes good use of all the echoes. Listen and wonder.

Meditation in Green is a…

…continuation of a musical journey that began with Kelly’s first album, Broken Voyage, mixed and produced by Steve Roach. On his second album, Angkor, the sounds came from a first reflection of Asian travels and deep fascination, both academic and experiential, of the ancient Khmer civilization that dominated SE Asia in the 10th century. Steve Roach mastered Angkor, contributing his sonic treatment to the mixes. After that, for a shared album, The Long Night, is a full-on collaboration with Steve where they worked side by side in Kelly’s Denver studio and Steve’s Arizona studio, creating a deep work meant for the virtual dead of night.

There is no melody or beat…

…so is any of this music? Yes, if music is an organization of sounds, and it sounds to me like water, rain, thunder, ringing metal, a little shortwave radio, a few birds, some frogs, a sustained buzzing and rumbling, with some percussive moments, shimmering echoes, things get louder, then things quiet down a bit. Then it changes some more.

Sometimes echoes start loud and then fade or diminish in a short moment, and sometimes they just continue on and on. When played backwards they get louder rather than fading out. Hit a gong and it sort of hangs there reverberating, and then fades away. The sound is constantly changing and transforming, which is a very dreamlike experience. I think that some echoes sound like being in a wet cave or a big old church. You can play sounds of field recordings in those chambers and you get a whole new kind of imaginary drama. There actually are places on Meditation in Green where traditional musical instruments are heard, but just for a few fleeting moments.

2. The tracks of Meditation in Green

Press play. The album starts with some echoey tones, maybe there is a choir, some metallic bell pinged a few times and then there is even more echo. Also, the first song has the album’s title “Meditation in Green” (9:37) I hear a distant subway tunnel where trains come and go, and there are some monks, there is some whistling or ringing, a waterfall, some rattling in the echoes. Shortwave radios can make lots of interesting sounds, and this composition uses what sounds to me like the sound of shortwave radios very sparingly, just a hint.

There are frogs doing their love calls, and it sounds like they were recorded at night. Eckhart Buehler provided the frog field recordings. Kent Antognini brought in some of the wildlife field recordings. Kailani Jurasek played the temple bell. From Kim Miner came the “processed sake babble,” imagine what that might be. The famous Vietnamese composer Vu Nhat Tan recorded various samples of Vietnamese instruments. Kelly David has lots of amazing friends.

We are next visiting the “Imperial City of Drone” (9:19) where the weather is pleasant but mysterious and a little dark. Ringing echoing Vietnamese instruments were recorded and then maybe played on a radio on a hot afternoon in a shimmering rainbow wind. Rumbling synthesizers come and go, they are baying in the distance and they are nibbling very close, both at once. The shimmering grows dense in places, I hear slow sustained old church organs, I think there are layers of them. Then it fades and quiets down, this is in the middle of the “song” and it never goes completely quiet, but it almost does. The shimmering rainbow wind returns and eventually becomes what sounds to me like a train in the distance, fading away while there are new things tinkling close to your ear. I think they sound like broken windchimes for a few moments.

A Bend in the River

The sound of water. A thunderstorm emerges, with rain and gushing water splattering. That fades and there is a sprinkling shaker rattling in some interesting patterns. Lots of excited birds chatter somewhere far off, jungle sounds. “A Bend in the River” (8:20) flows from the bird infested jungle down into a deep cave with winged jeweled bats, and on to something that sounds like it might be the putter of a friendly old motor on a boat. Vu Nhat Tan recorded samples of Vietnamese instruments and Kelly David did the rest. The old tribal beat takes over for a while, accented by the rattles, then the echoes take over, all in the cave of shadows. I think there are kids’ voices playing in there, just for a moment. Then the sun comes out again and stands bright and shimmering.

The next track is sparser, with chimes tinkling through the echo-mist, gradually sprinkling in some classic synthesizer atmospheres, then the sound of a rain-stick. This is the “Plain of Reed” (9:45) and there are places where the sound seems to stop for a moment or so, dead silence, and then later it almost bounces fog troupes off of natural cliff echoes, they call slowly back and forth. Seven minutes into the song a banging starts, with those sprinkling shakers (maybe from the previous track), and a sequencer is making that interesting rhythm again. Most of the sounds on the album do not keep a rhythm or even sound like the usual EM synthesizers, the sounds here mostly do other things, but this passage is a remarkable exception. This exception too fades and changes.

A big gong, a really mega-big one, possibly sixty yards across, or even more, being gently tapped, and only heard from a distance, but I am guessing, it is hard to tell for sure. “Lauko” (8:28) has lots of delicate details. It has a quiet section at the beginning after the gong fades, where the distant echoes creep in closer and closer, still in the dark caves. Bells reverberate with supersonic jets passing by overhead. Metal chimes and more bells and big pipes. Tiny pings. Big echoes. Sustained strings heard from a distance, they fade in and up and then pass by. I hear more really big bells being gently tapped. Coiling synthesizer snakes dance to an emerging percussion. The string section gets huge and then drops away. It ends on a gong, barely like the mega-gong heard at the beginning of this track.

Higher pitched ringing, shimmering chimes and maybe some river boat motors far off in the distance behind us. “Moonlight Mekong” (6:16) features Drew Redfield playing electric guitar. I hear something like an organ, but it fades slowly, and the echoes blend in with the guitar. It settles down and now I hear running water. The high-pitched ringing returns, with shimmering chimes that rush back and forth slowly, over great distances.

Bells of Can Tho

Thunderstorms and rain on the thatched roofs. Windchimes played like a flute in the wind. The “Bells of Can Tho” (4:07) take many forms. Ominous sustained glowing metal pieces being energized. Also, artificial night wind playing an imaginary aeolian harp, some ringing heard sometimes far away, sometimes further away. Then the whole thing fades to a close.

3. Where to buy Meditation in Green?