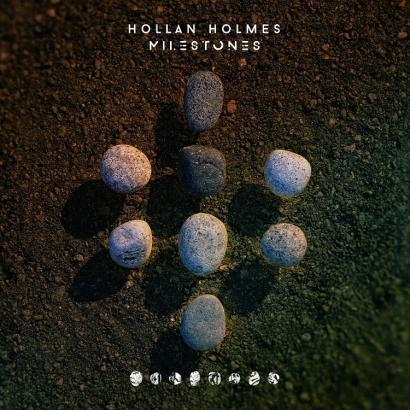 There was a time when people said that electronic music sounded flat. Early electronic musicians began by emulating existing sounds, that was all they knew. But now we are in a new era of ears where we can invent or discover sounds never before heard. We can do this by using processing effects including reverberation, phase shifting, flanging, and ring modulation. Also, we have so many new technologies that come along, which don’t differentiate between musical sounds and sound effects. Listen to Milestones and discover that synthesizers can be used to create entirely new sounds instead of mimicking other instruments. Unlike sculpting or painting, when working with music it is possible to listen to music the way we listen to the sounds that surround us in our daily lives, like rowing a boat into the darkness. Being able to keep going is what matters, right?

1. About the album Milestones

Electronic space music made with…

…software synthesizers and sequencer layers; human voices are never included except for the second track on Milestones. Use this music to explore the unknown, fulfilling the urge of hearing something completely different, as though from a faraway planet nothing like Earth. What you will hear are daring new sounds with a Berlin School theme of astronomy and science fiction.

It feels exciting, like walking on thin ice. It can feel so transparent, with note-by-note realizations utilizing hypnotic rhythms and extensive use of the sound-design capabilities of his instruments with repeated pitch, filter or effects changes creating genuine space-scapes. On Milestones, Hollan is creating or discovering music using different tone qualities that breaks free from existing ideas.

I had the opportunity to exchange…

…email with Hollan Holmes about Milestones and his creative process. He said that software synthesizers (soft synths) can make sounds no one has ever heard before. Hollan uses those sounds to describe human emotions or to tell a particular story in very creative ways. Also, working with soft synths is both very efficient and intuitive (most of the time). “Sound design is something that makes up half of my interest in all of my musical endeavors. It’s very important to my overall music making experience. Eric Persing and Richard Devine are among my favorites. Joel Thomas Zimmerman (Deadmau5) comes to mind, as well. They’re an inspiration, because they create sounds that are original, very unique and very emotive.”

“In the last few years, we’ve seen an explosion in software synth technology. The main attraction is that they’re very cheap when compared to their hardware-based counterparts. However, it’s so much more fun to play with hardware synthesizers, especially the modulars, because they’re tactile; you can touch them. Physically twisting a knob is so much more fun than pushing a mouse around on a computer screen. Each realm has their advantages and disadvantages. Also, the old vintage modulars were problematic, they would drift out of tune and you couldn’t save patches. Software synths pretty much eliminate those drawbacks.”

In reviewing the first track…

…of this album Milestones, what comes to mind is music brought by aliens from outer space. Transmitter (5:00) pulses with cycling patterns that build at a moderate pace with a strong beat sensation of flying, floating, cruising, gliding, or hovering and providing an amazing kind of acoustic atmospheric resonance.

One Giant Leap (5:17) kicks in by building layers of the pulsing cycling patterns with historic recordings of actual voices from NASA woven into the mix as an homage. “Okay Houston, I am on the porch…” Imagine, they must have heard these strange noises during the Apollo 11 mission, when Neil Armstrong first stepped on the lunar surface on July 20, 1969, uttering the famous words “…One Giant Leap For Mankind.” He knew he was going to be walking on the moon. Therefore, he had time to think about it, about the moment when human destiny experienced a major milestone. When asked, Armstrong said that he did not pre-plan what he would say and came up with the phrase only after the landing.

Experimental droning, pulsating sounds giving it an avant-garde feel, with melodic cycling patterns that pulse with added electronic ambient vocalisms drawn to a more mechanical and electronic sound, by using synthesizers to create new sounds to accompany and enhance these electronic realizations on a continuum of spatial imagery and emotion pure atmospheric minimalism. This is the travel and exploration leg of the journey: The Truth Laid Bare (5:44)

…sparkling sequencers weaving layers that build a genuine sense of awe and wonder. Imagine the wave forms of electromagnetic emanations from various stars and constellations for the sonic textures of this album Milestones. You can hear something happening right at that moment somewhere in the universe that has tremendous atmospheric qualities. While the journey continues, so does the beauty Slipstream (7:02). A slipstream is the area immediately behind a moving object. This area contains a wake of gases or water along with velocities comparable to the speed of the moving object.

West of the Pecos River is often referred to as “Far West Texas” or the “Trans-Pecos”, next to the Llano Estacado. It is a vast region of high, level plains extending into Eastern New Mexico and the Texas Panhandle. Hollan tells of his feelings about the vast territories where he lives. “While I love Texas, I do not love her heat. I’m definitely wired for cold weather. I guess my dream home would be somewhere in Western Wyoming or Eastern Idaho. I have a thing for mountains and clear rivers. Both are deeply inspiring and peaceful places.

Maybe I would spend Winters in Southern Utah, Arizona and West Texas. The Desert Southwest is crazy beautiful to me. I was born in Dallas, Texas. From there I moved to Wichita Falls, then Abilene, then to my current location of Euless. The land is what inspires me the most. I love the Hill Country of Central Texas, but I find most of my inspiration in the rugged lands of West Texas. While West Texas may seem more connected to Country and Western music, I think there is a connection between that land and more electronic based sounds. The possibilities are endless. It’s about how the land makes me feel.”

To the east of the…

…Llano Estacado lies the “redbed country” of the Rolling Plains and to the south of the Llano Estacado lies the Edwards Plateau. West Texas receives much less rainfall than the rest of Texas and has an arid or semiarid climate. Much of West Texas has rugged terrain, including many small mountain ranges, while most parts of the state are at or near sea level. The sound on this track, West Texas Backroads (7:05), sounds to me like pulsating sequences of woven melodic keyboard patterns, celebrating how the chords were layered into hypnotic, minimalistic rhythms, futuristic science-fiction themes that represent an end or a milestone of the journey.

The track Bulletproof (6:21) is about graduating high school and thinking we’re going to live forever. It’s about that nothing can stop us. And it’s about that nothing bad will ever happen to us and that feeling of freedom and energy and that we can accomplish anything. Patterns emerge from deep space sounds huge atmospherics more about color, not chords or melody, or just the tone, but also incorporating various other sounds. I’ve always found that really interesting. Listening to Milestones, I imagine rowing a boat all by myself into the pitch-black sea, or in outer space maybe?

“The Inner Sanctum” was a…

…radio mystery program, broadcasted from 1941 to 1952. In the music of this track I see no direct references to the dramatic wordplays with sound effects from that series. The name, Inner Sanctum, refers to a sacred place within a church, or to a private or secret place where few are admitted. Now that sounds more like this music, with its terrifying depths and coiling darkness related to space or otherworldliness, emphasizing texture, ventured into the world of electronic music, which is something that listeners will find fascinating. Inner Sanctum (7:12) reveals secret layers built upon a basic pulse, going deeper, opening into an electronic choir of immense dimensions and surrounding the audience in a cloud of sound.

Then we have The Phone Call (7:10). This is a fantastic tour through a beautiful one-of-a-kind cave with layers of electronic pulses and tones. They are woven into a melody of mystery and great expanse, an aggregate of multiple sounds and trance-like rhythms. These rhythms evoke a sense of spatial imagery and emotion or sensations of floating, cruising, flying and other transportative sensations. All of us have received at least one phone call in our life that changed us. Hollan was getting a phone call at work one day in the early ’90s from his wife’s place of work. They informed him that “We don’t know what happened, but the paramedics are working on your wife now and they’re taking her to the hospital.” That was an hour of uncertainty that he would never forget. She had suffered a seizure but is fine today.

The words used in the title…

…Something Wicked This Way Comes (6:49) are about 9/11. That was a milestone that definitely changed many of us. The title originally comes from a line in Macbeth, spoken by a witch in Act IV. Those words were also the title of a popular Ray Bradbury novel published in 1962, a story about a travelling carnival that comes to town a few days before Halloween and two youngsters, Jim Nightshade with his friend William Halloway, who have a nightmarish experience, and this track follows that strange dream with dark slow huge sounds, tranquil, hypnotic and moving, a feeling of contemplative spaciousness with lots of reverb and echo, haunted by some tentative bumps in the inky blackness.

In electronic music, it’s hard to exaggerate the importance of all of the deep space plus melodic sounds, hypnotic, droning rhythms, and shimmering keyboards. The sound of this final track on Milestones consists of ambient elements. These elements combine short, repeating sequenced runs of notes, which gives the music a rhythmic element. This piece is brisk and energetic. It is a beautiful tribute to a wondrous legend.

Ayyappan (7:19) is a legend in various regions of India, with some variations in the story. Ayappan is a hero usually shown with a bow and arrow upraised in his left hand, while in his right he holds either a bow or a sword diagonally across his left thigh, or sometimes in a yogic posture wearing a bell around his neck, and sometimes riding a tiger.

He is also sometimes called Hariharaputra and said to be born from the union of Shiva (The Destroyer) and Mohini (Goddess of Enchantment). Ayyappan the warrior deity is revered for his ascetic devotion to Dharma, which is the ethical and right way of living. Ayyappan’s military genius and daring yogic war abilities are used to destroy those who are powerful but unethical, abusive and arbitrary. Ayyappan has also been portrayed as the child of a priest whose father was murdered by the fearsome outlaw Udayanan. The outlaw also kidnaps a princess. Finally, Ayyappan then makes a daring rescue of the princess, where he kills the evil Udayanan.

3. Where to buy Milestones?

You can buy the album Milestones at the store of Spotted Peccary Music and Bandcamp.