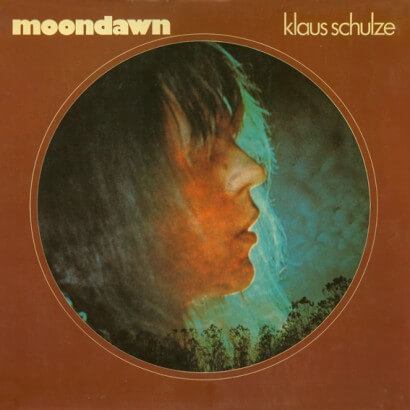 In the early 70s Germany experienced one of its most revolutionary musical movements. At the time of its occurrence, the British music press named it the rather derogatory term ‘krautrock.’ These days the negative connotation of the term krautrock has largely disappeared, and is now used to describe the experimental German pioneers of the time that combined rock and electronic instruments as well as their sounds.

Although poorly received by the press, the movement sprouted several of electronic and experimental music’s most influential acts such as Tangerine Dream, Kraftwerk, Neu!, Can and Ash Ra Tempel. Put simply, a name dropper could go on for days listing all the highly regarded artists that helped fuel the krautrock movement.

Despite being one of the founding members of both Ash Ra Tempel and Tangerine Dream, Klaus Schulze left both groups after just one album, finally deciding upon a solo career that has spanned dozens of albums spread out from the 1970s to today. With such a large catalogue and such a wealth of quality, it is hard to pinpoint the apex of his creations. Albums like Mirage, Cyborg, X and his tribute to Frank Herbert’s Dune all lifted the bar higher in the pursuit of electronic excellence. Moondawn is perhaps the shining diamond in Schulze’s room full of gold.

I prefer beauty. Of course I also use brutal or unpleasant sounds sometimes, but only for musical contrast in a composition. Beauty is more beautiful to a listener if I also show him the ugliness that does exist.

Floating on Moondawn is introduced with sparkling string noises, accompanied by an Arabic version of the Lord’s Prayer. For a German experimental musician and activist, it is strange to see religious doctrine appearing in his music. Yet Schulze claims that the opening was never intended to be anything more than an earthy addition to the sound. Klaus Schulze has often emphasised the sound in his works, using samples, synthesizers, spoken word; anything to enhance the sound of the work.

I am still looking for sounds that fit my imagination. Of course I am bound to the available technology in each time.

Despite being severely limited in terms of technology, Moondawn manages to create a wide atmospheric sound, utilising both the beautiful and the ugly. In Floating, Schulze innovatively contrasts beauty with ugliness. The haunting choral hums that fill up most of the song until 5 minutes in feel like samples from M83’s ‘Before the Dawn Heals Us’, an album that was recorded nearly 3 decades after Schulze’s masterpiece.

Music can do just one thing: to show emotions. Just emotions.

Like his peers, Schulze is also highly adept at transitioning between sounds. The haunting coral hums slowly increase in pitch and volume at the 5 minute mark, slowly being devoured by high pitched synthesized strings. A subtle organ arpeggio can be heard underneath, once again adding to that wide landscape that Schulze specialises in. The first sign of a beat enters in underneath the flurry, with spread apart one-twos. The organ arpeggio and drum beat start to take on bolder forms, with a frantic beat emerging from the chaos. The force is almost unbearable, in the face of a never-ending build up. Relief is found as the high synthesized strings fade out to reveal the organ arpeggio in its full glory. The entrance and exit of sound is almost unnoticeable, with the broad emotion of the song encapsulating the listener into a trance. 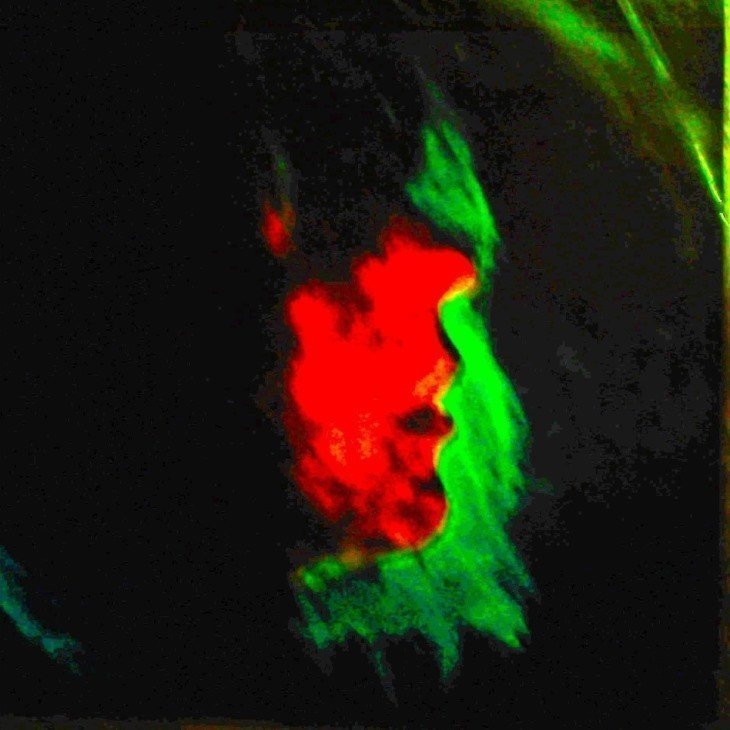 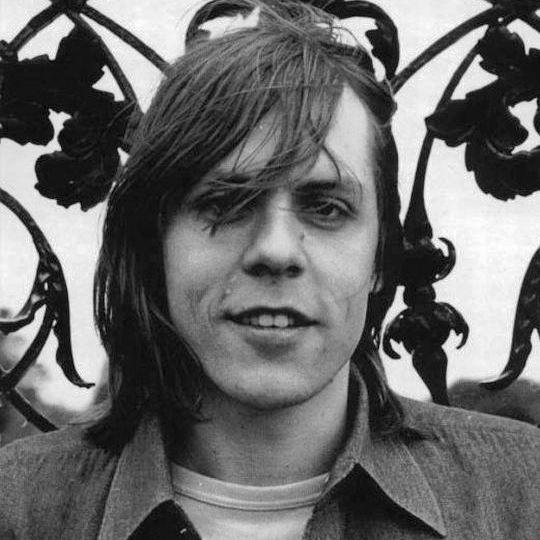 Whilst many of Schulze’s contemporaries failed to merge drum beats into the music, the beat in Floating on Moondawn is almost in perfect sync with both the fat sounds of the big moog and the high eerie mini moog tones. This is no surprise, as Schulze began his commercial career as a drummer in Tangerine Dream’s ‘Electronic Meditation’.

I hope never to get boring. If an artist cannot amaze people anymore, that’s the end.

At nearly 27 minutes long, Floating on Moondawn is a true test of those words. The passage following the build up is around 6 minutes in length with a keyboard rhythm and drumming dominating. Alien like fluttering synthesizer noises are mixed in briefly like a humming bird. Psychedelic big moog sweeps start to enter into the song, building the tension up. Much like the frantic beat of the song, many of the sounds only make fleeting appearances on top of the more constant rhythms. Each build up of sound and space is rebutted straight after by eerie sounds of ugliness. This contrast of tones make Floating anything but boring. The changes in sound occur at such a frantic pace that mapping them would be impossible. Unlike the similar epic electronic masterpiece of the time Phaedra, Klaus Schulze aims at a much more chaotic feel. If listened to hundreds of times, listeners could still find new unheard tones and patterns amongst Floating. Although perhaps not as focused as some of his and his contemporaries other work, Floating is unmatched in its wide frantic sound. The contrast between ugly and beautiful as the song crescendos into nothingness creates an almost orgasmic effect.

If Schulze had left Moondawn as a one song album, it would have probably been just as monumental as it is today. Yet once was not enough, Schulze had to craft out two epic pieces of electronic glory. Klaus Schulze has often made his anger towards his copycats clear. The much borrowed washing tide noise can be found in the introduction of Mindphaser on Moondawn, contrasted by mythological rumblings of thunder. Eerie synthesized strings soon take their place at the front of the song, with an almost organic tone to them. They stay the primary focus until about 10 minutes in, but despite lasting for around 8 minutes long, their tone warps enough to prevent boredom. Unlike the erratic Floating, Mindphaser is much more of a slow moving beast. Although both may be spine-tingling and haunting in parts, the two go about achieving this with opposing speeds and bands of sound.

My kind of working is best described as ‘improvisation’. I play around, and slowly a piece of music emerges out of that. Normally when I compose, and play the first note, I don’t know what note will follow.

In the 11th minute of Mindphaser, Schulze turns the song on its heels, going to surprisingly captivating drum solo. Schulze’s panache with the drums are brought to light, with both complexity and creativity, showing that he is easily on par with other more celebrated drummers of the time. Reverberating fat moog sounds soon accompany the drumming, adding to the widening sound but not taking too much away from the drumming. The precision of the drumming is made evident across its 14 minute appearance, soaring through space together with the varied moog sweeps. The last half of Mindphaser on the album Moondawn is surely one of the most astounding sequences of 70s German Electronic music. The brief breaks from the drumming only tease the listener into lusting for more, lusting for that restless beat, rhythm, tone and sound. The sound is once again almost unbearably mind blowing, before the song sadly collapses in on itself in an abrupt chaotic mess: Perhaps signifying the saying that nothing in this world lasts forever.

Moondawn is quite probably Klaus Schulze’s crowning achievement. The album utilises technology that was at the forefront in its day, yet today the sounds that come from Moondawn can be easily compared to many modern electronic musicians. This is partly due to Schulze’s massive impact on the electronic music world, with his improvisational approach to composing, paving the way for modern electronic music makers. Despite the many harsh critics of Schulze’s electronic music making in the 70s, Schulze continued on crafting gem after gem. His ability to create such a wide and voluminous sound split him apart from some of the more minimalist electronic bands of the 70s. Moondawn is probably the best example of this wide sound, spreading out an amazing variety in sound across two epic pieces. Perhaps the conclusion is best left to Schulze himself:

I did my music when electronics, synthesizer, computers, trance and techno were not around in music, not fashionable. At last, my music is now accepted and fulfilled by a new generation who does not have the prejudice of their parents; these kids grew up with electronic music of all sorts. It’s normal, that these people: listeners, artists, or journalists look for the roots of this music. And what do they see? Kraftwerk, Tangerine Dream and me. We are indeed some of the few who made our music with ‘exotic’ electronic means, against a lot of opposition and laughter, but with no compromise. We paved the way, if I may say so.