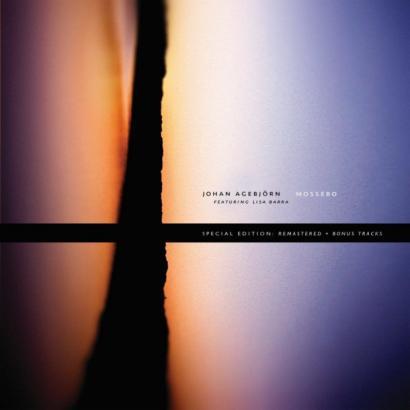 Mossebo is a dream about life and friends. They can dance, they can imagine new things and they spend enjoyable time in contemplation. What you will hear is a winter sky lit with a sweet voice, and sometimes a whole choir of angels, supported by an electronic framework. Johan Agebjörn creates music in a wide range of styles, by night in the disco with his collaborative project called Sally Shapiro and the rest of the time at his keyboard dreaming up some ambient electronica. This release of Mossebo is a Special Edition, a remastered edition with bonus tracks. Please have a listen, I think that you will enjoy it.

From Sweden, some synthesizer-based tunes with lovely ethereal vocals. I would place the sound on the disco dance-club edge of New Age music, with plenty of space for peaceful and satisfying shoegazing. This is a remastered Special Edition version with two bonus tracks, the original album was released in 2008 on the Lotuspike label, a division of Spotted Peccary Music. These songs sound to me like heartfelt ambient meditations with electronic beats, giving the music a rich atmosphere as well as a distinct forward motion into a science-fiction direction. Close your eyes, just feel the beat. I hear something that might be described in a thousand ways, and if the composer’s work had to be distilled into three words, imagine these ideas: melancholy, winter, and travel.

“Ambient electro” and “arctic ambient” brings to mind the night winter sky in Sweden. The beat here is airy combined with nimble, it does not overwhelm or crowd you with dense decorations. You can dance or approach this in a more meditative way. It is built for quiet individual listening and it can work in a social environment too.

The title Mossebo is from the place that Johan Agebjörn was living at the time he was composing this music, in a 19th century cottage in Sweden, called Mossebo. He spent some introspective time with his synthesizers which lead to what you will hear. It is mostly instrumental, with the amazing wordless vocals of Lisa Barra, and at times there are some spoken poetics, a male voice in the mix.

Johan Agebjörn met the Gothenburg-based vocalist Lisa Barra at an animal rights event in Gothenburg in 2003, where she performed some songs and had a CDR with her music. Her songs are a cappella, she has the voice of an angel, and so of course he started to sample them for some experimental ambient creations in 2004. Johan Agebjörn sent her the results, and she liked what he did, so they started to record some new songs in a studio. There is a very short video from some of the earliest collaborations with the duo performing live at a concert in Linköping in 2005.

Influences include Biosphere, Aphex Twin, Autechre, Kraftwerk, The KLF, Future Sound of London, Krister Linder, Derrick May, Pete Namlook, Laurent Garnier, early Moby, as well as Erik Satie and Claude Debussy. The sound is simple and relaxing, with layers of expression where you can feel the spirit of the song without being overstimulated by the technology.

Johan Agebjörn started in his teen years with simple gear, like an Atari computer (as a sequencer) and a Roland DJ-70 sampler. He is still is constantly experimenting and carefully gathering his personal sound system for his live DJ performances and for his studio work. For the Siberian Train compositions, he used a Commodore 64 for storage, employing field recordings he played on a tape-recorder and sometimes slowed down a few octaves. Johan Agebjörn’s mother had recorded some of the train coach sounds of the clattering railroad track and the passing bells at road crossings during a journey on the Trans-Siberian railway in 1987. These sounds were later played directly from the cassette tape during the song’s recording process.

…show piece featuring the voice of Lisa Barra sampled into an angelic choir, vocals with light glowing synthesizer support, “Dulciter Somni” (07:08). The title means something like ‘sweet sleep’ and is a masterpiece. “The Sound of Snowflakes Touching the Ground” (08:41) brings slow cold synthesizers up behind the ethereal vocalizations of Lisa Barra with clicky echoey beats, later come some words, spoken by a male, in English. Next a short interlude with light and low synthesizers and the Barra choir, the title track “Mossebo” (01:01). Then the sounds of water, a hymn, with waves: “The Sea” (03:40) blessed by the voice of Lisa Barra singing, maybe in Latin. But I like to pretend that she is singing in some dialect of Elvish, within an imaginary cathedral, and the synthesizer rumbles steadily below, with all the deep echoes.

“Ambient Computer Dance” (05:32) is a funky electro boogie, with a deep bleeple echo. It has a growing sequencer beat that gets stronger, throbbing with some huge undertow, asking you to get up and move, perhaps somewhat gently of course. In the end it floats upwards into the darkness. After a few moments there emerges a quiet glowing synth followed by piano, kind of a folk song with strong memories, no words, “Shoreline” (03:25).

…”Unitas Vitae” (06:24) translates as something like “life unit.” It builds slowly into a sleepy but somehow rapidly pulsing sequencer pillow, with long lingering tones shimmering overhead. Lisa Barra sings the amazing way she does, and there is a section or two with spoken words, a male poet (who else could it be but Johan Agebjörn) speaking in English. “Putting More Wood in the Fire” (02:00) is my favorite track on the album, and it features Lisa Barra sampled down to just tiny popping blips and beeps of her lovely distinct voice and the steady restful fidget of the sequencer.

Now it’s time to get on the train for a whole new place in the world. “Siberian Train Part I” (08:18) and “Siberian Train Part II” (08:11) take you through the snowy dark winter landscape, with occasional sounds like a short wave radio, some places are quiet and dreamy, some are more dense, and through the whole thing we hear the swaying rhythm and bounce of the train clattering, with the occasional passing bells on the streets, where the street traffic gates are down. The train keeps rushing continuously past the houses and darkness, then finally the whole thing eases into a night riding sequencer groove.

“A New Day Arrives” (04:54) and brings a synthesizer instrumental with just a hint of Lisa Barra’s ethereal glow. Now for the bonus tracks, “Kyrie Eleison” (04:50) which translates as something like an old liturgy “Lord have mercy,” beginning with the sound of rain and then Lisa Barra inside a big old echoey cathedral with the sequencer holding her suspended high up in the air. Close with “Unhappy Love” (08:39) a snappy sad electronic snare drum and ends with some persistent bleeple accents.

Johan Agebjörn creates music in a sonically wide range of styles. These styles include electro, house, and solo piano within two main projects. We have his work with ambient electronic sounds, and his work with a neo-Italo disco studio project. The latter consisting of pseudonymous female singer, Sally Shapiro. There are three Sally Shapio albums, “Disco Romance” (2007), “My Guilty Pleasures” (2009) and “Somewhere Else” (2013). Johan Agebjörn also runs the Husmus online / CD-R micro-label, and has appeared on exclusive tracks of the compilations “Die Welt ist Klang – A Tribute To Pete Namlook” (Carpe Sonum Records), “Chilltronica vol. 1” (Soundcolours) and “Collection 4” (Databloem). One track “Zero Gravitation” was included in a DJ mix by Matthew Hawtin on the 4CD “Richie Hawtin presents Enter Ibiza 2013” (Minus). Johan Agebjörn has a self-released piano album on CDR Music With Less Electricity from 2006).

“I am an electronic music maker located in Lund, Sweden. Also, I study psychology. I am a proud father. As a musician, I’m probably most known as the producer of the neo-Italo disco act Sally Shapiro, though I have released five albums, a dozen remixes and a few singles under my own name. And I care about animals, global justice and the environment. I am a vegan and I try to purchase ecological and fair-trade products as much as I can. I don’t like capitalism and I think the welfare state is worth defending. The entire artist’s share of the royalties for Mossebo are going to be donated to the United Nations High Commissioner for Refugees (UNHCR).”

Mossebo is a download only album. You can buy it at the store of Spotted Peccary Music and Bandcamp.