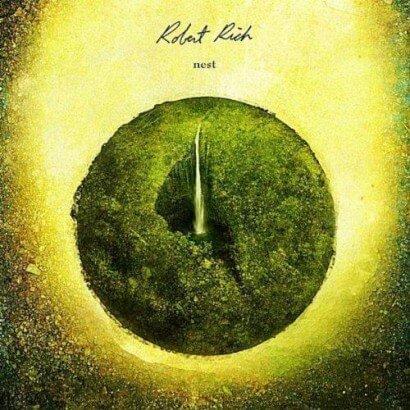 If you like ambient music, Robert Rich is one of those artists whose work you snap up the moment you hear about a release, because you know that it’ll be well worth it. Rich has been making ambient music since the early eighties and should be considered a true pioneer of the genre. However, that doesn’t mean the music he makes now is any less vital than his early work. In fact, I would suggest that this mega-lovely release is one of the finest of his long career at the forefront of ambient.

Rich’s discography of course does feature a variety of directions taken, and he’s done his share of experimenting with different sounds and moods. Often his music could come under the classification of “dark ambient” (such as his well-known collaboration with Lustmord, Stalker), but he’s also done tribal ambient, less melodic sound art, drift ambient, you name it. However, there are core elements to his style, such as his “glissando”-style guitar explorations, and his listeners look forward to hearing those elements on his recordings. Just for the record, my favourite albums of Rich’s career thus far are Calling Down the Sky, Sunyata and Echo of Small Things, so I guess you might say I enjoy the mystical, dramatic and nakedly beautiful end of the Rich spectrum best.

This means that Nest is already in the running to be my favourite Rich album. He notes himself that “I rarely make such calm music”, and though I’m not sure I agree with him on that point, there is no question that this music is very, very peaceful and very reassuring, conjuring up lovely pastoral images of forests and starry night skies. It’s unabashedly beautiful, and frankly that’s just what I have needed of late. I’ve been listening to the album heavily since I acquired it.

Nest starts with two pieces, “Memories of Wandering” parts 1 and 2, based around simple piano figures and quite redolent of Harold Budd’s work. Mind you, that’s what we say when anyone makes piano ambient, so I’m being lazy there. Still, you could do a lot worse than be compared to Budd at any time! Delicate pads and birdsong add the necessary atmosphere. The delicate sparseness on Nest is so finely balanced that you know you are listening to the work of an experienced master.

“Seeking Eden” on this album Nest features another Rich hallmark, flute, mixed in with sine-wave style synth to create a trancelike vibe both ethereal and tribal. This piece would fit on a number of his albums but it’s always nice to hear a new one in the style.

“Moss Carpet, Sky Blanket” could be part 2 to the previous since the same dark, nocturnal synth pervades the piece, but time Rich busts out the slithery glissando guitar for which he is so renowned. The effect is like lying on a beach staring up at the dome of the universe, picking out galaxies.

Another two-parter, “Generosity of Solitude”, follows, based around airy synths and extremely sparse piano and reminding me very much of Rich’s compadre Steve Roach’s Quiet Music.

“The Gate is Open” is another piece in the classic Rich style, the glissando guitar winding its way around cosmic walls of synth. It could go on for another twenty minutes and I’d still be entranced.

Finally, the album Nest concludes with “Memories of Home”, an evocative title that perfectly suits another mixture of piano, synth, field recordings (crickets are a can’t-miss relaxation proposition!) — Rich is calling us back to our true state of unity with nature, from which we have strayed so far. I sounded wise there, didn’t I? Well, he is. Listen and you’ll hear what I mean.

Nest is a triumph of ambient music, and though we might not expect anything less, it’s another quiet jewel in the crown of an artist whose work has given me great comfort and pleasure. Follow my example and acquire this album.

Make Your Own Taste, 27 April 2013 – makeyourowntaste.wordpress.com