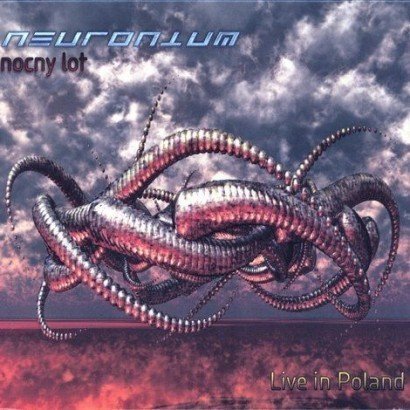 Nocny Lot is a superb cosmic ambient album which is the perfect balance between dark atmospheres, ambient rhythms and sweet morphic melodies.

Slow synth layers float idly and interlace languishingly in a dense anesthetic mosaic tickled by prismic dusts of which the fascinating carillons illuminate the endless harmonies of a synth with a very poignant musical prose. Around 40 albums and 36 years after Quasar 2C361, the magic Neuronium is always there, always so effective.

Recorded during the Gorlice 15th festival of ambient music in Poland on July 2013, Nocny Lot (Night Flight) is a jewel of ambient cosmic music. A sophisticated music where Michel Huygen confirms his ascendancy for the kind by melting marvelously the esoteric approach of the most beautiful years of Kitaro, the gloomy philharmonic touch of Vangelis and the dark ambiences of Tangerine Dream. The synths on Nocny Lot coo like some astral whales while the Mellotron produces benches of smoke of ether which wraps our senses. These slow morphic sighs are caressing the soft intro of Ethereal Journey with a multitude of sibylline breezes while that mislaid sequences try to forge a rhythm beneath the soft chants of a symphonic synth and the abstruse breaths of a chthonian choir. Synths are superb and harmonize twisted solos of which the somber allegorical singings encircle a shape of rhythm which oscillates furtively. Between the lethal ambiences and this uncertain rhythm, and its sequences which skip as if they danced on a lake of fire, this intro of Ethereal Journey sets the table to more than 100 minutes of pure Neuronium magic. These ambiences are sublimely morphic but also stunningly musical with superb melodies weaved by gloomy synths whose melancholy is admirably depicted with sibylline envelopes which fit perfectly in this fascinating choir of electronic mermaids.

The use of Mellotron on Nocny Lot abounds and Michel Hugyen, who is passed master in the art, in giving to it a vampiric size by making it as much crying than sing. And its elongated philharmonic impetus are drawing some slow strata which get loose and get entangle inside this neurasthenic opacity whose dread are mellifluously fed by very effective lines of bass. A first portion of rhythm can be heard through the seraphic singings of synths a little before the 9th minute point. Sequences twitter of their organic-industrial tones in a dense drizzle of ether. These chirpings skip awkwardly in the shadows of bass pulsations and the discreet singings of an enchanted flute. The symbiosis between this dark rhythm and the morphic ambiences is total. The flute reigns in master a little after the 17th minute. Chasing away the last jolts of the rhythm, she joins her oneiric chants to a splendid astral choir. And this pair tries to put to sleep the last fragments of a secret rhythm which is dying of its last jolts. But another line of sequences is hidden in the black and made drum its keys more insistently while Ethereal Journey embraces its psychotronic phase with a spiraled and bewitching ambient rhythm. Voices, flutes, industrial and cosmic noises, heavy coat of ether and plentiful anesthetic fogs encircle the slow beatings of a superb cosmic down-tempo while that quite slowly Ethereal Journey adrift towards a finale which is going to make your backbone tremble. Never an ambient music will have been so harmonious and touching. Simply splendid!

Split into 3 parts divided by 2 encores, Distant Worlds on Nocny Lot proposes a clearly more ambient, floating and darker approach. Michel Huygen becomes the architect of an intense ambient structure by stacking wide benches of fogs coated by ether which float in the countercurrents of a synth and its sibylline lines and choirs. It’s very dark and mysterious with a fascinating Berber touch which covers the muffled pulsations of an invisible rhythm. As the beatings of a heart bathed in a thick black blood. The encores offer two delicate cosmic lullabies with chords finely pinched by a kind of cosmic harp which sing in the delicate harmonies of a synth and of its philharmonic perfumes.

It’s a whole pleasure to renew with the music of Neuronium. Always so discreet and very retiring, Captain Michel Huygen maintains the Neuronium adventure in the highest spheres of the contemporary EM since almost 40 years. This unique sound and its psychotronic perfumes knew how to resist to the wear of time. Thus we hear Nocny Lot with the same fascination as we discovered the magnetizing Quasar 2C361 in 1977. And it’s the Neuronium magic. Michel Huygen knew how to adapt himself to the whims of technical and technological evolutions by composing an EM always soaked with soft fragrances of ether but with a harmonious approach which follows the curves of time. This is what we get with Nocny Lot which is the perfect balance between dark atmospheres, ambient rhythms and morphic melodies. It’s a splendid album which contains one of the most beautiful pearls that I heard recently in Ethereal Journey. Epic and moving, at the very image of Neuronium and Michel Huygen.

Since Youtube doesn’t offer a video of Nocny Lot – Live In Poland yet, watch Flying Over Kai-Tak (Part One And Part Two) from the Neuronium album Digital Dream (1980).