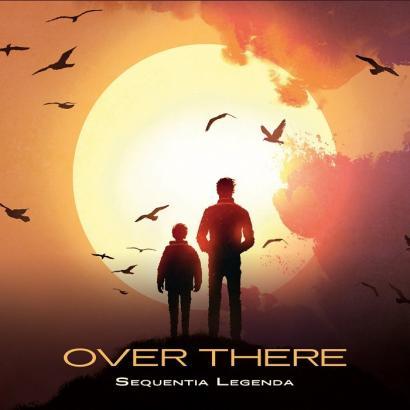 Sequentia Legenda — Over There Tracklist:

Over There is a stunning Berlin School album, that forges with a splendid sequencing work from Sequentia Legenda.

With perseverance and a very classical vision of the Berlin School, period Mirage, Sequentia Legenda has managed to climb among the most beautiful discoveries of the modern EM with 3 albums of an eloquent sonic poetry. Then came the very amazing Renaissance last year! Originally conceived in the 80’s, OVER THERE took almost 35 years to land on Compact Disc. I don’t know all the secrets and legends of my dear friend Laurent Schieber, but I know that he has an exceptional talent in marketing. So, the story of OVER THERE is walking on different websites and stretches over different times.

Sequentia Legenda started this musical journey with some analog instruments and finishes it with virtual ones adapted with analog tones. Honestly, I didn’t really hear analog tones on OVER THERE, except for Tommy Betzler on drums. On the other hand, I heard an impressive work of the sequencer, which sounds like the dawn of the MIDI time but with a bank of tones much larger, in 3 very fiery title that recall all the talent and know-how that Laurent has developed since Blue Dream in 2015.

The tracks of Over There

“The Return” begins with on the hats of wheels! Some arpeggios flutter without power in an environment without sounds, except that the echo of an empty space. A very Berliner bass line, like the heavy one which rises constantly, whips up these arpeggios that stick to it. They are structuring these vertiginous rhythms that roll and run like a train without destination. A train crisscrossing the sound plains as evidenced by these zigzags not too certain that roll like snakes. In short, a solid and fierce pace. All around is a mass of arpeggios that twinkle and twirl with their tones of crystal beads.

Percussions enter in the beat. We notice them later, like these layers of mists and orchestrations which are tracing the wavy structures of atmospheres in the background of “The Return”. Also, the use of electronic percussion adds more panache to the rhythms of Sequentia Legenda in this OVER THERE. The dexterity of the French musician at this level brings subtle modulations that are done gently. Here, as on the other two tracks of this album.

The 27 minutes of “The Return” are quite exquisite. If the layers of mists and of chthonic voices are known elements, the percussive elements, which dance the tap here and there, are nice surprises that thwart any attempt by the listener to doze in an effect of redundancy. If the percussion and the bass line are contagious, the arpeggios that vibrate all around this rhythmic framework burst with vivacity and velocity with effects of white noises and sometimes of organic noises which trace luminous metallic hoops all around these multiple very attractive beats. It’s a solid title where each new listening makes us discover another jewel well hidden behind the 27 minutes of “The Return”.

I had big expectations for “Floating Time”, especially because of the presence of Tommy Betzler on drums. But the real star of this title is none other than Laurent Schieber on sequencer. The title begins slowly with an arpeggio rodeo that follows a spasmodic spiral. A tone of diamond sounds bursts with a pure clarity behind each note of the sequencer. And this string of lustered keys in crystal glass of Arque borrows various tortuous and semi-tortuous paths. They are accentuating the cadence as throwing a little of ballast before releasing impetuous ardor throughout its sonic course. The ambiences in the background consists of veils of mist and of chthonic voices.

The velocity of the serial dances follows its attractive tonal path as the background intensifies its presence with more opacity as well as the beginning of Tommy Betzler’s work. There is intensity and drama in this approach that reaches another emotional level around the 11th minute. One observes the fascinating convulsive dance of arpeggios which adopts an unsuspecting melodious approach while the drums are running wild by hammering a heavy and slow rhythm which goes clearly against the hard work, and the word is weak, from the sequencer. The fight is uneven and the union of all these elements converge on a musical mass that is heavy and whose sequencer is the sole owner, even with the clubbing of Tommy Betzler on the kegs.

The music of Sequentia Legenda and of Klaus Schulze is often mentioned. If the first two titles of OVER THERE let filter a more personal signature from Laurent Schieber, “Mind Lake” is no doubt as to its source of inspiration that sticks this time to albums such as Dreams, En=Trance and Inter*Face. Here again the work of the sequencer forges a steady pace which circulates inside corridors filled of a sordid atmosphere. Layers of extinct voices and of Mephistophelic mist are responsible for these atmospheres while the rhythm is catchy and gets even more with the arrival of the electronic percussions. A very good title which concludes a fascinating and oh so excellent album from an artist who deserves all of his commercial hype on the great wild Web!

Where to buy the album?

You will find Over There on the Sequentia Legenda Bandcamp page here.