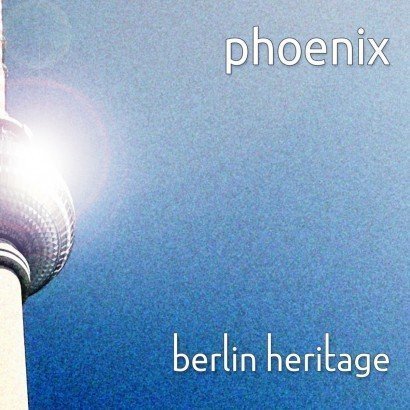 “Phoenix” is yet another wonderful album from Berlin Heritage filled by these psychedelic cosmic moods of the 70’s.

“Land of the Rising Sun” had been a beautiful surprise in the field of the unexpected in 2012. The fans of Berlin School, mainly the Klaus Schulze era, had full ears with a symphony of music, rhythms and ambiences sprinkled with dusts of stars and fed by electronic effects to make daydream the ears well screwed at our loudspeakers. “Phoenix” is made in the same mold!

A breeze extricates itself from the depths of the cosmos. Its hollow and sinuous breath drags dust of stars which whistle in our ears like a sibylline singing emanating from oblivion. Its shadow gets loose and infuses an analog heat with a slow movement of bass which intertwines the abstruse singings. Both entities harmonize their undulate breaths, shaking prismic particles which put together a series of keys skipping into fine circular movements. It’s a kind of rhythmic halos which go and come such as strands trying to run away. The bass line flushes out a structure of jerky pulsations while some electronic percussions invite each other, structuring so a kind of rhythmic ride which beats under the delicate kicks of the harmonious sequences. Elytrons to the felted jingles, cosmic gases, brief stroboscopic jerks and nervous percussions establish the bases of this stunning rhythmic approach which will shake the 24 minutes of “Leaving Behind”. If the rhythm is very livened up, it remains static. Pounding in all directions, it keeps a minimalist direction which twins its pulsations at this delicious string of sequences and its indefatigable oneiric song which returns ceaselessly in a hallucinating sound decoration clouded of prismic fog and set by magnificent solos which will make the fans of vintage EM to daydream. Solos! They are wonderful. They sing and also weave beautiful earworms, just like the sequencing. They make spirals and twists, sometimes acute, they cut out the cosmic atmospheres and they cross a structure of rhythm which remains subdivided by the very harmonious approach of its sequences.

“Leaving Behind” on this “Phoenix” is a splendid starting signal which will bring a little shade in the next 40 minutes of “Phoenix” so much it is powerfully appealing. Clearly quieter, even very ambient, the structure of “Somewhere in Between” reminds to me constantly that of Klaus Schulze in Body Love. Wandering choruses fill its introduction. They hum in a dense astral fog from where pop out delicate sequences of which the purpose is to weave rhythm as discreet as very ambient. We dream. And we let ourselves being deported in the vintages territories with this delicious movement of sequences which call out so much to the ambient works of Schulze. Little by little, “Somewhere in Between” covers itself with a more opaque veil where we discern a little less the sequences, but where we hear subtle synth solos that will make you daydream in an intense astral soundscape. With “Welcome to the New”, Robert Sigmuntowski wants to weave a link between vintage Berlin School and a more contemporary one. Cracklings of old vinyl are decorating an intro seized by heavy and overwhelming organ layers. The movement is very ambient, even floating, with a fascinating choir and its sibylline singing which fit closely to the delicate implosions and the slow impulses of the ghostly layers. I’m hearing Adelbert Von Deyen! A line of starry prisms sparkle like chirpings of birds and a fine movement of sequences shake its keys which spin in a circular choreography. The bass line regurgitates the pulsations which it held in secret, while the structure of “Welcome to the New” rhythm spreads its long undulatory skeleton which adopts a bit the movement of “Leaving Behind”. This is getting striking! Moreover, this second part of “Welcome to the New” is as much delicious as the opening of “Phoenix”. The sequences are harmonious and weave a hypnotizing earworm. They sparkle brightly in this immense opacity of ochred mist which feeds and weighs down the moods of “Phoenix”. The synth solos of have difficulty in highlighting their acutenesses, dividing their acrobatic singings in more nuanced tints and others more pearled.

Berlin Heritage bears its name marvelously. I adored “Phoenix”. It is an album tailored for the fans of Berlin School, as retro as contemporary, but with a clear tendency for the golden years of the psychedelic-cosmic EM. If you like long minimalists structure, if you like a sensible balance between the morphic moods and the intensely jerky rhythms, the sequences which sparkle of harmonious rhythms and solos as discreet as sharps; I strongly recommend you this “Phoenix” from Berlin Heritage.