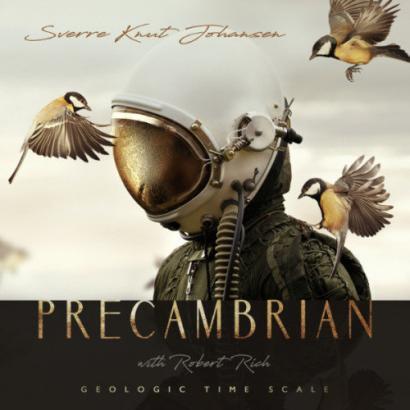 You can hear the whole story in one song, from the lonely to the triumphant, a portrail of creation. A meditation on the story of life on Earth is an ambitious undertaking. Perhaps only the language of synthesizers is complex enough to handle it all. There are no exploding volcanoes or roaring dinosaurs. We only hear the beautiful evolution of ideas expressed in musical forms, from the sound of simple swirling mystery, to life changing and dancing into increasingly sophisticated forms. The natural sounds of trickling water and a few supersonic aircraft in the distance are realistically expressed, everything else is purely electronic. This is music for thinking about creation, certainly not a narrative explaining the Big Bang Theory. What you will hear is a meditation.

Precambrian is an ambitious project, and it works. The very notion of a soundtrack to the story of life on Earth is rather aspirational, from the gradual gathering of the earliest cosmic dust forming the planets, all the way through the various times of flourishing terrestrial life forms that all met with a cataclysm and most creatures died, with a few living and starting over, again and again. I think that the album somehow actually keeps up with the pace needed to cover over 4 billion years in eight songs.

The album’s cover art, titled “Dreamers and Warriors,” is by photographer Martin Stranka, an international award-winning Czech photographer. The cover shows some birds attracted to an old looking classic 1950-1960s era space suit, something developed for a jet pilot, adapted for outer space conditions, with a flame-resistant body and a helmet with a dark mirror visor. 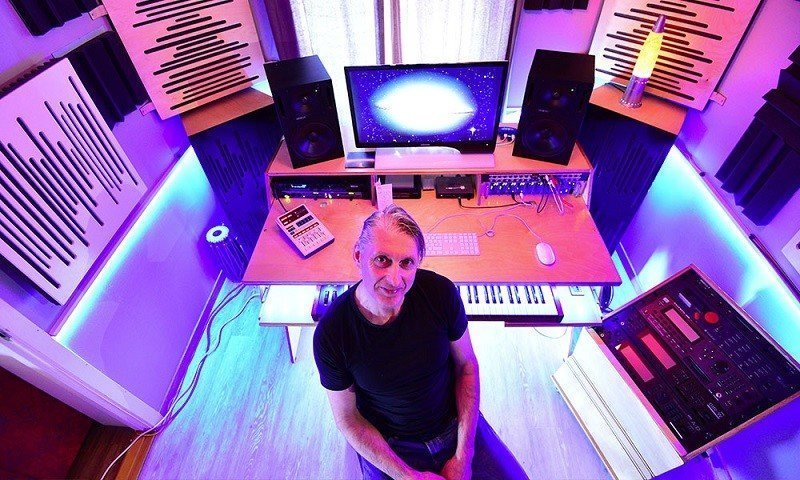 What you will hear is electronic classical music. You can listen to it as a background for imagining the story of life on earth, from microbes through dinosaurs and then to our Anthropocenic era. This can be a controversial topic but relax because not a single word is spoken or sung on the album, so that leaves only musical imagination. This ambient electronic adventure succeeds because it is always changing while keeping a strong direction. Also, it includes plenty of natural recordings woven into the synthesizer orchestra. The concept of such vast amounts of time is perfectly suited for electronic music. Things build up and then change, sometimes it gets very quiet, first as simple organisms with the power of photosynthesis create oxygen, changing the atmosphere slowly.

Millions of years go by. There is oxygen and lush green forests, which lead to the times when dinosaurs were the most dominant species. All those dinosaurs are gone now, only the fossils remain. Perhaps most everything from those times are gone, except for birds and the oxygen. While listening I enjoyed looking up the strange names scientists use for describing their various versions of creation. Like pretty much every kid, I like pictures of dinosaurs and fossils and musing over various depictions of all the different popular creation beliefs. I have some favorites; creation beliefs are very important.

The artists and Spotted Peccary Music

Consistently the mood on Precambrian is peaceful and meditative, nothing too busy or agitating. This all took a long time, you will not hear a “hurry up” on this album. The palette of sound is fantastic. The artists are Sverre Knut Johansen of Norway, and Robert Rich, an American artist currently living in the Bay Area. David Helpling added some guitar textures, too. Johansen started making recordings of his music in 1994, his first album was produced by Erik Wøllo. Currently Johansen has several albums on the Spotted Peccary Music label, including “The Vast Expanse”, “Secret Space Program”, “Earth From Above”, and now “Precambrian”.

2. The tracks of Precambrian

Hadean means “hades,” with the fire and brimstone, in the darkness, whirling about in outer space, dust coming together to make a series of planets. There is no water. Overall this is a spooky quiet song. At the beginning there is a distant explosion, with some remote reverberating rumbling and tumbling in space, spooky whistles, swirling in blackness. This all takes place before there was life. The sound is calm and expansive, poetic in nature, orderly, certainly not chaotic or explosive as one might otherwise imagine these volcanic primal times to sound. It grooves.

Archean means “ancient life” and now there is water on the Earth, held in place by mysterious forces we now call gravity. The oldest forms of new life could have come about in the protection of deep water, so this is all activity in the ocean. Dawn in a strange place, a changing light as the planets move around the sun, slow water music, trickling and bubbling sounds and quiet synth horns. The opening soon develops into a funky pulse. There is no significant life yet on the planet, but I can hear the electronic space frogs who boogie towards the end of this track.

Proterozoic means “former life.” From the quiet water come drips at first, and a hand drum sounds in the swirling synthesizer zephyrs, whistles developing slowly into a beat that could be like a heartbeat, a hand drum with synthesizer, whirling in space where things change and the beat sustains. I hear some natural sounds of a thunderstorm with winds, and synthetic strings that give the music an elegant glow as the earliest forms of life emerge, skittering and twittering small creatures calling to each other, calling across time to our present now.

It gets quiet and there are wet sounds maybe some whales, slowly a return of the fluttering drums heartbeat and a little thunderstorm, dripping sounds. It ends with trickling water as single cells congregate to dance and create oxygen from sunshine, and after thousands of years they create enough oxygen to bring about the ideal circumstances for the new oxygen breathing life forms to come.

Paleozoic means “ancient life” and I hear slow whistling synthesizer sounds and bird calls, both real and imagined, piano and synthesizer, a little trickling water, slow beautiful moments with a melodic framework. Some sparse percussive accents. There is a wet jungle sound with birds as the song progresses. The Paleozoic Era was a time of dramatic geological, climatic and evolutionary change.

Mesozoic means “middle life” and this track begins as bird songs mix with trickling water, a little thunder, all within the synthesizer rainforest. This is the time of flourishing pine forests and dinosaurs; gigantic dinosaurs were the dominant creatures. Pretty much all else was their food. There was so much life, large populations of creatures, endless forests, and things were going really well. Then one day some meteors hit the earth and the dust caused the temperature to drop and snow covered the earth, killing most life. The sound on this track includes soaring tones, constantly changing, little synthesizer accents, some sounds of water squishing. In the music there is expectation and no gravity. We are floating in many dimensions perhaps under water, and at times with large creatures, or otherwise at a great height.

Cenozoic means “new animal” and now this includes humans, with music for a slow ceremonial walk. Synthesizer melodies and majestic layers, there are always birds sprinkled in, one or two at a time. They come and go. Hear a melody that is timeless with swirling overhead and little hints of fuzzy buzzing life forms underfoot, in the distance the birds sing and cry. A slow grand processional takes shape, feeling calm, experiencing endless enduring steps repeating the story of change, using piano and synthesizer with a few more birds, eventually emerging is an ethereal electronic background singer and then what sounds to me like flocks of water birds feeding. But they might not be birds.

In this track, the abstract sounds of human activity dominate the environment, influencing the water, land and air. I hear surf crashing blending into the modern sound of jets that roar in the distance overhead. The layers include hand drums and oddly dancing electronic echoes. The smell of burning has been fairly constant on Earth, from the beginning. Now it has a petrochemical aroma. This tune has a beat that fades at times but is consistent through the track. The melody plays, and synthesizer versions of feathered serpents are coiling overhead. Meanwhile the beat stays behind the scene and at times the music fades and almost stops but then it slowly rebuilds. There is always the sound of birds calling and water flowing.

This is the climax of the album Precambrian. The title track that tells the whole story and covers hundreds of millions of years, all the way to the present time. One of the subplots of this wordless opera is the Cambrian Explosion, perhaps the most exciting episode. Like the whole album, the feeling is of a slow string synthesizer at dawn with soaring tones and a wide variety of imaginative little surprises worked into the flow. Early in the track I thought about the movement of seaweed underwater, being pulled slowly back and forth by the pulsing swells.

The music changes and rises into the air with sparkling and twittering, a building a tempo emerges with a melody, some drama, some percussion, a harp with an ethereal voice singing. This is the longest track on the album. Complex life forms begin to appear, find their way, flourish, and then eventually fade, so the music starts with simple swirling and develops into a full pulsing range of electronic symphonics. The word Cambrian, which is the root of the title of the album, came to be used for this long and complex period of the history of the planet because the earliest scholars were working in Cambridge, England.

3. Where to buy Precambrian?

The release date is set for May 24, 2019. You can buy Precambrian at the store of Spotted Peccary Music and Bandcamp.