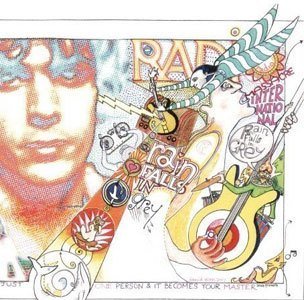 RADIO MASSACRE INTERNATIONAL (RMI from now on) is an English outfit whose existence began in 1994, though all three of the members have been playing together since 1979, previously under the moniker of DAS. The band’s general discography contains about 30 releases, and since this is my first encounter with their work, I’d better not go beyond the fact that “Rain Falls in Grey” is their latest studio album and is dedicated to the memory of Syd Barrett, a genius who opened doors into parallel musical worlds, having in a way sacrificed his sanity in the process of his discovery.

I don’t really know why, but prior to listening to the album Rain Falls In Grey, I was almost sure that its primary instruments would be guitars, bass and drums. In reality, however, each of the trio’s members indeed actively plays keyboards also, additionally widely deploying electronics. Besides, on three of the disc’s seven tracks the band is backed up by Martin Archer, who appears to be quite an energetic as well as resourceful reed player. (Whereas the contribution of the other guest musician, whose name you can see in the lineup above, is insignificant.) All in all, quite a substantial part of the recording’s sonic palette has a saturation that‘s associated with a quintet’s performance, partly owing to the musicians’ efficient use of studio possibilities, of course. Now I’d like to mention that the group plays with passion everywhere they really play or, to put it more precisely, I find their music to be both much more spirited and compelling within the arrangements dominated by real instruments, and fortunately those are prevalent on the majority of compositions, the relatively short Shut Up being the only exception to this rule.

That being said, RMI are too generous in utilizing effects here: by means of electronic devices as well as compressor, delay and so on pedals-units – in combination with some specific techniques in eliciting sounds from their real instruments. I don’t find any sense of purpose in these manipulations, and only the presence of Mellotron saves Shut Up from falling completely into the category of so-called “sound design”. Not my cup of tea. The rest of the material can generally be defined as psychedelic Space Fusion with a couple of reservations regarding the latter term: there are plenty of rock improvisations, plus a number of semi-random, semi-well-ordered, well, impromptus (mainly on the part of the synthesizers – the essence of Escapade’s work), but comparatively few jazz ones, almost all of those belonging to the reed player’s department. Pink Floyd is the main influence here, the short presumably eponymous guitar-driven rocker Syd sounding in many ways like a tribute to the immortal classic Astronomy Domine and so its creator also. Revealing a lot of dynamic and structural contrasts as well as some mind-blowing interplays between guitar and organ, the ‘sidelong’ title track and the semi-epic Emissary both find the band much closer to approaching the seminal style of the aforementioned British legend’s first deep space-rock explorations. Both are to a certain degree reminiscent of a cross between Interstellar Overdrive and Astronomy Domine again, though during their sax-driven movements the music can suggest at once mid-‘70s Pink Floyd and Hawkwind, Archer’s wilder saxophone trills bringing to mind the name of Nik Turner.

Legacy and Far Away each leaves a strong impression of being a sequel to Emissary and Rain Falls in Grey, respectively, yet none come across as resembling Syd Barrett’s creations, perhaps because their arrangements are slow throughout and are almost completely structured. The first of these, featuring reeds, steers towards the more reflective side of “Dark Side of the Moon”, whilst the latter piece, filled with a sense of sorrow, echoes the first half of Shine on You Crazy Diamond, Part One, from “Wish You Were Here” for sure. The second longest track, Bettr’r Day-s (probably the richest in Mellotron patterns), reveals some effective transitions and is generally just a bit inferior to both of the disc’s highlights. Free of any hard designs, it reminds me more often of Echoes from “Meddle”, at times at its most hypnotic, though there are also moments in which, while listening to, I can easily imagine Djam Karet or even Ozric Tentacles, just using vintage keyboards besides modern ones.

With two attentive listenings to this Rain Falls In Grey behind me, I must admit RMI impresses me to a much greater extent when they’re making a big space-rock sound (regardless of whether it’s imbued with eclecticism or not, such as on Syd) than when they merely drift, which, not counting their ‘design’ effort, they do throughout the disc’s last quarter. Overall, however, the band’s thorough knowledge of the past should be appreciated, even though it is a kind of hermetic science (not to be confused with the medieval discipline). RMI have managed to plunge into the early days of Pink Floyd without using a time machine and perfectly reproduced the distinctive aura of those first psychedelic experiments. Take “Rain Falls in Grey” as it is, as a journey into the epoch of the rise of Progressive, and you’ll certainly find it to be fascinating.