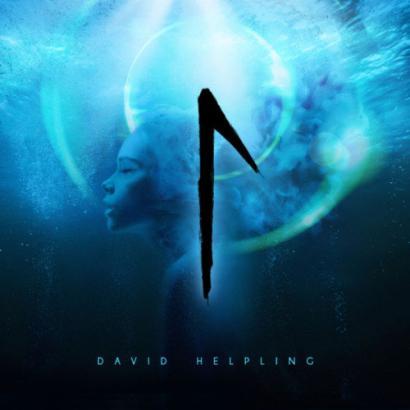 With Rune the man takes us to previously unencountered new places. Many of them are under the sea. Some places we can visit with him, are in unknown and extraordinary zones or regions of a universe previously hidden. A universe where dwell huge slow curious creatures I have never seen before. A universe with gigantic celestial whales and places where shimmering colors progress through rainbows of delight for the ears. Only one man can unlock those doors, only one man can interpret the script to lead us on this journey. Only one man can take us through the hall of mirrors, on infinite and harmonious clouds, and bring us safely back. That man is David Helpling. The mysterious angular characters contain hidden meanings that are what we are about to listen to, under the title of Rune. Close your eyes and open wide your ear goggles.

1. About the album Rune

Even as a teen…

…David Helpling always experimented with various effects and signal processors to create his fantastic illusions of sound and wonder. Together with his passion for synthesizers and fingertip nimble percussion, this guitar sound solidified his unmistakable vision and musical courage. Now we can rely on his magical abilities to again try to interpret the Runes.

Runes are historically the letters in a set of related alphabets from what is now Northern Europe. They are very distant and different from the fabled Egyptian Hieroglyphics, but somehow performing a similar type of task, suggesting the use of symbols for representing ideas. Runology is a word used to speak of the study of the runic alphabets, runic inscriptions, runestones, and their legendary powers of transmission between our present and distant futures and pasts. The three best-known runic alphabets are the Elder Futhark, coming to us from around 150–00 AD, the Anglo-Saxon Futhorc, which brings us back to the period now measured to be about 400–100 AD, and the Younger Futhark of 800–100 AD. With this new music we can see these strange and unlimited new worlds in our headphones and personal sound systems.

I had the favorable chance to…

…ask David Helpling about this newest album Rune, and about his musical process. Here is some of what he said. “Chasing the Ambient Guitar dream is a big one, but I also absolutely love working with synthesizers and samplers. I create a lot of my own tones and patches on analog and digital synthesizers and have a lot of fun with some of my favorite virtual synths “in the box.” I love recording things here in the studio and creating my own sampled instruments. Also, I sample quite a bit of my own guitar textures and have a rather serious library of all that stuff too.

I like “playing” things. I’m not a sequencer guy or a button pusher. So, the real magic happens in creating my own instruments that are super expressive and playable from a MIDI controller. When I’m a bit burnt from working, I’ll spend a day or two just going deep in production on some new sounds that really get me inspired. Having personal and special new virtual instruments to express with is often where the wonder and excitement comes from in my new stuff.”

…”I really am mostly a recording artist and not a performer. I absolutely love being in the studio. The process of recording and geeking out on everything is still just as enthralling as it ever was. I have a studio space designed around all of the things I love, and I change things around often enough to keep it feeling fresh.”

I asked him about the origins of Rune, and if there is a Viking connection to the spirits of the sound he is creating here, “The connection isn’t ‘Viking’ as much as it is Norse. In that, the meaning and concept of the Norse Ocean Rune is the DNA of this record. I am fascinated by cultural mythologies, but Norse is the most wondrous to me. It is powerfully fantastical and just plain impressive. Without going crazy-deep here, Laguz is the “Ocean Rune” which first appeared in Denmark and Norway around 160 CE (160 years before Year 1). In simple form it means both Ocean & Collective Memory, which under the Rune are the same thing.

To the Norse, water is the symbol of unconscious and invisible life forces. It represents the Universal Ocean, the supreme unity of all life: past, present and future and of the unconscious context of becoming or the evolutionary process. It also represented the wild forces of the ocean, which if not respected could lead to destruction and death. This is epic and heavy stuff that I resonate with directly. It inspires me to no end.”

A whirlpool opens up and…

…we submerge, accompanied only by the sensation is of a ringing bell and vertigo, “Free Dive” (7:25) begins our journey, with melodies that take shape and spin into the void, layers build up but the atmosphere stays open with a feeling of motion in deep space. Now slow it down, “Glass” (10:06) describes a place where things are still, and eternity is frozen. Gliding in deeper waters, looking up, behold the “Ascension of the Whales” (5:37) seen in the distance.

Some mysteries are probably not required to be interpreted perfectly to be effective, “The Black Rock” (8:58) comes from a calm place but I postulate that there is a connection between the past and the future hidden in this monument, a mind bending trek through space and time. It just is.

Rising and gaining power, “Be” (6:00) has the feeling of breaking free of gravity and finding a new path towards the sun. Now, imagine looking up at the world from beneath the water, from where the fish view the boats, the islands, and the sky. “Under Shallow Seas” (10:02) has a rushing feeling, familiar things are not entirely viewed in the same way down here.

Glowing and mysterious, coasting towards the twilight, we come to the “Isle in Half Light” (8:44) to ponder the mysteries discovered and not quite explained, but content with having made the voyage. To close the journey, a prayer to the ancient future, “The Heart of Us” (11:00) slowly unfolds, allowing further consideration and interpretation. Float in wonder.

I asked David Helpling about…

…his journey as a musician, he has some insights to share about his work, including some connections to the ocean. “I need to be by the ocean, and I spend a lot of time in the water. I was born and raised a few blocks from the ocean and spent most of my time there. You are at the edge of the world staring at the vastest ocean and when you are in the water you are physically and electrically connected to everything. It is the ultimate grounding. I’ve been chasing down a sort of magical guitar sound since I first picked up the instrument. It’s difficult to explain, but there is a specific color, modulation and space that I am absolutely in love with. This sound has evolved a bit but has always been a part of my records going back to my first – Between Green and Blue.

In the midst of a hiatus from guitar work, I was called back to it strongly. So, I got all geeky and built a new hardware-based rig just for Ambient Guitar work that I love playing with. I decided to promise myself to create a new piece of guitar music every Sunday and post it to my YouTube channel – forcing me to record and keep creating. The visuals were water-themed and from both my own ocean travels and the incredible cinematography of my friend Shawn Malone – she is amazing. “

The symbol on the cover is…

…called Laguz, meaning water, or lake, or ocean, or waterfall. The cover picture is of a sea nymph and some beautiful greenish-blue water, mysterious and deep. The angular shapes of the runes are shared with most contemporary alphabets of the period and were carved in wood or stone. There are no horizontal strokes, if you have ever tried to do so, when carving a message on a flat staff or stick, it would be along the grain, thus rendering it both less legible and more likely to split the wood.

Some scholars say that the earliest inscriptions of the 2nd and 3rd centuries, found in bogs and graves around Jutland (now called the Vimose inscriptions), exhibit strange and unpronounceable word endings that are considered unresolved. Listen carefully to understand the Runes of David Helpling. You will be rewarded by the wonders emanating from his hall of mirrors.

One last quote to ponder from the intrepid maestro, “Making your own music and producing your own records is like being in your own fantasy film where you are both the creator of the space and an inspired viewer of what unfolds. If you approach every idea this way, the music will be stunning, original and you will feel fulfilled by the process, even before you share the creation with your listeners.”