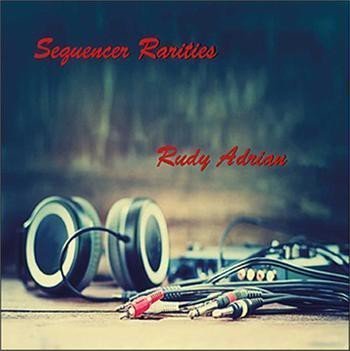 Sequencer Rarities is certainly the best of Rudy’s Sequencer Sketches adventures and an inescapable for all the fans of sequencer-based style EM, like this good old Berlin School.

A humming is seizing our ears…

…of its slow agony. The same ears hear prisms singing whereas the vibration unties a more ethereal sound thread where we can even feel voices humming between our ears. A slight pulsation turns up. Hopping as in a rodeo without a way out, the structure of “Sisters” invites then some percussions and other percussive effects to join this harmonious movement of which the jerks tear up a bag of cosmic elements. Soft and floating, the rhythmic structure of “Sisters” pours nevertheless against other percussive elements and more crystal-clear dominating sequences, so giving a more detailed dimension to this title that Rudy Adrian composed in 1998 for his Twilight album.

Par Avion – Sequencer Sketches Vol. 4, realized by Groove in 2007 was the last fiesta of sequenced rhythms that the New Zealand synthesist offered to the Berlin School aficionados. And still there, our friend Rudy found a way to insert a lot of ambient phases which had diluted a little the vision of his suite of Sequencer Sketches albums.

…of an EM which flirts between the borders of the Belin School and the melodious sequenced approaches of the Netherlands School, “Sequencer Rarities” is a mine of sequences which confront and melt together in epic fights where the rhythms and the melodies are not doing any winner, otherwise the audiophile. Although written between various periods, the music here flows like a long river of ambient, melodic and lively rhythms which Ron Boots has polished up with his usual dexterity. “Solar Flares” is thus following the path with the somber lost breezes of “Sisters”. Layers of voice and of effects lay down a tide of melancholy whereas are tinkling in the background some reserved chords.

The rhythm arises from these sequenced rhythmic matrices of the 70’s. More specifically the era of Tangerine Dream with Franke and Baumann on board as well as Froese and his mythical harmonious solos which liquefy in strange caramelized mist. The melodious approach unique to the style of Adrian completes this delicious music composed at the time of Concerts in the USA, back in 2003. Knocks of reams in the water and a wide veil of opalescent sounds substance, “Kinetic Flow” proposes a nice introduction of melancholic vibes with a very Vangelis synth which scatters its gloom such as a saxophonist and his bruised soul lonely at midnight. Written at the same time of the album of the same name in on 2000, “Kinetic Flow” is the only title which has already appeared officially in an album of compilations from the British monthly magazine Sequences.

The proposed structure is in the…

…pure Berlin School tradition with hypnotic sequences which skip such as in a potato bags races, with runners in shape all the same, where fluctuate synth solos under harmonious forms and where is also added another thine line of rhythmic sequences which is splashing of sound effects. This rhythm filled with oscillating loops overflows into structure “Blue Waves”, a title composed in 2005 but which strangely sounds very much like “Kinetic Flow”.

With its 23 minutes, “Wind in The Trees” is the most recent composition in “Sequencer Rarities”. In an approach semi improvised, a delicate piano dances with the sibylline synth waves which decorate its introduction. The melody is melancholic with strong notes which resound in this veil of effects of an astral blue. My old ears hear a seraphic choir, but they can be fooled as well by these lines which melt themselves in a harmonious continuity sculptured now by the synth. The sequences jostle these peaceful moments with a structure of rhythm which aims to be more and more in the kind of Phaedra.

…to this structure of ambient rhythm and which adopts nevertheless the pace of a train through cosmic plains and mountains, Rudy Adrian sprays abundantly the evolution of “Wind in The Trees” with good solos which are as much harmonious as free of any melodic contributions. I find many similarities between this title, which was written in 2007, and the structure of compositions in Par Avion – Sequencer Sketches Vol. 4, with the title Bavarian Eagle. No, it’s not Tubular Bells from Mike Oldfield, although the notes of piano which tinkle brightly in the opening of “Summers at Ruby Bay”, and nevertheless … The oldest of the compositions in “Sequencer Rarities”, “Summers at Ruby Bay” is this ideal title to explain the foundations of the minimalist music assisted by a sequencer.

The ghost ritornello of this brilliant melody of the English musician swirls over its 7 minutes, giving the necessary space for Rudy Adrian to annex on it a multitude of parallel and nearby lines, so creating an immense effect of Spirograph of which the hypnotic loops are besieged by various effects and other sequences which skip such as these graceful water dancers’ pairs of legs. Splendid and intrusive, “Summers at Ruby Bay” concludes a Rudy Adrian’s very solid album and certainly the best of his Sequencer Sketches adventures. An inescapable for all the fans of sequencer-based style EM, like this good old Berlin School.

You can buy the music of Rudy Adrian at the store of Groove Unlimited.