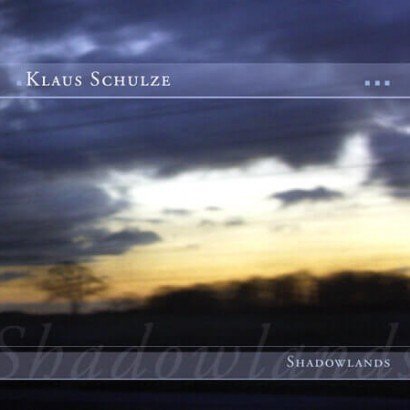 Here is an album that we…

…stopped to expect since months, if not years. There were several questioning and mysteries regarding Shadowlands. In 2011, one already spoke about a possible date for this 46th (yes yes, 46!) album of Klaus Schulze and then zip! Not a word, even a breath of news. And in the meanwhile, rumors! Rumors about the health of the German master of the minimalist symphonies sowed the concern among his fans, but also rumors in the effect that the squabble was boiling between Klaus Schulze and MIG (Made In Germany) which knew any sorts of difficulties with the publication of the last La Vie Electronique and especially Tonwelle.

And the rumors are spreading till the end of 2012 when a date is moved forward and finally moved back… In brief, it’s a dead end. And finally, Shadowlands lands in the trays in February 2013. That’s about 3 years (according to certain rumors which would be well-founded) after that Klaus Schulze had given his first knocks of strata on his new Roland Jupiter 80, weaving the beginnings of Shadowlands which arrives in 2 editions; one with a single cd and another in a limited edition of two cd for about 150 minutes of new music. Shadowlands sets up its musical grandeur on three or five, depending of your choice, long tracks of which the minimalist paths are skillfully orchestrated by the Master who adds constantly musical elements and fine variances to embellish all the hypnotic impact.

…and caress their harmonies in hibernation under diverse heterogeneous jingles. The rhythm on Shadowlands is pounding with keys which skip frantically to catch a more homogeneous rhythmic structure. The mood is stifling when the tears of Thomas Kagermann’s violin calm the heaviness, cherishing of its rosaceous complaints the panicky pulsations which skip always under those sinuous evasive lines. A voice is rising. A powerful and brief wind of male vocal cords diverts our attention whereas the rhythm, hypocritical, settles down. Resulting from a fusion of a splitting of tireless jumping keys, this rhythm takes the shape of a long hypnotic race where a runner, jogging in our imagination, has to by-pass various obstacles, diverting thus finely the course of a long minimalist rhythm that knocks of bass-drums, tabla kind of percussions and silvery cymbals decorate of fine variations. Melodies? They are mesmerizing.

Coming from a fusion between the tears of violins, the scattered flutes, the ethereal voices and cloistered rustles from Lisa Gerrard, Crysta Bell and Julia Messenger, on Shadowlands they float in the sweetnesses of a synth and of its soothing lines. These voices which haunt our ears throughout this slow agony of shadows reach peaking points, making “Shadowlights” topples over into poignant dimensions, like around the 15th minute when the percussions which fall and the roaring of angels energize a long track which amazes constantly by the address of Klaus Schulze to peppered his so very long structure of fine variations. And the more “Shadowlights” moves forward and the more Klaus Schulze modifies subtly its musicality.

The 2nd half is more aggressive…

…with arrangements drawn by hatched keyboards riffs which sound like fiddlestick and fatty chords which are waving such as dull spasms to tones a bit organic, moulding a strange approach of an ethereal funk on a half floating rhythm. The voices and violins are feasting in an incestuous merger, adding constantly elements of charm to this long minimalist track that Schulze manipulates in a masterly fashion, ignoring the traps and the probability of a possible boredom which watches for these long musical rivers that are the tracks of the kind of “Shadowlights”. Here are 41 good minutes that I never heard passed!

After a tortuous introduction where filets of astral voices kiss a rhythm which has difficulty in skipping, “In Between” on Shadowlands spreads the charm of its hesitation with its uncertain opening. Pleasant choirs of spectral mermaids sing the breaths of life and despair on a rippling bed of arpeggios to the gleaming tones. This mesmerizing dance of immobility shakes its torpor with discreet tabla percussions. And in the orgiastic breaths in seraphim voices “In Between” sparkles of its hardly perceptible skips, drawing the axes of a minimalist rhythm which finds its freshness in the modulations of the harmonies and in the imperfect circles of a stroboscopic line which swirls lazily in the background, such as a wizard and his dance of the infinity.

A bass line clasps this delicate…

…cerebral trance at around the 8th minute, giving more depth to a rhythm which becomes subtly groovier. And Schulze to continue to dress his minimalist rhythm of percussions to tones of maracas while that the stroboscopic line goes out of the anonymity to dance in eroded circles with these unchanging choirs which have fill the harmonies of “In Between” from which the percussions are escaping to resound with transparency on the beginning of “Licht und Schatten” which marries the same rhythmic rules as “In Between” but with an approach closer to the operas lost of Totentag.

The voices are very musical. Mixing feminine octaves to males’ ones, Schulze weaves the lines of a wild opera which sneaks into an impressive meshing of jerky arpeggios and percussions among which the tones and the strikings, as limpid as incisive, fall over to a mnemonic trance where from re-appears the distant memories of the very beautiful universe of Audentity. As in the opening track, these voices of nymphs caress a universe of musical nuances and introduce magical moments which amaze the senses and comfort our desire to let us bite by the teeth of Morpheus.

So ends the first act of Shadowlands

I savored every minute of it. And no! Klaus Schulze did not lose his creative touch. From the top of his 65 years he signs a work in the greatness of his serenity with minimalist movements that only he knows how to structure in order to avoid the traps of boredom. Everything is in the tone. The voices are superb. They float in harmonies of a sometimes discreet synth which avoids solos to concentrate better on these lamentations of nymphs which fly like what his solos should be. It’s soft, dreamlike and very melodious. Shadowlands is an album of the reason which shows all the greatness of a timeless man and of his creativity.