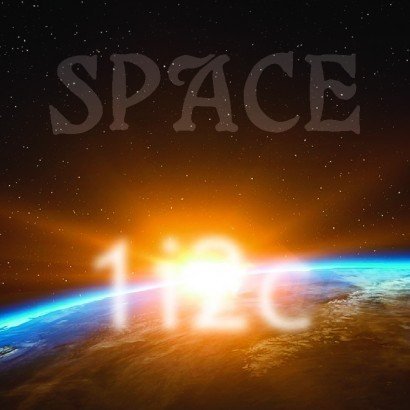 Space is a fine album. It is well produced, it is rich in tone and outlook and consistent in quality. 1i2c never over-reaches or over-eggs this particular pudding.

I wanted to check out this artist…

…having met him (in a virtual sense) in a Tangerine Dream specialist group on Facebook. So you will be able to fathom his influences right there.

Why review this music? It’s not currently present on a physical format (which is where I normally restrict my attentions), it’s one of a around a billion electronic excursions currently roaming the internet and surely the TD connection should set off a pastiche warning light?

There was something, though…

…an itch at the back of my neck? Some element of innocence that betrayed a wonder and a wide-eyed excitement? It could have been some or all of these things. I’ll tell you what it really was, though. Age. He’s not a spring chicken is 1i2c. He’s not a kid trying to make a noise after receiving a Korg for Khristmas and, like any ink on paper novelist who begins to write later in life, you really have to donate time to drinking in the art. Why? Because he’s lived life and should…should have something to say. Experience built up before music creation (any art creation, in fact) is, in my book a ‘good thing’.

Also, I have a thing for the early ambient LP, Space from the KLF (featuring The Orb…or bits of it).

…is split into seven tracks. Six are named Space with a text substrate in brackets plus Solar Energy – Mechanical Mix to round things off.

This newly released sonic excursion certainly sits on a chair with a Tangerine Dream label waggling from one of the legs, sure. What I’m happy to report, though, is that 1i2c is the guy sitting in it.

The album hits the floor in motion and rolls nicely from the off, easily reflecting its name in terms of spacial exploration and Tangerine Dream-like rhythmic building, rolling, forever rolling, tipping, cascading, falling and rolling again. This and the second track take the steady tempo route that sets a firm template and tone for the entire project. It smacks of confidence.

Which makes Space Part Three (Temporal Zone) a bit of a surprise. But I’ll leave that till later.

The album builds, dipping into…

…dramatic and bold, sweeping pieces of sonic canvas with sonic oils splashed all over them. Synth-based grand gestures add gravitas to the mood until Space Part 6 lightens the mood a touch, adding a slice of commerciality and boogie rhythms to the album, adding to the ‘light and shade’.

This is a fine album. Well produced, rich in tone and outlook, consistent in quality, 1i2c never over-reaches or over-eggs this particular pudding.

The only technical or,…

…rather, arrangement problem I have with it is track three: Space Part Three (Temporal Zone). Because while the final track, Solar Energy, does provide a conclusion of sorts, Part Three is more than that. The tempo of this track increases and separates itself from anything else of this project. I hear flavours of Jean-Michel Jarre here but, mostly, I hear sheer, unadulterated joy. This is a celebratory piece. Dancing and twirling and skipping and laughing. It would have made a superb final conclusion to the album.

All musicians starting out are derivative – even The Beatles began that way – and so hearing flavours of legendary groups within this work is acceptable and expected. I hear the inner 1i2c here, yes, but I want to hear more of his voice coming through. His ideas. I want him to develop more of his own style and direction.

Tweak the track programming here and there and you’ve got yourself a cracking synth outing. There are plenty of peaks and moments of real rapture and bliss in this release. There’s also a measure of ‘world building’ here which is the greatest prog-like element that I can discover within any album (no matter what the genre). But don’t do it again, Mr 1i2c, move forwards, don’t rest. Explore, make mistakes, hit cul de sacs and hit the heights and enjoy the ‘Eureka!” moments. But don’t stand still.

You can buy the music of 1i2c on Bandcamp.