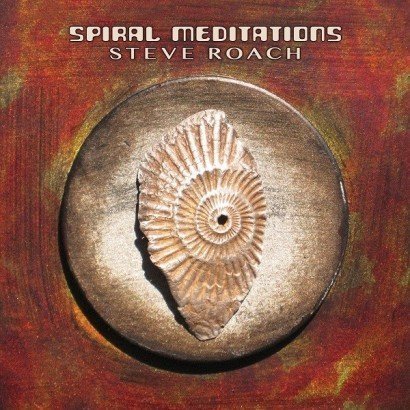 Spiral Meditations is another amazing voyage from Steve Roach in the lands of ambient, magnetizing rhythms and bewitching, meditative ambiences.

Imagine a spiral! A horizontal spiral which swirls in front of your eyes. Closed eyes which see a spiral and its circles livened up by multidimensional sound waves swirling as the blades of a helix which leave its blurred shades drawn hypnotic and ceaseless sonic circles of which the speed makes sparkled some reflections hatched like the lights of a big sound kaleidoscope. Now, imagine a wizard. A wizard of sounds who uses many psychedelic geometrical figures which swirl endlessly in order to take up your aura. You thus have Steve Roach. You also have all the background of Spiral Meditations.

We had a foretaste of this last Steve Roach’s album on the impressive collection Possibilities of Circumstance of the American label Projekt Records with Consumed by Sunlight and its ambient rhythm which meditates in the delicate sighs of a bass line and some chimed ringings. Little by little this rhythm livens up with fine percussions among which the light drumming, kind of manual thing, mutter with embarrassment in the ethereal singings of a floating synth. Finely, Consumed by Sunlight passes through towards a more swirling structure of rhythm. It’s the passage in the heart of the circular rhythms to the strong fragrances of hypnotic trance of Spiral Meditations. In an organic sonic envelope where gurgling and strange duck cackling decorate an ambient soundscape drawn by fine blades of synth, the rhythm of Sand Painting spins around with sound loops trapped in a fine meshing of percussions and sequences. We guess these Steve Roach’s tender attachments for the tribal rhythms with this background of rhythm which drowns itself in a perpetual mass of circles of which the shadows and doubles swirl at the speed of a hyperactive trance. We lend an attentive ear and we hear these structures of whirling sequences which filled the hypnotic infernal rhythms of Empetus. Except that here, the sound canvas on Spiral Meditations is so dense and so intrusive that we are stuck in a bewitching state of voluntary hypnosis. It’s a dance into a kind of pensive trance which is at the height of Steve Roach’s meditative visions.

The title-track on this Spiral Meditations brings us towards a more silky level with a multitude of wavelets which stream in an impressive repetitive pattern. In spite of a structure of rhythm which besieges the comfortable hypnotic sweetness of its undisciplined percussions, whom would fit pretty well on a disheveled rock structure, some organic jingles and a line of bass a little bit funky, Spiral Meditation charms the hearing with this gleaming sound texture which sings like a concert of cybernetic nightingales on the bases of a nervous and jerky rhythm. Lively and restful! Is it possible? The answer is in this mesmerizing album to the very soothing trances that is Spiral Meditations. Helix flies away solo with geometrical figures which spin as of indefatigable sonic shoelaces which refuse to tie the knots. Short and extremely musical, Helix has to be the bridge that links the cerebral rhythmic trance of Spiral Meditation to the soothing waters of the very beautiful and meditative Spiral Meditation Part Two which reminds me intensely Structures from Silence. Moreover what strikes the most on Spiral Meditations is this insurmountable perception of hearing Steve Roach’s cradles; from Now to Landmass while passing by Dynamic Stillness or The Magnificent Void. The Feeling Expands takes us back the road of the delicate rhythms and the hypnotic structures a bit chipped of Spiral Meditation while that Sustained in Light Soul returns us literally in the sonic landscapes of Dreamtime Return, the rhythm a little more shivering but always also morphic.

Steve Roach has the gift to develop his visions, his feelings with a musical dexterity which makes of him a unique character in this big sound sphere that is EM and its derived. From album to album, he refreshes his ideas which bear a new skin in some sonic envelopes textures which seem endless and especially always innovative. Of course we shall rather have the impression to hear his wonderful universe paraded in our ears throughout the conquest of Spiral Meditations, except that there is and will always have an element of magic which goes out again from it and which makes of the music of Steve Roach be as an old friend whom we are always happy to hear.