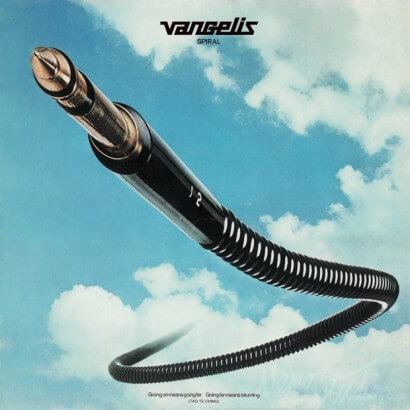 Vangelis is a most underrated artist of the century. He is almost barely known in the United States where culture is always at an all time low when it comes to electronic music. But in Europe he is well known and it is here where Vangelis set base back in the 1970’s to produce some of the most impressive electronic albums of our time. To me Spiral is a signal of growth and maturity as an electronic artist, since Vangelis always grew with every turn of technological advances and it is here that we get to hear the fruit of his works. All after attaining new sequencers and the now very famous Yamaha CS 80. This synthesizer has become his trademark ever since. Lets examine all of the songs in this landmark album Spiral.

Spiral – Truly the electronic equivalent of Bach’s Fugue in D Minor. A very complex work, the fact that this is 1977 and electronic equiptment was still in its infancy, clumsy and difficult to use at times and not to forget unstable as well. The complexity of the overlaping sequences is breathtaking and very classicaly maniputated into what sounds like an orchestral piece of major magnitude. It is hard to believe that most music back in those days where done with a 16 track reel to reel recorder. The youth of today could never match those abilities even with all the new technological advances in synthesis or MIDI sequencing available, that is without making it into a dance song or an electronica dance piece for the next upcoming rave.

Ballad – A very calm and relaxing piece full of emotional tones and very rare at the fact that it actually features Vangelis singing, not real lyrics but none the less singing of some kind. It is a very french sounding composition.

Dervish D – This song was inspired by the Dervish dancer who by his whirling realises the spiraling of the universe. Vangelis has always had a facination towards space and the planets and stars. A star has actually been named in his honor. Here is another example of how a suquencer began to be used in very intriquete ways. This is very futuristic music indeed, and the beginning of what the future would bring in the 1980’s.

To The Unknown Man – Most of us remember hearing this song at one point or another playing throughout an episode of Carl Sagan’s Cosmos. It is truly a beautiful piece, emotional and almost like an anthem. Vangelis has always had a a knack for coming out with songs that inspire the soul and makes you rejoice as in an anthem of some type.

3 + 3 – One last attempt to demonstrate the proper use of a sequencer to carry out the song with a inique beat or pattern. Truly the beginning of a new age in electronic music.

Spiral is truly a magnificent album and a must in any collection whether you are a classical music fan or an electronic music enthusiast. Learning the music from the past is a joy when an album like this is a masterpiece for the ages. The memory of those early electronic sounds will never be forgotten as long as strive to understand what the old masters achieved with bear skins and sticks.