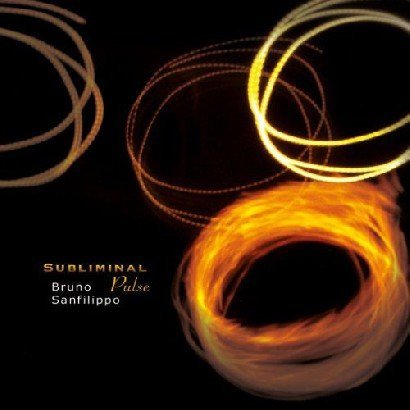 The Argentine Bruno Sanfilippo is a musician, a sculptor of sound and a composer since nearly 20 years. Similar to Vangelis’, his music floats above our dreams with soft harmonies which wind around sometimes abstracted, ambient or simply melodious structures. Subliminal Pulse is his 12th solo album since his very first one realized in 1991 (Sounds of the Light) and his very 1st to be released by the Californian label Spotted Peccary. He depicts Subliminal Pulse in these terms; “Sometimes, the poetic language of music reveals what cannot be seen. It shows a reality that has nothing to do with words. With my electronic instruments I take the universe’s ‘Subliminal Pulse’, and I try to build a bridge between my inner pulse and the pulse of the outer space.” It’s a very nice way to define this very poetic and oniric album, among which 9 tracks enclose delicate harmonies which move like feathers in space.

The Third Geometry introduces to the soft poetic universe of Sanfilippo with a very fine ethereal line of synth which oscillates of its sparkling chant on a delicate structure livened up by a mix of soft percussions and pulsations. It’s a mixture which shapes a soft and suave rhythm with strikes that roam in an iridescent synth mist, weaving an eclectic unreal universe both ambient and tribal. A musical world imprints of mystery with this electric mist which bewitches on a sparse rhythmic structure and a soft synth so near astral singings. Santa Luminosa’s intro is tearing by a heavy metallic reverberation before finding again the tranquility settled by The Third Geometry. It’s an oniric peace of mind with this soft and bewitching astral singing that the synthesist who now live in Spain likes to sculpt from his synth. A little as on The Third Geometry, the delicate rhythm of percussions and the twinkling arpeggios which skip among pulsations is ennobled by synth layers which sing as celestial mermaids and lamentations of violin, creating a thousand of illusions and passion from a Middle East tribal universe. Continuing in the same vein, but with a clearly more ambient approach, Spirit Allies flood our ears of a sulphurous melody which bewitches with its lamentations sculptured in the tones of a synth with soft poetic tendencies. It’s a superb track impregnated by a strange serenity, quite as Slipped Time and its piano from which solitary notes pierce drill a beautiful mellotron mist as well as Pulsum Sacrum and its great choirs which float around astral bells and synthesized pulsations à la Vangelis. It’s quite nice!

It’s with long synth breeze in slow oscillations that Intrinsic Fluctuations begins. Synth layers are interweaving to form an oblong mist procession where the echoes of an odd tribal world can be heard midway. Delicate lonely arpeggios sparkle there and skip delicately on a glass fauna, among misty flute breathings that sound like Berber tribes tones and of repenting souls walking towards an enchanting world where oasis are outlining on the horizon. Imprint of mystery Subliminal Pulse evolves on nice pulsations surrounded by oniric spectral chants. Like in Alchemical Powers, the rhythm is hardly present if it’s for a delicate alternation in fine pulsations which beat in a universe buried by a subliminal tenderness. Mantram is another delicacy coming from Bruno Sanfilippo’s hybrid tones synths. Between tearful lamentations of heart-rending violin and a mystic morning mist, Mantram unwinds as an ode to sadness or a call to melancholy.

As Bruno Sanfilippo describes it so well: Subliminal Pulse is an astral musical journey where inner impulsions try to converge on those more cosmic. At this level Subliminal Pulse is an opus of an infinite tenderness where astral chants are moulding perfectly well to the soft ambiances of a world of which tribal fragrances seem to be the key of our spirituality. Like most of the Spotted Peccary label works, Subliminal Pulse sails between celestial ambient and progressive New Age, evolving through a strange and stunning fusion of a cosmic and tribal universe with delicate rhythms, breaths and Berber lamentations and a synth divided between its singings of celestial sirens and the tears of its violins which shape strangely unreal odes. It’s a nice nightly opus where reminiscences of Vangelis can be heard here and there, but on more honeyed than complex structures.

The Edge of a Fairytale ›