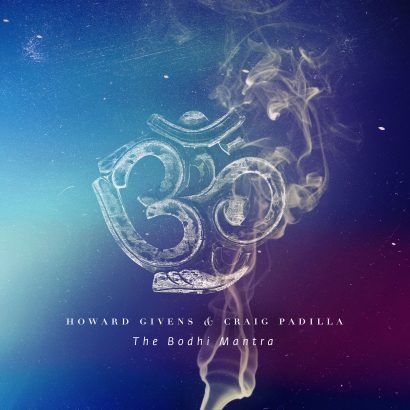 The Bodhi Mantra shines by expansive electronic meditations, flowing smoothly into the infinite beyond. Three songs to bring you bliss, music that brings noble emotions and peace. Bodhi is a Sanskrit name translated as “enlightenment” or “awakening” which relates to a Buddhist concept, synonymous with the state of nirvana, being freed from hate, greed and ego. The term mantra is traditionally said to be derived from two roots: “man,” to think; and the action-oriented suffix “-tra.” A mantra can be considered to be a linguistic device for deepening one’s thought or in the Buddhist context for developing the enlightened mind.

1. About the album The Bodhi Mantra

The music on The Bodhi Mantra is all electronic…

…there are no human vocal expressions heard on this album. In addition to the label’s usual downloads in 24-bit Audiophile, CD Quality Lossless (FLAC, Apple) and 320kbps MP3, and streaming audiophile formats, The Bodhi Mantra is available in a collectible 12 inch LP format, including a blue-colored disc, inside an exquisite package design by Daniel Pipitone with a richly printed jacket and sleeve combination. There will be no physical CD version for this release.

The Bodhi Mantra is the latest collaboration of Howard Givens & Craig Padilla, previous titles include Being Of Light (2017), Life Flows Water (2015), and Spirit Holy Rising (2015). In addition to his own work and as a sound engineer/producer for many other artists, Givens has been involved with the Spotted Peccary releases of such Padilla titles as The Heart of the Soul (2012), Below the Mountain (2008), The Light of the Shadow (2006), Genesis (2004), and Vostok (2002).

…brilliance, magnificence, and ease as you listen to these celestial sounds. Listen to eliminate the illness and suffering of all sentient beings, to provide all their necessities for health and happiness, and mostly just because it simply sounds sublime. Thanks to the original vows of the Buddhas and Bodhisattvas, a miraculous force resides in mantras, so that by pronouncing them one might acquire insight without limits. As nebulous as the clouds, these electronic soundscapes are ethereal meditations with many levels of symbolic meaning that allows relaxation by moving you to a tranquil and romantic mood.

Practicing meditation may be helpful for a variety of conditions ranging from insomnia and high blood pressure to anxiety and low back pain, or just to help you learn to relax in the moment. Synthesizers evoking space-age heartbeats offer a meditation on universal mythology, inspired by ancient dances, and probes the mysteries of the cosmos and glacial chords, soaked in cathedral-like reverb, all to bring profound inner peace and induce unwinding, improving one’s mood and leaving the listener revitalized.

…it is ambience as art, presenting an implied narrative without the need for words, welling synthesizers slowly building, at the pace of breathing in and out. Slowly a lub-dub at the pace of a heartbeat emerges. “Prana” (13:01). Prana is seen as a universal energy which flows in currents in and around the body, and is also a word for breath, considered as a life-giving force. In the ancient practices, prana has been compared to fire just as flame arises out of kindled fire and gets dissolved in the sky, so also curiosity about the mysteries of the universe. The track fades slowly at the end.

The second track begins and is sustained…

…throughout with repeated pairs of tones, step by step. “Serenity, The Peaceful Place” (9:29), which has the truest quality of being peaceful and calm, the absence of mental stress or anxiety. For many years people have wanted to hear the music that brings to mind that which turns their stress and tribulations into blissful gold and thus become tranquilly enriched. Here they are, the secrets of alchemy. The gift continues in the two step pattern, the glow expands ever widening into the horizon, like sunrise. I think I hear celestial horns, and reeds, and strings. The ocean teems with life below, it is not as dark as I expected, and filled with bioluminescence.

When we look back, sometimes we find ruins. Echoes. Remnants. “Leaving Behind the Now” (18:50) is a delightful piece of classical space music, it creates a hallucinatory feeling of floating through infinity. This music conjures up the idea of sound waves hurtling through space, and the possibility of making sonic contact with other beings from the galaxy. This is space-travel in the most ecstatic meaning of the term. The listeners are rewarded by the benefit of their imaginations and the power of sound to convey the music of the spheres.

…Spotted Peccary Music, has been recording, crafting, and producing electronic music and sound spaces with an authentic, organic, tangible expression, for over 30 years. He is also a gifted visual artist. Howard focuses primarily on artistic expression through the counterpoint of color, space and rhythm encompassing both music and photographic-based arts. He has created and produced the illusion that conveys the listener to another state of experience for his own projects, as well as with many artists on the Spotted Peccary Music label, under the name of Brain Laughter, and for other artists in the field of ambient electronica and other genres of music including classical, rock, and jazz. Some aficionados crave all the details of his music making equipment, he is the master of the Roland Jupiter 6 and MKS-80, Sequential Prophet T8, Oberheim Matrix-12 and early Juno synthesizers.

He has been working with the Moog Little Phatty, Slim Phatty, Voyager, Dave Smith Prophet 08, Sequential Circuits Pro One, and Mattson, Doepfer, Synth Tech, and Bubblesound Modular synths. The analog sounds are blended with digital sound sources from the Novation UltraNova and the Nova II, Roland JP-8080 and others. Non-synth sound sources include Martin, Fender, and Parker guitars, Steinway B Piano, Taos Drums, various percussion, all recorded with great mics from Neumann, Sennheiser, and Crowley and Tripp passing through TRUE Systems preamps, API summing, API 2500, Inward Connections OPT1A’s, and more. Effects play an equally important role in solidifying the electronic space, and for this he turns to the proven effects devices of Eventide and Lexicon.

Craig Padilla is inspired and influenced by many things…

…including the lands surrounding Coeur d’Alene, Idaho where he once resided. He is an internationally celebrated and award-winning electronic music artist. For more than two decades he has been performing live and recording his own music using many vintage analog and newer digital synthesizers. From New Age to Trance to Electronica, his style reflects the classic electronic musicians of the future past, such as Wendy Carlos, Klaus Schulze, Tangerine Dream, Kraftwerk, Steve Roach, and many other pioneers of the electronic form. You have probably heard him many times on various television, theatrical, and film soundtrack productions. His solo and collaborative music is heard on XM Satellite Radio and radio stations throughout the US, and on celebrated radio programs such as “Echoes” and “Hearts of Space” repeatedly, as well as frequenting the fabled and fabulous Brainvoyager transmissions.

The moon rises, and the stars awaken. You no longer know up from down. You cannot see the forces that support you, but you trust in them to carry you through. The sound of The Bodhi Mantra can help you learn to relax in the moment. You wonder how far the winds have carried you. Looking back for landmarks, you see none. You are above the endless ocean, and in this twilight there is nothing to see. You fly onward. The Bodhi Mantra is perfect for activities such as walking in the city, taking a break at work, waiting around, and going to sleep. You fly on into the freedom of the bliss wave.

4. Where to buy The Bodhi Mantra?

You can buy the album The Bodhi Mantra (available in vinyl LP, digital download and streaming formats, with no CD version) at the store of Spotted Peccary Music and Bandcamp.